Posted by Eddie Pasa on September 25, 2020 in Movie Reviews / No Comments

Wife. Mother. Daughter. Chef and server. Laundry mistress. Transport provider. Schoolteacher. Neglected and unaided. This is Holly’s (Azura Skye) life in The Swerve, a title which stabs at us literally and figuratively while her last vestiges of sanity slip away like the sun’s rays before nightfall. As we watch, we understand that we can’t do anything about it as an audience, but fewer films have ever provoked such feelings of powerlessness in the face of the inevitable. 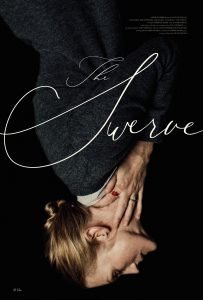 Writer/director Dean Kapsalis crams a suffocating fog of discomfort into every second of this film, putting us next to Holly as her insomnia-plagued and damaged existence worsens with every erratic breath she takes. She’s utterly alone in carrying the weight of two spoiled boys, a constantly late-working husband, a ne’er-do-well sister, and the ghosts of past abuse. And it doesn’t help that she’s starting to see things which may or may not be real, like vermin in her kitchen or her husband groping a female co-worker.

Her life is already in swerve, veering off any normal highway and into uncharted forests where no light can penetrate. The oncoming darkness isn’t just engulfing her; it’s consuming her with a hunger saved for the most undernourished of creatures desperate to feast on the most minuscule of crumbs. A mix of escalating events – including the titular swerve which blasts off a wave of paranoia on top of how she’s already feeling – pushes her further into instability, her recklessness turning straight-up illegal as she initiates a dalliance with one of her students. 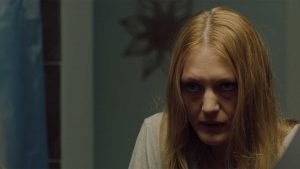 But that’s usually how it starts, isn’t it? Something small – in this case, a garbage-diving mouse – makes just enough of a hole in one’s sanity for the undercurrent to come leaking through, eventually turning into an unstoppable flood. Azura Skye cuts deep with her portrayal of a woman lost, stumbling and reaching blindly for any kind of outstretched hand but only finding despair and betrayal. She wields a blank, empty passiveness which starts to erode gradually, barely containing Holly’s contempt and rage at herself and those around her. Skye has the ability to emote Holly begging for someone to listen or to help her without fully committing, withholding these pleas for the sake of a stronger appearance, which the film undoes with each passing second.

As a character, Holly constantly gives, but it’s not so much giving as it is people taking. Husband Rob (Bryce Pinkham), sons Ben (Taen Phillips) and Lee (Liam Seib), sister Claudia (Ashley Bell), and student Paul (Zach Rand) all want something from her – clean clothes, their food on the table, sex – and she can’t do anything but dole these parts of her out like so many Halloween treats. But what happens when the candy tray is empty and people are still reaching for a bite? Like Jennifer Lawrence’s character in Darren Aronofsky’s mother!, there’s only so much of her to go around before the walls start breaking down and the fury drowns everyone unfortunate enough to be in its path.

Kapsalis makes her the centerpiece with no action occurring outside her presence, and Skye’s formidable talents don’t just carry the film – she fully envelopes us in Holly’s slowly degrading soul. He stingily scatters hints throughout to make us question if she’s actually experiencing events versus dreaming awake and justifying her behavior with her imagination. Once these seeds of doubt are planted, we’re stuck in a nightmare without any grip on the tangible. This is where Kapsalis makes his most devastating play, turning The Swerve into a powerful tragedy, slamming into us with the force of a bullet train with no one at the brakes, heading straight on its rails toward a damning destination.