Posted by Eddie Pasa on October 2, 2020 in Movie Reviews / No Comments

Writer/director Brandon Cronenberg continues his father David’s storied tradition of turning horror on its ear with Possessor, a mind-frying bender of a head-trip that pulls absolutely no punches. Cronenberg joins the ranks of modern horror auteurs Jordan Peele, Ari Aster, Karyn Kusama, and Robert Eggers in making horror cinema a visceral, dread-filled ride through the human subconscious. It isn’t the kind fueled by demons, spirits, or hockey-masked killers (although those types of movies definitely have a place in my heart); instead, Cronenberg and others like him drill down to the places in our own fragile psyches and egos which reveal ourselves as the true monsters we fear. 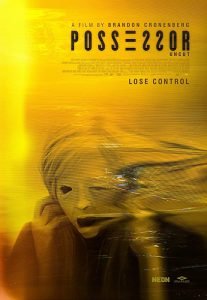 Oh, yes, there’s still a brutal killer at work, but it’s not who you’d expect; part of the unease of Possessor is seeing the faces behind the gory acts perpetrated onscreen. These faces belong to Andrea Riseborough and Jennifer Jason Leigh, seasoned actors whose beauty provides a stark contrast to what their characters are paid to do, considering that Tasya Vos (Riseborough) works for Girder (Leigh) as an assassin for an unnamed company. Cronenberg’s sci-fi angle (which competes with – and possibly bests – that of his father’s films Scanners and Videodrome) takes us into a world where the technology exists to facilitate total brain takeover, the host consciousness being a passenger while Vos drives the body to carry out her task.

It’s a thrilling conceit, to be sure; the execution (no pun intended), however, is just as mentally and physically messy as you’d expect. There’s nothing clean about what Vos commands her host bodies to do, especially after the job’s done and she gives the command: “Pull me out.” Worn down from doing this for so long, she decides to stick around to see what happens to the first body we see her inhabit in the film’s opening, thus prompting Girder to pull her in for a serious baseline check afterward. It’s not like The Matrix where “the body cannot exist without the mind” – she holds on as long as possible before jacking out and returning to the safety of Girder’s laboratory. 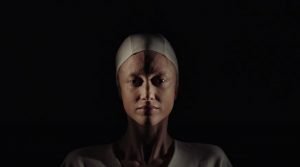 Vos is established as a risk-taker, clashing solemnly with the side of her which comes home to a loving husband and child. Riseborough plays Vos’ struggle well, knowing full well she’s one step away from screaming off a precipice in her mind but unable to do anything except function in whatever role presents at the time. Whether it’s being mom and wife or doing surveillance and dogged prep work before a job, she just does. She’s as much of a shell as the bodies into which she uploads herself; we don’t see anything of her personality or her true nature, which is what seems to be lurking slightly beneath her dulled façade.

The bulk of the film’s story centers on her next hit, wealthy businessman John Parse (Sean Bean) and the man Vos is going to take over, Colin Tate (Christopher Abbott), who’s dating Parse’s daughter Ava (Tuppence Middleton). Already pegged by Girder as a burnout, this is both a job and a test to see if Vos can still do what it takes to get it done. As is wont to happen in science-fiction films like this, something goes awry and Tate winds up in the driver’s seat where he belongs, Vos shuffled to the back and being an unwilling participant as the rest of the action unfolds. 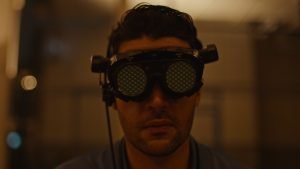 Possessor preys on our insecurities as professionals, lovers, and family members, leaving us wondering if we’re doing anything right. A long sequence dedicated to Tate’s retaking of his own body combined with Vos’ consciousness getting in the way is a startling jolt with all the effectiveness of being hit over the head with a shovel. This portion underlines how clumsy we are as humans, how ultimately helpless we are compared to the whims of what George Carlin called “The Big Electron.” It’s the film’s harrowing centerpiece, hinted at on the film’s posters with a disturbing still of a distorted face; there is no comfort to be found while sitting through this sequence, especially when everything’s out of place physically, mentally, and aesthetically.

The film revels in this unsettling feeling, working in the spaces which best belong to the unknown. Brandon Cronenberg disorients us and dazzles us with fast pacing amid languid, unpleasant visuals forcing us into the recesses of humanity and grasping for some semblance of normalcy or light. Once we’ve made peace with the fact that nothing is going to be normal in Possessor, it’s almost too late; our resistance breaks down just in time for the most chilling of climaxes, where humanity is clinically perverted to the point of nausea. It’s a nausea not brought on by looks or sound; it’s instilled in us as its final parting blow, that there isn’t any length people will go to to achieve their desired ends. 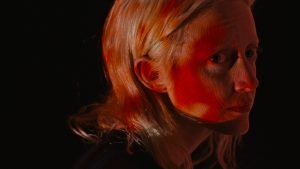 Rare are the films which haunt you for weeks after viewing; Cronenberg has achieved that with Possessor, a cruel and appropriately passionless look at a new world where assassinations are carried out by the unwilling. And it’s not like they can fight back against the puppet master – Vos is in full control, host consciousness be damned. There’s nothing letting any character – or even the viewer – off the hook, which is the absolute strength and soul of this film. Cronenberg delves into the darkness in our minds and dances without abandon from the opening frame to Possessor’s cold-blooded ending, finding an eye-opening balance between the real and the dreamlike. Only it’s not a dream – it’s a waking nightmare from which we are saved only by the film’s closing credits. Terrifying and mesmerizing, Possessor stands as one of the year’s best films, thanks to its sheer frankness which embeds itself in our minds and haunts us when we least expect it.