Posted by Eddie Pasa on September 15, 2020 in Movie Reviews / No Comments

Author’s note: the MPA rating description claims “sexual content throughout” and “strong language,” but that’s not entirely true. I’ve seen male-fronted comedies receive PG-13s with the same language and situations found in The Broken Hearts Gallery, and the worst ratings factor those films got was “some crude language” or some other equally innocuous reason. At best, there’s maybe one hard-to-hear f-bomb, medically correct (although comedically reversed) anatomical references,  maybe 2 or 3 FX Channel-worthy obscenities, a brief discussion about masturbation (see the trailer below), and some under-the-sheets making out. I don’t know what the MPA is playing at giving this female-fronted comedy these kinds of descriptors, but if people took them seriously (and some do), they’d think this movie was all about sex-crazed women and wouldn’t give it a second look.
Those people would be idiots. 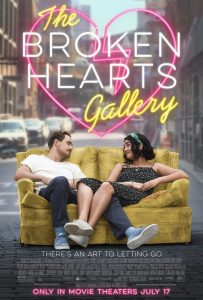 Straight up, The Broken Hearts Gallery is one of the most enjoyable, effervescent movies ever, thanks to the sharp wits of screenwriter/director Natalie Krinsky and star Geraldine Viswanathan. These two have been able to find what romantic comedy legend Nancy Meyers has never been able to in her many years of putting affable screen stars in awkward situations, and that’s an actual heart and soul. Sure, Meyers’ films feature the likes of Mel Gibson and Helen Hunt, Diane Keaton and Jack Nicholson, or Anne Hathaway and Robert DeNiro, but her kind of bubbly froth is superficial at best, and her films always feature the privileged and wealthy.

Krinsky has written and directed the totally anti-Meyers movie by featuring characters pushing to create something from nothing, whether it’s an art gallery made of relationship castoffs or a boutique hotel in the middle of Manhattan. What’s more, these roles are inhabited by enchanting and absolutely adorable actors able to carry subtle weight without using it as a weapon. There are secrets both Lucy (Geraldine Viswanathan) and Nick (Dacre Montgomery) are holding close to their chests – Lucy’s is hinted at early in the film during a pre-title gabfest – but they’re both used in ways you won’t understand until the end. But the film’s not necessarily about those secrets, so forget that for now. 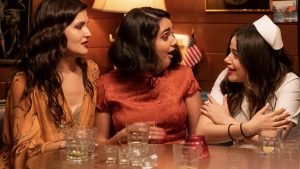 This pre-title sequence introduces us to the winning and hilarious trio of friends anchoring the film. Lucy and her besties – “stay-at-home model” Nadine (Phillipa Soo) and acid-tongued Amanda (Molly Gordon) – have been with each other through thick and thin, and their longtime friendship shows with every jab they throw at each other and every moment shared between them. Nadine keeps her dating life away from the group while Amanda forces boyfriend Jeff (Nathan Dales) to not speak to any other women (which is [comically] unfortunate, because we only see him in their company). Lucy seems to be the one who’s under their wings, seeking advice or comfort from them when relationships go south. And each time it does, Lucy collects some random item from the now-ex, resulting in her apartment room turning into what might be considered a hoarding situation.

Through crazy random happenstance, she encounters budding hotelier Nick at very inopportune coincidences – the first while she’s sobbing from her breakup with Max (Utkarsh Ambudkar) and a sudden dismissal from her job, the second while she’s about to confront Max at a restaurant. From here, Lucy and Nick turn from character development sketches to fully fleshed out, with punchy optimist Lucy balancing out Nick’s matter-of-fact and measured persona. He sees things “coming from a mile away and (manages) expectations” while Lucy gins up an idea for an art gallery she can put in Nick’s burgeoning hotel – a collection of donated items from strangers’ defunct relationships, each with its own short story. (One story is so heartbreaking, but as Ricky Jay’s opening narration in The Brothers Bloom puts it, “There’s a sweetness in the mix.”) 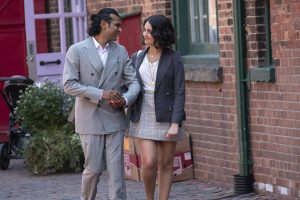 There are only a scant handful of scenes which threaten to earmark The Broken Hearts Gallery as your standard rom-com. Don’t be distraught; the film actively takes the mickey out of itself in one of these exchanges, but these little things are easily overcome by Viswanathan’s quick-draw delivery, a staple of hers brilliantly shown in TBS’ comedy “Miracle Workers.” She gives Lucy a determined joie de vivre which can’t ever be extinguished, always ready with a fast riposte and patter which dazzles the ear and makes us smile. Not only does her demeanor shine, she also makes every scene of the quirky, vivacious script count in ways that higher-budgeted rom-coms reach for and fail to attain.

She has that something which makes her perfect for this role, whether it’s a well-timed reaction (subtle or explosive) or a dashed-off one-liner delivered with preciseness in its clarity and strength. Her abilities allow her to carry the film seemingly effortlessly and breezily, and you can’t help but believe every word of it. Even in more solemn, revealing scenes, she balances a vulnerability with the tiniest shade of a guard put up which very stealthily gets let down, if you can dig it; she’s excellent at transposition and transition, and it’d be a crime if filmmakers didn’t add her skills to their arsenals. It’s not just that she’s funny; she has a giving spirit which doesn’t just make her look good, but others sharing scenes with her. 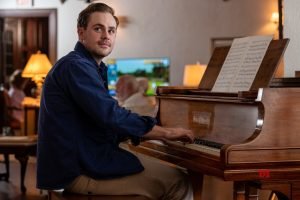 Krinsky has chosen sturdy performers to back Viswanathan up, from Dacre Montgomery (in an absolute 180° turn from his character in Netflix’s “Stranger Things”) to Bernadette Peters (who pitches in with a divinely Madeline Kahn-esque performance) to Molly Gordon and Phillipa Soo. The latter two give such wonderful life to their roles, it almost makes you wonder if short-film expansions of their roles from their own perspectives might provide even more entertainment, à la Rosencrantz and Guildenstern Are Dead. Honestly, this is one of the first few times I’ve ever considered this about a movie’s supporting roles, owing to how well Krinsky has fashioned her characters and the film itself.

Of course, the film carries an absolute blast of humanist themes, most notably coming to terms with one’s own grief. It sits in this ethereal space where we know it’s there and is being dealt with, and it’s just as much of a character as the ones the actors play. However, it never threatens the optimism Lucy shares with the entire film; it’s just something each character has hanging over them, coming to the fore at certain times and recessing just as quickly. Krinsky’s script is fascinating in this regard, that the notion of breakups – whether romantic or otherwise – truly become so much a part of who we are, we often forget about the trauma involved or we find innovative ways to incorporate it into our lives. 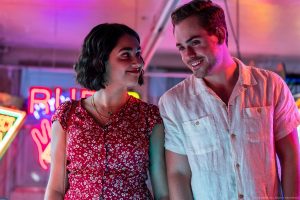 It’s not often that I watch a screener or a movie twice in a 24-hour timeframe. The first time I watched The Broken Hearts Gallery was for this review. The second was just to let the film’s charming brio – which could only be described as a genuine wave of warmth and sparkling pep – wash over me and to solidify what I already knew: The Broken Hearts Gallery is a fantastic delight, capable of winning you over from “Vroom-vroom, bitch.” (You’ll understand what I’m talking about.) For the film’s 108 minutes, you’ll be whisked away into Lucy’s world in which hopefulness reigns amid the sham of business and heartache. There are a lot of laughs and touching moments, but they’re not of the standard variety, nor are they throwaway artifice. So much more is at play here than just being a “does the girl get the guy” kind of thing; it’s a cutting down to the roots of “why” and choosing to grow a well-pruned garden from them. The Broken Hearts Gallery is a welcome surprise in an overstuffed genre featuring a tart-tongued script and Viswanathan’s talents which make the script flourish and pop.