Posted by Eddie Pasa on January 3, 2020 in Movie Reviews / No Comments

Typically, the January movie slate is full of either awards nominees or soon-to-be-forgotten films dumped hastily into theaters. Curiously, the new installment of The Grudge falls into neither of those categories, being an entertaining visit to familiar grounds. It winds up as the best of the Grudge films since the 2004 American remake, with an involving story and plot giving us hope its victims will turn out differently than the rest. 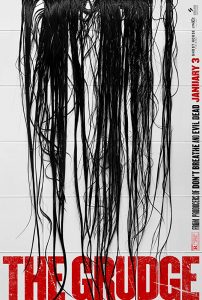 All told, there have been twelve predecessors to this film, nine in its native Japan and three American studio-backed films, which even included a “versus” film involving the villainous spirit from the Ringu series. The spirits in The Grudge still operate as they did previously; “If someone dies in the grip of a powerful rage, a curse is born,” goes the opening text of these films. The curse stays in its birthplace, the spirits of the murdered giving gory ends to those who encounter them. But what happens when someone from a different country is cursed and tracks it back home with them? We saw a bit of it in the American sequel The Grudge 2 and the entirety of the direct-to-video The Grudge 3, but this new film starts it all over again and gives American roots to this Japanese curse.

This is where writer/director Nicholas Pesce’s incarnation of The Grudge finds its home. A prologue providing a quick glimpse of Japan and the cursed house from the 2004 remake serves to set up how Fiona Landers (Tara Westwood) is caught in the curse’s grip (literally) and returns to her family in America. Not only does a title card inform us that we’re in 2004, the phone conversation she has solidifies that what we’re seeing takes place prior to the 2004 film’s events (listen for a certain canonical character’s name). From there, we skip ahead to 2006, following Detective Muldoon (Andrea Riseborough) as she investigates a new spate of deaths and disfigurements connected to Fiona’s homecoming. 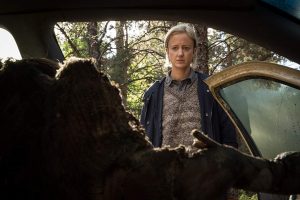 The film bounces from 2006 to points within the two years prior to Muldoon’s arrival into her new town, demanding our strict attention. This isn’t some “leave it on in the background” movie; your eyes are required to track Muldoon’s foolhardy investigation into the events surrounding Fiona and her family’s house at 44 Reyburn Street (the number 4 being a symbol of bad luck in Asian countries, the word itself a Japanese homophone for “death”). We also follow the plights of several different families: the Landers, the Mathesons, the Spencers, and Muldoon’s own, all touched by this cross-continental curse.

Pesce dispenses with the elegance of Takashi Shimizu’s Ju-On/The Grudge films, filling his frames with a suffocating atmosphere which leads to scares and screams galore. Aided by washed-out, mud-colored tones and electric cinematography which always leaves space for potential frights, Pesce goes straight up the gut and turns The Grudge into a solid unfolding mystery film with Andrea Riseborough firmly at the helm. Her performance as a weary, widowed single mother and obsessed detective gives us a firm handhold on the proceedings, her expressionistic eyes and grounded delivery enhancing her believability and rooting us in her as she turns over stones she shouldn’t. 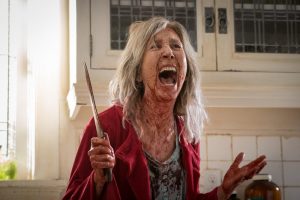 The time-flipping is only hinted at by Muldoon’s digging; long stretches of the past involving the Landers, their realtors, and the new homeowners (Frankie Faison and Lin Shaye) come and go at their own whims. It’s not like this is new to the series; all films since the 2000 original feature non-chronological tales unfolding and adding to the thickening stew before it boils and explodes in a fury. But where Pesce differentiates his iteration of The Grudge is in its characters, all of them easily identifiable and sympathetic. Real estate agent Nina Spencer’s (Betty Gilpin) anguish over her pregnancy and how she and her husband Peter (John Cho) deal with it made their story more personal for me, having gone through something similar. There is love throughout this picture, real love for the characters and their screen opposites, whether it’s an interracial couple barely hanging on after 50 years of marriage, Muldoon and her son Burke (John J. Hansen), or the aforementioned Nina and Peter facing a difficult decision.

Of course, all of this is just to set them up before the titular grudge has its way with them; that it succeeds in making us care is where this film hits its sweet spot. Yes, once these spirits are encountered, stuff goes sideways and some genuine scares happen; a practical effect concerning one character’s walk through a room is a certain highlight. We know they’re doomed and it’s only a matter of time, but walking meaningfully alongside them and taking the time to give them depth makes it count, at least for me. 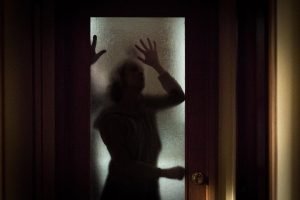 But what would a Grudge movie be without its ghost story trappings and the horrifying death rattle of a choked-out victim? Pesce teases us agonizingly, making us wait on tenterhooks for the inevitable. Cinematographer Zachary Galler makes full use of the anamorphic widescreen frame, with subjects holding our focus while shadows and ominous figures shift in the background. The palette is almost completely devoid of reds, making blood stand out even more when it’s spilled. Colors are muted in favor of a more warm, brownish-orange motif, firmly cementing a countryside feel and eschewing the stark whites and grays of big cities.

Pesce’s The Grudge isn’t just a bowling alley full of rote characters waiting to be knocked down. By not making caricatures or mere shells of characters like those found in ’80s slasher films, he makes his brand of horror even more effective without having to resort to excessive gore. In this, The Grudge is an anomalous mixing of emotion and terror in a mainstream film, revitalizing the franchise and giving us more reasons to keep the lights on at night.