Posted by Eddie Pasa on January 15, 2020 in Movie Reviews / No Comments

The thing about Dolittle is this: we’ve seen it all before in numerous children’s adventure films. Dolittle doesn’t add very much to the cinema conversation, but it’s not meant to do so. It is purely meant to whisk its intended audience away with grand – albeit excessively computer-enhanced – escapism and fun. And many, many butt and fart jokes. To this end, Dolittle succeeds. Yes, adults may look at the film through older, jaded eyes. Maybe we’re too used to the sight of Robert Downey Jr. augmented by better, more realistic-looking CGI in Marvel movies. Others may be too filmmaking-savvy, knowing the ins and outs of similar stories, dialogue redubbing, and the varying shades of “keep ’em interested” performance. You know – big eyes, big smiles, and basically wrangling a fifty-ring circus with other competing ringmasters. 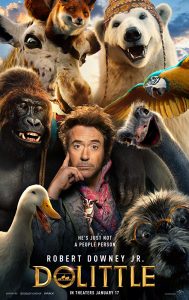 But step back and remember: this is a kid’s movie. Specifically, it’s writer/director Stephen Gaghan’s take on the kinds of movies he grew up watching in the ’70s and ’80s. It’s not without a modicum of darkness, being about an impressive doctor becoming a recluse after losing his wife, kids being forced to hunt, and a political assassination attempt. Of course, this is a kid’s movie coming from the writer of Traffic and Syriana, so expect a little more than the usual peril on the menu.

Gaghan channels his inner Chris Columbus (writer and director of children’s fare such as The Goonies and Harry Potter and the Sorcerer’s Stone) and sends the famed British doctor on a mission to save the Queen (Jessie Buckley) from a mysterious poisoning. However, Dolittle (Downey Jr.) hasn’t stepped outside his gates since his wife Lily’s (Kasia Smutniak) untimely death while exploring the high seas, choosing only to take care of the animals in his sanctuary with whom he can speak and hold conversations. You can see and feel the infamous “mouth close-up” language transition made famous in Judgment at Nuremberg and The Hunt for Red October coming a mile away to take us from Dolittle’s squawks and chitters to full English in the early minutes as a quick way of getting to the voice cast. 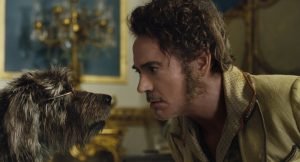 This is where my own aforementioned “older, jaded eyes” have to take over, as this transition is pretty much what’s wrong with Dolittle – it’s a film so full of tried-and-true film visuals, but it falls far from exceeding or respecting its varied inspirations. So many moments from other films are dropped in, but not dwelled in properly, sacrificing attachment for movement. We’re shuttled along so quickly from moment to moment, resulting in any story impact or emotion being skated over and passed like an obligatory mile marker.

Through macaw Polynesia’s (“Polly,” voiced by Emma Thompson) opening narration, we get to know Dolittle’s story so we can go straight to the good stuff. Which, of course, consists of Downey Jr. doing his playfully neurotic twitchy thing, similar to Johnny Depp as Ichabod Crane in Sleepy Hollow. Although he carries a good bit more confidence than Crane, the long lack of contact with humans results in him being more than brutally honest, even with the Queen’s young niece, Lady Rose (Carmel Laniado), who has sought him out at her aunt’s request. He shoves away reluctant teenage hunter Tommy Stubbins (Harry Collett) after he brings Dolittle the squirrel he’s accidentally shot. 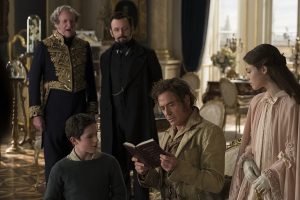 Yes, there’ll be a way Tommy gets into Dolittle’s good graces, and there’ll be a throwback to Lily key to the film’s climax and plot, which is to retrieve a much-needed antidote from an impossible, mythic island. There will be flights of fancy and fights to the death, fulfilling latter-day, big-boom children’s entertainment requisites. The only thing not totally worn about Dolittle? The anthropomorphized animals speak in 2000s slang, a startling contrast to the carriage-drawn, prim and proper, billowy-shirt, 1800s setting of the film.

Action sequences and banter fly past so rapidly, they pile up on one another and don’t give any room for the film to breathe or be. Our human actors might have been given the challenge of having to interact with CGI characters, but their greatest hurdle is interacting with each other. There’s no natural-feeling rapport, no kinship with anyone; each actor looks like they were put in the movie, but it might not have been the same movie or purpose as their scene partners. Grief is one of the main themes of the film, but it’s not given any serious weight beyond the “This was my wife and now she’s gone” kinda feel, or it’s played for laughs with the appearance of Lily’s father Rassouli (Antonio Banderas). Two-shots are full of actors waiting to say their lines instead of playing them, and it doesn’t help that the script goes off in several different directions as we race toward the finish line. 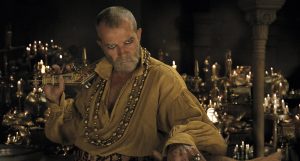 Not only do we have the main plotlines of the Queen’s illness and Dolittle’s loss, but we’ve got to track the relationships of what seems like every animal in Dolittle’s menagerie. There’s some kind of conflict between gusto-filled polar bear Yoshi (John Cena) and timid ostrich Plimpton (Kumail Nanjiani) which repeatedly beats on the film’s funny bone; gorilla Chee-Chee (Rami Malek) has a severe confidence problem; Dab-Dab (Octavia Spencer) doesn’t know the difference between forceps and a celery stalk; Kevin (Craig Robinson), the aforementioned squirrel, narrates his days as if he’s the only sane creature in this mad world; and Polly spends all her time playing mother-hen to everyone, including Dolittle himself. As you can see, Dolittle gives us too much (both scriptwise and cliché-wise) with too little time to process or appreciate what’s going on.

Which, in context, makes sense for its target audience, all of whom can live with lapsed logic and corny drama if there’s a butt-joke in the offing (one of the film’s dubious bits features a proctological exam on a dangerous creature). For them, the film will undoubtedly be a magical delight, a seldom-seen view into the fantastical and whimsical. Kids won’t be given a chance to be bored, because everything’s happening all over and Dolittle doesn’t stop. For their adult companions, this trip into the “RAH-RAH TEAMWORK!” filmic pantheon might prove to be sensory overload in a film which cries out to let its magic be appreciated. There are ingredients for a good movie here, but there’s something about undercooking a film and adding too much garnish to cover its shortcomings.