Posted by Eddie Pasa on December 24, 2019 in Movie Reviews / No Comments

Code 8 started life as a 10-minute short (found here: https://www.youtube.com/watch?v=DqO90q0WZ0M) concerning a dystopian future where humans with telekinetic superpowers aren’t treated like the gods found in comic books. Instead, they’re outcasts, pariahs stuck in dead ends and made to live in squalor, the rest of society unwilling to allow them into their homes, businesses, or social circles. It’s not even like Rian Johnson’s Looper, where “TKs” are vaunted on billboards – although most of the film’s examples are treated as goofs (excepting one pivotal character). 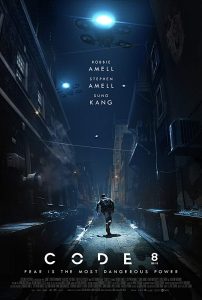 No, the “powered persons” in both the short and its eponymous feature-length extension are dangling from the lowest rung on the ladder, having been othered as unpredictable and hazardous. They’re profiled and monitored by Lincoln City police drones which scream through the skies and carry robotic hit teams called “Guardians.” Not even day-laborer jobs are safe to work when human police officers come calling. At whatever legal jobs they’re allowed to have, they’re subject to managerial mistreatment and low pay. And when that’s not enough, the only option is a life of crime in which their powers are used for theft, destruction, and murder.

Returning story writer/director Jeff Chan and screenwriter Chris Paré pin us immediately with news footage detailing powered people’s sudden popularity to their societal downfall into crime, violence, and selling their own spinal fluid as the latest drug, “Psyke.” The phrase “unregistered powered person” is used in this montage; all you have to do is substitute it with “undocumented immigrant” to get this film’s subtext and where Chan and Paré think humanity is going. Skin and gender don’t matter in the eyes of the police, the drones, and the Guardians; Chan and Paré turn the tables on historical underpinnings of oppression and power structures, seating the privileged on the losing side of the coin. 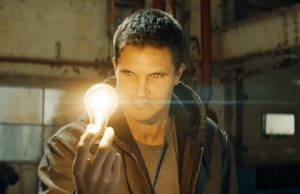 This is where we find our linchpin character, construction worker Connor Reed (a returning Robbie Amell). An “electric” fired from job after job, he falls in with thieves and gangsters to save his ailing mother Mary (Kari Matchett), suffering from a brain tumor which manifests itself through uncontrollable power outbursts and a debilitating skin disease. Recruited by Garrett (Stephen Amell) and his power-enabled team, Connor now earns a more lucrative keep by shorting out alarm systems for their scores. Garrett, tough but sympathetic to Connor’s predicament, also trains him to truly harness and use his power in ways he’d never dreamed.

Hounding them are LCPD Agents Park (Sung Kang) and Davis (Aaron Abrams, formerly a powered person in the short); Park is the more levelheaded and thoughtful of the two, while Davis’ hotheadedness and bravado is exactly what you’d expect of someone hungry for authority. They know someone’s been taking down high-line scores in Lincoln City, and they’re not far from Garrett and his crew. Park and Davis’ raid on a Psyke farm belonging to Garrett’s boss Sutcliffe (Greg Bryk) causes the kind of financial problem which needs to be paid within a week; otherwise, Sutcliffe dies at the hands of his superiors. 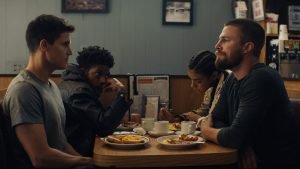 Kyla Kane embodies the film’s heart as Nia, an addict caught between Connor and Sutcliffe, the latter using her for her abilities and leashing her by keeping her strung out on Psyke. It’s not a love triangle, but her formidable power comes at a steep price revealed late in the film, and it’s a power which might help Mary. Connor is advised by Garrett at one point in the film to “Be yourself. If you see something you want, take it,” words which start to guide Connor throughout the rest of the film, even unto Nia, but not romantically or lustfully; he’s only in it to save his mother.

We see the world of Lincoln City through Connor’s eyes, with all its injustice, poverty, and personal ruin. And while he starts to progress with his powers, he also goes deeper in with Garrett, becoming his right-hand man and witness to acts of terror he tries to defuse in his own way. As the newbie and his mentor, the pair of Amell cousins are endlessly watchable thanks to their command of the screen; their presence and rapport allows us to learn more from them with their physicality than their scripted backstories. Robbie makes Connor carry a lot of weight on his person and on his face, the hand he’s been dealt wearing him thin with no relief in sight. Stephen dials back his considerable martial arts skills seen in his TV show “Arrow” in favor of giving Garrett a more confident posture and look, one which exudes strength without having to show it. It’s not a mask or false in any way; he can and will do what it takes to get the job done, and he knows he can get it done. 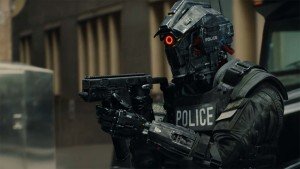 This Indiegogo-financed film spent every dime of its supporters’ money well; in addition to the fine talent in front of the camera, Chris Crane’s production design and Alex Disenhof’s cinematography make the film just as polished as any modern big-budget blockbuster. We don’t get the feeling Crane used shortcuts or favors; each set, each room, and each location feels well-worn and lived-in, and Disenhof captures it all with a practiced eye. Paul Skinner’s editing is fluid and never incoherent, providing Code 8‘s enjoyable rising and falling heartbeat. This film carries the mix of humanity and action seen in Michael Mann’s Heat (which Code 8 also makes sure to reference visually), a film which succeeded in breaking free of arch characterizations and gave us something unexpected and fresh in the heist film genre. Likewise, Code 8 features a new take on a familiar story with undefinable and unique actors; its unforgettable imagery and story grabs our eyes and interest from the first frame and never lets go.