Posted by Eddie Pasa on January 23, 2020 in Movie Reviews / No Comments

The mere mention of “A Guy Ritchie Film” evokes differing reactions from everyone, whether casual fans or considered part of the cognoscenti. Most think immediately of his first two breakout feature films – Lock, Stock and Two Smoking Barrels and Snatch. Both are wittily-written and cannily-directed stories based in London’s criminal underworld, dealing with unsavory types ranging from stone-cold killers to clueless henchmen. For his next two films, he ventured into more personal forays with Swept Away and Revolver; one more London-based gangster film, RocknRolla, would follow but could not match the intensity of those first two.

From 2009 through 2019, his theatrical releases featured adaptations of previously-existing material – two Robert Downey Jr.-anchored Sherlock Holmes films, the endlessly watchable The Man From U.N.C.L.E., a King Arthur story, and a live-action version of Disney’s Aladdin. Now, he returns to original stories with The Gentlemen, which combines a more matured and thoughtful approach with the streak of punky go-for-brokeness which made Lock, Stock and Snatch so memorable. The Gentlemen strikes a tone somewhere between the vine-like intertwining of character arcs from Snatch and the slow burn of Revolver, resulting in one of Ritchie’s best efforts yet. 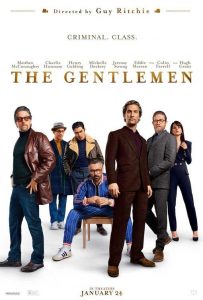 His maturity comes from allowing the characters and story to speak more than the filmmaking itself. Don’t get me wrong – there are more than enough Ritchie-isms to make this film immediately recognizable as one of his own. However, in allowing the characters to take us where the story needs to go instead of the hyperkinetic cinematography and editing forcing us to get what’s being laid down, The Gentlemen brings with it a breathability not present in his other films. For the first time in his London gangster oeuvre, we find Ritchie playing with spaces and to spaces.

There’s not a lot of the slam-bang editing which bolstered Snatch’s undeniable energy. Instead, the energy is generated from the plot itself, where we find Mickey Pearson (Matthew McConaughey) at the top of the cannabis-dealing game and looking to cash out. The underworld being what it is, either he’s going to sell off his business for a fat profit and take a vacation for the rest of his life, or someone’s going to simultaneously create and fill the vacuum by killing him and taking everything. Sure enough, the instant word starts leaking out about his pending retirement, the guns, knives, and bootheels start getting whipped out and given something to do.

The film’s structure bears multiple similarities to Snatch, starting with a prologue taken from late in the movie and exposing the plot through a frame story or narration. Instead of Jason Statham’s growly, gravelly voice explaining the ins and outs of illegal boxing, we get private investigator Fletcher (Hugh Grant) unraveling the secrets he’s discovered to Mickey’s right-hand man Raymond (Charlie Hunnam). Not only does he seem to be a little too happy about knowing everything, he’s also demanding a vast sum of money to keep quiet. Grant makes Fletcher throw his “I can’t wait to tell you all about this because I’m smarter than you” attitude all up in Raymond’s face, brazenly slipping into his home and warding off any threat of violence to his person because he’s in the know. 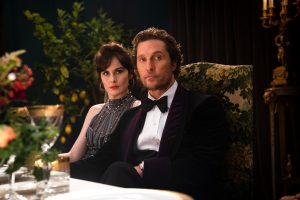 All Mickey wants to do is retire comfortably with his wife Rosalind (Michelle Dockery), who’s just as much of a ball-buster as he is. They’re quite perfect for each other – fiercely protective of their respective businesses (she owns a car-tuning shop) and quick to dispense with any and all bullshit from interlopers. The screen burns whenever Rosalind shows up, as Dockery makes her absolutely magnetic. Her strength and confidence is well-earned, and she never has a quizzical look cross her face, constantly analyzing each person or situation she meets for any weakness – even her own husband.

Two suitors for Mickey’s business come at him from different angles bearing promises of money or violence. The first one comes in the form of Matthew Berger (Jeremy Strong), an American businessman looking for a foothold in the UK cannabis market. The other is loose cannon Dry Eye (Henry Golding), a Chinese gangster’s underling looking to make a name for himself. Also in the mix are four or five youths who rob one of Mickey’s grow houses, endangering their Coach (Colin Farrell) and putting him in Mickey’s path. 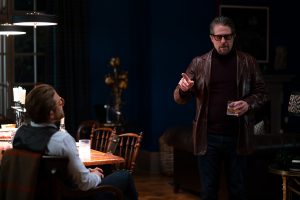 In reliable Guy Ritchie fashion, all of these characters figure heavily into the final denouement; it’s just a question of how they get there. This has always been the fun of his films, to see the brick house being built piece by piece before knocking it down with a grin and a huge blast of TNT. It’s a hell of a return to form for him, and the cast he takes with him is more than capable of handling the constant crossing and double-crossing. “Returning to form” may just be Ritchie doing Ritchie things, but we haven’t seen it in a while; it’s more like the bad penny in your life turning up and wreaking enjoyable havoc in their own peculiar fashion.

Ritchie’s script features his trademark humor and wit, both in dialogue and action. There’s a little more seriousness and slow-handedness replacing his usual breakneck style which is mostly spent on the Fletcher/Raymond framing. Because Fletcher wants to tease everything out for maximum impact and gloating, we’re repeatedly brought back to their one-sided conversation in Raymond’s house, providing breathing spaces between the Whack-a-Mole-esque hits Mickey takes throughout. No matter how fast he dips and dodges, someone’s always there to bring the hammer down on him. These range from the smallest interactions (his snub of a publishing magnate kicks off this film’s events) to gunfights and potential harm coming to his inner circle (his friends and associates are far from the safety he’s promised them). 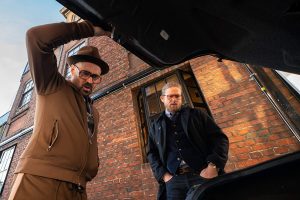 The Gentlemen sees Ritchie incorporating his usual storytelling hijinks with a more grounded sense of realism. Dry Eye’s threat to Mickey’s business and life feels deadlier than Ritchie’s past villains; as hair-trigger as Dry Eye may be, there’s a more calculating side to him which allows the final showdown to be more terrifying than watching it come from a stereotypical psycho. The proposed takeover of Mickey’s business also feels rooted in a colder, cutthroat manner not present in Ritchie’s films. It’s a bleakness which comes with being in the drug scene, complete with armed robbery and overdoses which starkly contrast the lighter parts of the film. This true balance of opposites makes The Gentlemen more thorough and well-rounded, something which Ritchie has attempted before; he finally succeeds, delivering in The Gentlemen his most complete and, dare I say, moving film.