Posted by Eddie Pasa on November 1, 2018 in Movie Reviews / No Comments

In the collected essays titled Suspiria de Profundis (translated: Sighs of the Depths), author Thomas De Quincey writes of three companions for Levana, the Roman goddess of childbirth. Of one of the three, he writes: “The second sister is called Mater Suspiriorum—Our Lady of Sighs… (she) never clamours, never defies, dreams not of rebellious aspirations. She is humble to abjectness. Hers is the meekness that belongs to the hopeless. Murmur she may, but it is in her sleep. Whisper she may, but it is to herself in the twilight; mutter she does at times, but it is in solitary places that are desolate as she is desolate, in ruined cities, and when the sun has gone down to his rest… all that are betrayed and all that are rejected outcasts by traditionary law, and children of hereditary disgrace,—all these walk with Our Lady of Sighs.” 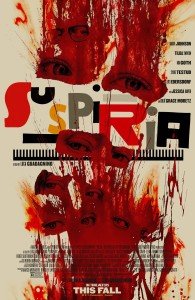 Writer/director Dario Argento used the concept of the Three Mothers – Tenebrarum (Darkness), Lachrymarum (Tears), and Suspiriorum – as the basis for his seminal film Suspiria in 1977. Mother Suspiriorum would be first, followed by Tenebrarum in 1980’s Inferno, with Lachrymarum closing his “Three Mothers Trilogy” with The Mother Of Tears in 2007. Suspiria is one of horror’s most celebrated films, featuring exaggerated set dressing, vivid color saturation throughout, a wicked prog-rock score by Italian band Goblin, and reality-warping anamorphic photography.

It’s a more of a horror-mystery, with the film’s notoriety also coming from innovative makeup effects, somewhat hammy acting (in retrospect only – for the time, it was entirely apropos), and shocking murder sequences. The film’s heroine, ballet dancer Suzy Bannion (played in 1977 by Jessica Harper), enters into a prestigious dance conservatory staffed by Mother Suspiriorum’s coven in the Black Forest of Germany; as the unspoiled, she has the power to fight back and rid the world of this evil. Argento’s film lives in its own microcosm, isolated from the rest of the world with no external influence – pop culture, current events – being brought to bear upon its occurrences. 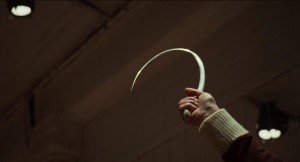 Please forgive this three-paragraph introduction to Argento’s Suspiria, as most of you reading this know exactly how powerful this film is. It is necessary for the unfamiliar to understand how Luca Guadagnino diverges from making his own version of Suspiria a flat-out remake; instead, he makes it an expansion in theme, depth, and feeling. Character names are shared, but that’s about all which carries over to Guadagnino’s palimpsest. Motivations, levels of involvement, and outcomes are radically changed, ultimately making Guadagnino’s film just as strong and captivating as its inspiration.

Screenwriter David Kajganich – whose work includes AMC’s The Terror and the Guadagnino-directed A Bigger Splash – has taken what we love about Argento’s Suspiria and added layer upon layer of subtext and drama, moving it out of the “unseen slasher” arena and into a world with its own politics and rules. It’s a highly complex movie compared to the original, with chess moves being played by the coven throughout its entirety, digging their claws (sometimes literally) into the lives of those circling them. 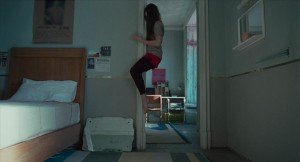 Guadagnino combines the surreality of the original with a 1960s-‘70s throwback feel, avoiding Argento’s color-saturated photography and going instead with a dun-colored, washed-out, war-torn look for his vision of 1977 Berlin. It’s a tired, exasperated look (not in the pejorative sense), like the city has reached and breached its breaking point due to the tensions arising out of the German Autumn and the Baader-Meinhof drama, with protestors taking to the streets and explosions rocking the ground. And it seems the only sanctuary is a building marked in simple lettering: “Tanz,” the German word for “Dance.”

“Dance.” A word which sums this film up as both a verb and a noun. What music are the dancers hearing, and whose steps are they following? Moreover, who’s commanding the dance? Our players circle and circle, with Guadagnino’s mind-altering rhythms preparing us – and the film’s inhabitants – for the final, horrifying truth. There’s nothing to be taken for granted; each furthering layer builds upon the previous as we enter the dance academy alongside Susie Bannion (Dakota Johnson), our guide through the school’s labyrinthine darkness (in both the figurative and literal senses). 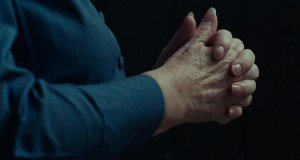 To try to summarize this experience would be an exercise in folly; the more words try to simplify what Guadagnino’s Suspiria represents and portrays, the more difficult it truly becomes to understand. Of course, the simple “An American girl joins a German dance academy run by witches” could start us off, but it is betrayed by stunning late-film revelations; this summary sentence gets quite undone by the end, rendering it moot. Even trying to discuss the film’s themes of power and rebirth becomes a haze-filled task; how do you talk about the various power struggles throughout the film without giving away what the film has to offer?

Suspiria does, indeed, have so much to offer, from the surface to the subterranean levels. Gone are the sunny frames and romance-filled fantasies of Guadagnino’s Call Me By Your Name; he and returning cinematographer Sayombhu Mukdeeprom turn a complete 180° toward the darkened recesses where mind meets body, power meets resistance, and love meets death. Kajganich’s script wends us through several disparate-seeming plots throughout the film, beckoning us to follow each strand as they unhurriedly attach themselves to the final climax, but not before interweaving them in a blood-chilling manner.

The film’s backbone is the dance; as mentioned earlier, everyone in the film is dancing to an unnamed tune, whether they like it or not. When Susie arrives at the academy, it is up to Madame Blanc (Tilda Swinton) to teach her the steps, both as an instructor and as someone who may need what Susie has to offer to the coven. Unlike Argento’s original, no secret is made of Blanc and the other instructors’ involvement with the supernatural and violent inner workings of the academy, which helps open up the story’s themes of fate versus choice. Right away, we see the instructors voting between Blanc and Helena Markos, the winner given leadership over the direction of the coven – and thus, the academy.

Everyone is made to dance, and we see about halfway through what happens to people who step off of their predetermined path to make their own choices in this academy. From the beginning, Guadagnino makes us feel like twirling ballroom guests in a highly-choreographed waltz, while partners are chosen and drawn into the music. We start seeing early on how Susie figures into Blanc’s machinations; soon, other roles are made plain, such as the long-suffering Dr. Josef Klemperer (credited performer: Lutz Ebersdorf), a Holocaust survivor who has never stopped looking for his wife Anke (Jessica Harper), lost in the shuffle during an attempt to escape Nazi Germany. 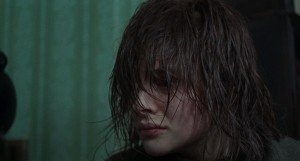 Two characters from the original are given new purpose here, not just to add to the body count – which, for being a horror movie, barely registers. The importance of every last person to the academy mistresses’ plans – from the seemingly-insane runaway Patricia (Chloë Grace Moretz) to the rebellious Olga (Elena Fokina) and the two doddering policemen investigating Patricia’s disappearance – gives Suspiria a fresh feel. Patricia, Olga, and Sara (Mia Goth) are characters revisited and repurposed for this outing, relegated in Argento’s film to provide knife fodder or small plot development. Here, no one is fodder; everyone you meet has their own specific role to play in the coven’s dance, whether as a distraction, a witness, or to be a part of the resurrection of Mother Suspiriorum incarnate. Even those who fall under the various tortures of the coven still have something to give past their worldly flesh.

Radiohead frontman Thom Yorke’s beautiful, haunting score ties these “Six Acts and an Epilogue Set in Divided Berlin” together deftly, blending the powerful with the meek, mirroring Susie and the academy. Yorke’s score becomes its own character with help from Frank Kruse and Markus Stemler’s hypnotic sound design, which includes foreboding breathing sounds to signify Mother Suspiriorum’s presence throughout. Suspiria’s aural realm is just as hypnotizing as its visuals, and when both come at you, especially during one particularly nasty sequence (not just in graphic content, but in tone and feel) in a hall of mirrors, you realize the movie is out for blood and will not rest until it is sated. 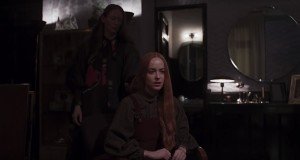 Suspiria is grounded, real-world horror film, a true horror film in every sense of the word, in that lives are irreparably damaged and/or altered at film’s end. Not even they who merely cross the coven’s path are afforded rest, in contrast to your usual horror film. It doesn’t delight in what it has to show you; it just shows you what happens matter-of-factly, not pulling any punches or sparing any feelings. Luca Guadagnino has taken Argento’s vision and projected it past the freaky, psychedelic trappings of the original, moving it into a place where there is no light, there is no savior; there is only unavoidable darkness, and we are dancing to its tune.

Special thanks to Mike Bracken of movies.com.