Call Me By Your Name

Posted by Eddie Pasa on December 14, 2017 in Movie Reviews / No Comments

What drew me in to Call Me By Your Name is the simplicity of its storytelling. It’s a dynamic look at a young man suddenly thrust out of his comfort zone and forced to confront his own budding emotions and sexuality. Thankfully, James Ivory’s script doesn’t make us roll our eyes with forced melodrama and hysterics, leaving us to appreciate this quiet tale of desire. 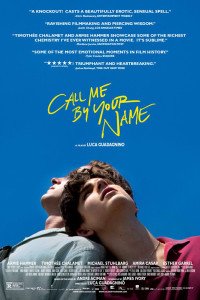 And it is quiet; its original music, performed by Sufjan Stevens, provides a tender backdrop highlighting the explosive emotion bubbling to the surface on-screen. Director Luca Guadagnino takes care to not let anything – camera angles or motions, ostentatious music – impede the journey of our lead character, Elio Perlman (Timothée Chalamet) in any way. Chalamet takes center stage, with nothing ever occurring out of his field of vision.

We’re told the story through his eyes, as his father (Michael Stuhlbarg) brings home his yearly research assistant. Having to give up his room for this “usurper,” as his girlfriend Marzia (Esther Garrel) calls him, sight unseen, Elio’s already not liking the idea too much. When loosey-goosey Oliver (Armie Hammer) shows up and crashes out for several hours – obviously missing dinner and a whole night’s opportunity to get to know the Perlman family – Elio doesn’t know quite what to make of him. 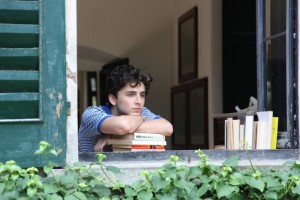 After all, Elio’s got nothing better to do; he spends his days transcribing music and writing self-loathing messages to himself in a diary. He spends time with Marzia, but it’s very perfunctory and not very meaningful, as he often skulks to the side and doesn’t involve himself. But upon Oliver’s arrival, he seems to close himself off even further, hiding a curiosity and an almost childlike attraction to Oliver.

For a kid to whom things come easily, this attraction is the hardest thing he’s had in his life. He can play pieces by Bach on the piano and guitar from memory and speak three different languages; he doesn’t even spend a lot of effort to keep Marzia around. But his initial attempts at gaining Oliver’s notice – and later, his approval – amount to those times in grade school where we try odd tactics to win someone’s heart. And when Oliver gives a hint as to possible reciprocation, the film bursts forth like water behind a leaking dam. 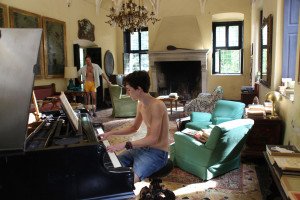 Guadagnino opts for using long takes by cinematographer Sayombhu Mukdeeprom to involve us in their intricate game of footsie (both figuratively and, at one point, literally). Spatial relations often mirror the metaphoric distances between the two, never sure of which one of them is leading their dance. The film’s first half is dominated by a spritely game of attack and parry, with Elio trying childish and naive advances in contrast to confident and measured moves by Oliver.

To be clear, Oliver is not a predator, nor is he deliberately taking advantage of the younger Elio. Instead, Oliver strikes me as being similarly confused with this situation, and he’s trying to handle it the best way possible, keeping his respect for the elder Perlman in mind. Hammer gives Oliver a cool demeanor most of the time; he allows a hope for more with Elio to be glimpsed in small doses, and it’s lovely to see. Guadagnino delights – and makes us delight – in this delicate game by tantalizing us with fumbling moments reminding us of our worst (and best) attempts at trying to make someone love us. 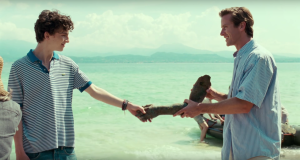 Chalamet’s youthful, charming performance is possessed of an unbent, unbroken spirit still untouched by the ravages of love and life. He’s not innocent, but by no means is he insolent; he’s just a fairly privileged kid stuck in the Italian countryside with his parents, comfortable and safe. But the moment Oliver shows up, Chalamet gives a simply wonderful performance as he switches gears from being cocksure to trying to hide his emotions behind a curtain of aloofness and nonchalance.

Through Chalamet and Hammer, Guadagnino captures the sensual essence of young love and lust in an intimately personal and loving way. You won’t see majestic crane shots establishing the gorgeous Italian scenery; you won’t hear violins swell as Elio and Oliver finally break through to each other. What Call Me By Your Name gives you is the immediacy of desire, and how an emotional awakening leads to the summer of a lifetime.