Full disclosure: I’m positive my parents and sisters made me watch the 1966 “How The Grinch Stole Christmas” special when I was a kid, but I cannot remember it. Having two children of my own, I’ve been planning on reconnecting with it through them, but as yet, I have not. Also, I never bothered to see the Jim Carrey-led adaptation in 2000. Therefore, this review will not focus on comparisons and homages which might appear in this new version, Dr. Seuss’ The Grinch.

Clocking in at 86 minutes – with no post-credits scenes, so you can get your sugar-bombed children out of the theater and straight to the local trampoline park – Dr. Seuss’ The Grinch doesn’t overstay its welcome. But, quite frankly, it doesn’t really make its presence known; we’re in and out of The Grinch’s (Benedict Cumberbatch) story almost as soon as our Narrator (Pharrell Williams) speaks his opening words. The film relies on a lot of sight gags and Grinch scene-chewing, but forms no real connection to the viewer.

At this point while I was writing this, something hit me and made me rethink my opinion of the film.

Let me rephrase: I don’t know if this is what writers Michael LeSieur and Tommy Swerdlow (who played a dude named Bodie in one of my all-time favorites, Real Genius) intended, but Dr. Seuss’ The Grinch doesn’t want to make a connection to the single viewer. It wants to make a connection to the world at large, making a plea for kindness and goodwill. 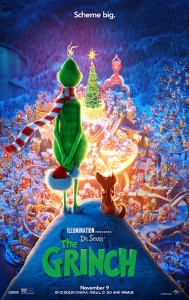 Too much in this day and age, we see the results of being unkind and being nasty to people when we see them as obstacles, not actual people with feelings and stories and lives outside of what we see on the surface. We hide in our caves, vilifying each other from behind computer screens, not bothering to look at the opposite side of things. To people like these, their humanity has gone so far out of the picture to the point that they see those who are hurting as weak and not worthy of being helped. Worse yet is the step taken after that, and that’s where we find ourselves in 2018, with a mass shooting seemingly occurring on a regular basis.

The Grinch is the ultimate troll, crankily judging of the citizens of Whoville for trying to be happy and joyous during the Christmas season, venturing into their town only to get what he needs. He doesn’t see the ebullient Bricklebaum (Kenan Thompson) as a source of friendship and love; he only sees the annoying decorations and overly-exuberant cheer which he avoids to keep his hostile view in line with what he’s believed since childhood. Likewise, Cindy Lou Who (Cameron Seely) runs full-tilt-boogie into him on a mad dash to the post office to mail a letter to Santa Claus. She’s an inconvenience and a nuisance to The Grinch, and he treats her in an adult manner, the barbed and nuanced insults flying right over her head and straight into ours.

But what he doesn’t see is Cindy Lou watching her single mother Donna Lou (Rashida Jones) work a night shift only to come home and hurriedly take care of her three children. Cindy Lou’s letter to Santa isn’t a request for toys; it’s a request for someone to help her mother so she won’t be burning the candle at both ends. Also, Bricklebaum may be a bit much, but his heart is always in the right place, being the embodiment of the Christmas spirit, welcoming all to his front door and not hesitating to lend a hand.

Dr. Seuss’ original story features The Grinch and his plan to take Christmas away from Whoville, believing it to be the only way to stop them and make them as miserable as he is. His only companions in this film – his faithful dog Max and a stray reindeer – are not regarded as friends, but only means to ends, cogs in his machine of woe. Of course, there are reasons for his vehement Christmas hate, but we all know it’ll be overcome by the Whovillians showing him the true meaning of Christmas, and it’s a meaning he can be a part of in his own way.

What’s to appreciate about this version of Dr. Seuss’ story is the amount of good directors Scott Mosier (I honestly didn’t know he was involved until the credits rolled – it gives the early snowball fight a different bent, eh?) and Yarrow Cheney try to put into the world with this film. It’s rather calming and innocuous, harking back to when the term “children’s film” didn’t mean “excessive fart jokes and crass pop soundtrack.” (Yes, there’s a butt joke in the movie, but it’s more couched as a stretching exercise, if I remember correctly.) There’s no need to be offensive; The Grinch does enough of that, going so far as to break into people’s homes to steal their Christmas gifts and decorations.

Instead of ugliness, we see hearts turned and working toward the betterment of others. Yes, it’s a fantasy world originally written by Theodor Geisel where the end is happy, and the villain not only accepts the goodwill he is afforded, he becomes accepting of others and their idiosyncrasies. I’m not saying the world needs to drop everything and become a fantasy, ‘cause where’s the fun in that? But for these 86 minutes, we’re at least given a place where the good are good without reservation, the bad can change, and hearts are warmed by compassion.