Before we get any further, I feel like I have to explain the middling rating given to webseries-turned-feature-film Ktown Cowboys right away, instead of getting to plot points and themes. As a person of Filipino descent, I understand the characters’ struggles for self-definition and cultural identity. The film’s intentions are laudable, being about five Korean-American up-and-comers trying to make their way through life on their own terms while not forgetting to care about those dear to them. At points, the film is laugh-out-loud funny, with the “brief graphic nudity” in the MPAA rating being saved for an uncomfortably hilarious scene. 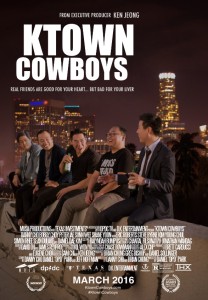 Think of Ktown Cowboys as the Korean-American variation on Jon Favreau’s Swingers, Barry Levinson’s Diner, or even George Lucas’ American Graffiti. All of these films focus on a tight-knit, often vulgar, but well-meaning group of friends, each caught at a personal crossroads. The five Ktown Cowboys – “Ktown” referring to the Koreatown section of Los Angeles – all bring different personalities, strengths, weaknesses, and drama to their circle, with our narrator and lead character Jason (Shane Yoon) telling us at the very beginning that although this film seems like one of those where plot threads get resolved neatly, this film is going to be different. However, it’s not, and that’s kind of where the faults seep in.

“Here’s to new places and old faces,” toasts Peter (Peter Jae) as he raises a glass during the movie; oddly enough, this statement is nigh apt in summing the movie up in one short statement. To be fair, the film’s setting is quite original, as we are taken behind the doors of a culture unfamiliar to most. We are introduced to L.A.’s Korean-American social life, from karaoke joints where hosts and hostesses are paid for their company (it’s non-sexual) to nightclubs that function as a sort-of speed dating milieu, to the after-hours restaurants which serve our heroes after a long night of partying. We’ve seen it before, but it might be the film’s point to show life isn’t all that different between neighborhoods and races. 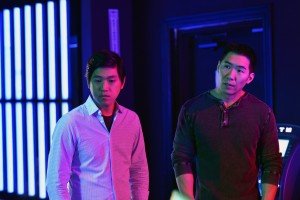 The film likes to play with us, having our characters breaking the fourth wall and directly explaining the various structures of the social scene. It reminds me a lot of Steve Coogan addressing the camera in Michael Winterbottom’s 24 Hour Party People, right down to the color schemes and the somewhat self-deprecating nature of these asides. There’s no doubting its helpfulness at times, especially when it comes down to explaining what’s happening at the aforementioned karaoke establishments or what’s supposed to transpire at a “booking club.” Although this playful technique serves its purpose, there are several instances which seem superfluous or ill-advised, like screenwriter Daniel Cho wanted to drop them in merely to break up the mood, which only winds up slowing the film down and interrupting the narrative flow.

And it’s a good narrative, too, no matter how cookie-cutter the characters may be. We’ve seen a version of the titular Cowboys before, which leads me to the question: in an all-male social group, must there always be the hardheaded nutball who’s always looking for a fight? The parallels between Swingers and Ktown Cowboys are too great to mention, with almost every character being mirrored. Let’s see what we have: there’s the driven Jason, pugilistic Peter, comedian Danny (Cho), levelheaded Sunny (Sunn Wee), and sweet-natured Robby (Bobby Choy). They drink, they fight, they sing, and they try to help each other through their troubles, whether it’s a night in jail or having to make the decision between soulless work and chasing a dream. 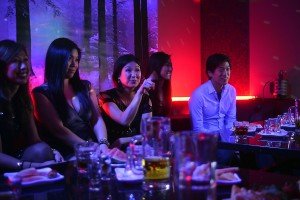 It’s the characters’ internal struggles which tend to be a little alienating. Jason, an executive at a company where the CFO’s just been arrested for fraud, spends way too much time waffling between trying to act like a responsible adult and being a manchild whose dream of co-owning a club with Sunny continually falls by the wayside. Sunny, on the other hand, has to balance working at his family’s liquor store and taking care of his dementia-ridden father. Robby, whose birthday celebration kicks off the film, is saddled with overbearing adoptive parents (Eric Roberts and Rhonda Aldrich) who seem to be more into his heritage than he is, and he’s got a beautiful girlfriend (Camilla Greenberg) whose role in the film seems to be only meant for some kind of comic relief in the beginning. Speaking of comedy, we don’t see enough of Danny, whose one-liners and deadpan presence buoy the film’s spirit.

Peter, however, is the most enigmatic of the bunch. By day, he’s an aspiring fashion designer; by night, he’s swinging punches at everyone he perceives as doing him wrong. A wispy and underdeveloped subplot concerning his relationship with his sister and his deceased father becomes a sudden sticking point, as does his relationship with his mysterious brother David (Daniel Dae Kim). Peter is a goof, a brawler, a stick of dynamite, a loving family member, a hothead, and a surprisingly sentimental and sensitive guy; sometimes, it’s hard to make sense of him, but that’s life, I guess. 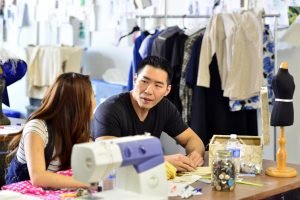 Appearances by fellow Korean-Americans Daniel Dae Kim and Ken Jeong (who also executive-produces) kind of undermine how seriously we’re to take this film. Dropping Jeong into this movie in its early goings makes me think it was more of a move of solidarity, as his cameo does entirely nothing for the narrative, except for showing the audience how much of a dick Peter can be. However, watching Kim as David whipping Peter into shape after a night gone horribly wrong starkly delineates the difference between delivering a line (which most of the cast does in Ktown Cowboys) and acting. Kim’s magnetic performance practically saves the movie, even though he’s onscreen for all of maybe five of the film’s eighty-three minutes.

All these disparate characters seem a little too disparate, as if Cho wanted to hammer home all of their differences repeatedly, allowing no room for these men to breathe. He paints himself into a little bit of a corner by having the aforementioned narration telling us to not expect an easily-resolved film; on the contrary, Ktown Cowboys resolves itself well, even if getting there may not be worth the trouble. One minute, we’re looking at a film where characters cuss too much to sound cool; the next minute, we’re being whisked away to the next plot point without spending enough time to appreciate what may have just happened to one of our Cowboys. Ktown Cowboys alternates between trying way too hard and not trying hard enough, rarely hitting any kind of happy medium and barely rising above its webseries origins.