Posted by Michael Parsons on March 18, 2016 in Movie Reviews / No Comments

I really want to tell you how director Atom Egoyan’s “Remember” ends. I will refrain, of course. But if I could tell you, you would understand why I liked the movie so much. So I’ll just say that Christopher Plummer gives another riveting performance and get on with the synopsis.

Zev Guttman (Plummer) is a 90-year-old Auschwitz survivor with a failing memory who resides in an assisted living community. After the death of Zev’s dear wife, his wheelchair-bound friend Max Rosenbaum (Martin Landau),  a fellow survivor, approaches him with an envelope that outlines a revenge pact that Zev has agreed to carry out upon her passing.

Both of their families were murdered by Nazi block guards, like countless others, and Max has managed to figure out that one of the perpetrators is alive and well in North America under the false name Rudy Kurlander. 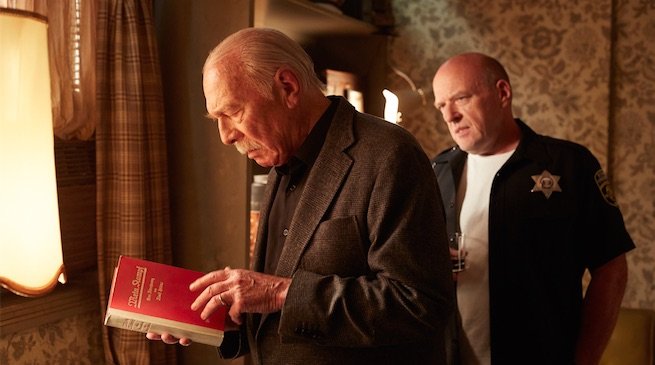 Given the whereabouts of the only four Rudy Kurlanders residing in the U.S. and Canada, Zev ventures out to kill the one responsible for the slaughter of their loved ones. With a Glock pistol in his hand bag, the letter as his guide, and seemingly little to lose, Zev dutifully follows Max’s instructions and heads off to Cleveland, unbeknownst to his caregivers and son (Henry Czerny). Once there, he confronts an ex-Nazi who digs up evidence that he was serving in North Africa during the mass killings at Auschwitz, so surely he couldn’t be the guy.

Zev ends up in Canada, where he finds that his next prospect, a frail, bed ridden man, is actually a concentration camp victim. He recoils at the sight of Zev’s gun, exposing the prisoner number imprinted on his forearm, and Zev tearfully embraces him, as if all the memories have suddenly come rushing back.

Still, Zev finds himself in the occasional fugue state, unsure of where he is and calling for his wife as if she were still alive. In Idaho, he meets a giddy, whisky swilling, antisemitic cop (Dean Norris) who proudly exhibits his late father’s Nazi memorabilia, unaware that his guest is Jewish. Zev peruses an original edition of Mein Kampf with a look of horror, wondering if its deceased owner was the man he’s been looking for.

That’s as far as I’ll elaborate, but Benjamin August’s script is brilliant, and the film delivers far more than one might anticipate. Mychael Danna’s  score is unimposing but evokes apprehension and melancholy. “Remember” is an onion-peel thriller in the vein of “Memento”, a sneaky, understated mystery rooted in an atrocious piece of history. What better topic to fuel a revenge story; somewhere along the way, the movie develops a “Harry Brown” quality, the everyman dispensing justice. Short, evenly paced, and of course full of twists, this is the type of flick that Hitchcock fans should put on their must-see list.