Usually, the best movies rely on subtext and nuance, leaving things for you to rediscover upon rewatching them. Other films make their statements like a boxer’s jab to the chest before stepping back and waiting to make their next move. The down-and-dirty Cooties is one of the latter films, being passable and enjoyable enough, but not enough of an attraction to warrant revisits or recommendation. 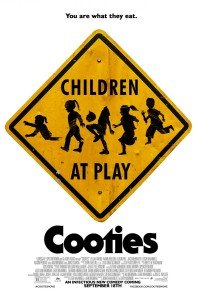 The premise is simple: a small town school is ground zero for an infection which spawns flesh-eating zombies, and the survivors are trapped in the building. Easy enough, right? However, screenwriters Ian Brennan and Leigh Whannell (who also appears in the movie) try way too hard to turn everything on its head and make an unconventional horror film while still trying to be subversive and satirical. It appears they have something to say about everything affecting today’s society, and it often comes off more like bitching than true satire.

First off, the only people this infection seems to affect are children. Instantly, we’re hit over the head with examples of loutish behavior before the infection takes hold. Kids here have no problem mouthing off to their parents or elders using all manner of curse words, nor do they have trouble generally being genuine terrors. A kid named Patriot (Cooper Roth), so named because he was born on 9/11, threatens to have substitute teacher Clint (Elijah Wood) arrested for molestation after Clint, following school policy, tries to take Patriot’s phone. 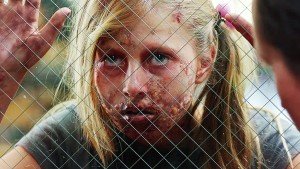 So, yay, the kids are dicks. They don’t respect authority and the dynamic between child and parent or teacher. This is pretty much the entire movie’s raison d’etre; we have gone so far to protect the children from anything to the point where they’re the ones who are in charge, not the other way around. It’s a metaphor we’re hit with over and over and over again, and it doesn’t stop there. It extends to the adults, too; the difference between dreams and reality take form in both Clint and his opposite, P.E. teacher Wade (Rainn Wilson). It’s kind of implied they were told they could be whatever they want to be, but life just got in the way of their respective dreams of being a writer and an athlete.

Next up: the food industry. The opening credits are underlaid with a sequence showing us how chickens go from being alive to battered nuggets; as you can probably surmise, it’s exaggerated into not being a pretty sight. Adding to our general disgust is an obviously rancid chicken, complete with nasty coloring where there shouldn’t be, getting tossed into the batch and processed along with the other meat. Guess what the cause of the zombie infection is? Yup. Chicken Zero. But hey – the town isn’t called Fort Chicken for no good reason. 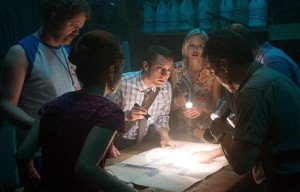 I could go on and point out every little thing being sent up or complained about – the overmedication of our children, the underpayment of teachers, not letting kids play hard contact sports, and don’t forget bullying – but it’d be just as bad as watching Cooties with your brain turned on. Taken at face value, it’s a fairly entertaining film with some laughs to be had. Performances, as you’d expect in a film like this, are as camp as they need to be, each person playing to his or her own exaggeration with the appropriate amount of gusto or withdrawn awkwardness. The exception here is Alison Pill who plays Lucy, a fellow teacher and a former crush of Clint’s; Pill puts on a good show, throwing herself into the movie and making her role shine in a field of ho-hum peers.

Cooties is a wasted opportunity of a film made entirely of social commentary. It’s like a stand-up comedian who’s doing a routine but forgot to be funny; it doesn’t drop its finger-wagging and tongue-clucking long enough to be truly satirical. Well, maybe long enough to make a too-obvious reference to Elijah Wood in The Lord of the Rings, but even that’s not enough to distract you from feeling like you’re suffering in school right alongside the people on screen.