Time Out Of Mind

Director Oren Moverman has a singular style – dry and unfettered, he gives you what the camera sees, and nothing more. The two films I’ve seen of his, Ramparts and Time Out of Mind, carry with them an almost cinéma vérité feel, almost playing by the 10 rules of the Dogme 95 movement. The newest of those two films, Time Out of Mind, turns his stylistic gaze on the homeless and indigent, putting you in the shoes of a man named George (Richard Gere) as he shuffles around New York City being one of those invisible people on a street corner or a park bench. 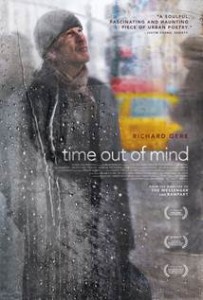 We here in DC know how the homeless are treated, and I’m pretty sure it’s the same everywhere else: with pity, disdain, fear, or straight-up indifference, never knowing or caring about where these people were from or what they were doing in their past life before they lost everything. Time Out of Mind introduces us to George in this way, and leaves us hanging on the greater mystery of who he is and what he did in his old life. He constantly refers to a non-existent wife, and he stalks – well, “stalks” may be too harsh a term for what he does, but it’s close – his daughter Maggie (Jena Malone) as she moves about her daily life as a musician and a bartender.

Moverman chooses to keep everything at George’s eye-level and within his range of view – nothing happens outside of his world and eyesight. We may see wide or overhead shots of George, all of which help tell the story about what he’s seeing and experiencing, maybe even generating some small bit of suspense as to what he’s doing outside a bar around a corner while his unknown-to-us-at-the-moment daughter walks to her job. Or it’s to note how close he is to a fight breaking out unexpectedly in his shelter line and his apathy toward it. 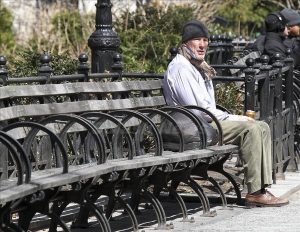 Time Out of Mind is inherently silent for a lot of the picture, as George’s existence is oftentimes solitary, with various interlopers – friendly nurse Maire (Geraldine Hughes), overly garrulous shelter acquaintance Dixon (Ben Vereen), or an apartment manager (Steve Buscemi) who kicks George out of his squat in the first scene – providing some kind of wall for George to bounce off of and give us further exposition. Even with these characters coming into George’s life for their transient appearances, Moverman focuses solely on George, as he sells clothes for beer and attempts to come to grips with his reality as a homeless person. Richard Gere puts forth a chillingly muted performance, his voice never climbing above a conversational tone; it’s as if he means to blend into the background, the way we see most homeless people these days.

This film’s intentions are terrific – to make you feel the isolation and the dangers of living on the streets – yet it comes at a cost. All too often, we’re given long expanses where nothing of importance or plot-driving happens, resulting in tedium and repetitiveness. Moverman lets his camera go, capturing everything going on around George, no matter how banal or inconsequential to him it may be. At one point, I found myself wondering if this movie wasn’t so much about George, but more about life around him and the systems in place which all at once try to keep him down and to raise him up. 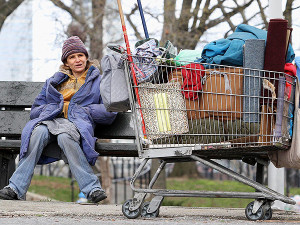 However, I consider the film’s tedium to be as much of a character in the movie as George himself, because it’s not like we’re watching an action movie or a drama movie where two lead characters have to combine chemistry in order to make sparks happen. We’re in the middle of someone’s life who doesn’t have access to the jobs, luxuries, services, or goods normal people have. George doesn’t have a job, so what are we supposed to watch him do? Run around town trying to find the Holy Grail, like Robin Williams’ Parry in The Fisher King? Different movie, different purpose. Moverman’s purpose in this matter-of-fact, grounded documentary-like drama is to show you two hours of a life so different from our own, with all its loneliness, its danger, and its solitude. Although slow-moving at times, this is what life is like when there’s nothing to do, and Time Out of Mind shows it well.