If Shakespeare said “What a piece of work is man,” then what a wondrous work of art is Inside Out. It may not be a valid scientific explanation for why the human mind thinks the way it does, and it may be an oversimplification for the depths of the human brain, but it sure does go a long way toward making us think about our emotions and how they guide our decisions. What’s great is that we may be expecting a children’s movie that’ll keep them entertained for two hours, but we wind up witnessing one of the most humanistic films ever created, a true celebration of imagination and whimsy that makes Inside Out the best Pixar film to date. 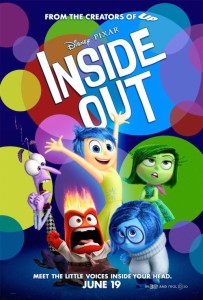 A strong statement, to be sure, considering the impact of some of the previous Pixar films, which certainly includes the universal appeal of Toy Story and its sequels, the artfulness of The Incredibles, and the extremely touching Up. All of these films represent a specific part of our growth as humans, regardless if the characters are cars, fuzzy monsters, bugs, or fish; however, Inside Out doesn’t just “represent” the growth, it tackles it head-on, making it the first Pixar film to focus solely on humans and the machine that is the human brain.

Granted, the main characters are anthropomorphic blobs of whatever – some more humanoid, some more blobby – that represent our emotions, both by action and by color: there’s the yellow, effervescent Joy (Amy Poehler); Joy’s polar opposite, the blue Sadness (Phyllis Smith); the hilariously terrified purple Fear (Bill Hader); the always-sassy green Disgust (Mindy Kaling); and finally, the red, blow-his-top-off-in-flames madman, Anger (Lewis Black). These five emotions dwell in the brain of an 11-year-old small-town Minnesota native, Riley (Kaitlyn Dias), a hard-charging, hockey-playing girl who’s happy being who she is and happy being with her father (Kyle MacLachlan) and mother (Diane Lane). 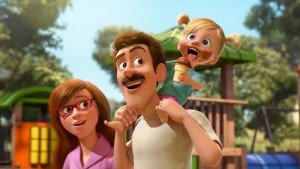 The film’s beginning takes us back through the wonder of early childhood, the aforementioned emotions developing while watching Riley go from a baby to a naked toddler running around and shaking her butt after a bath [this bears mentioning ‘cause my 5-year-old did (and sometimes still does) the same thing – is this a universal phenomenon?], to an adolescent playing with her imaginary friend Bing-Bong (Richard Kind), finally coming to the age where we start our story proper. She’s a great player on a hockey team, and she’s got some great friends in a place she calls home. Now, we all know what kind of changes were happening to us around the 11-year-old stage, and unfortunately, a big external upheaval is going to accompany all of that: her father has just accepted a job in San Francisco and is bringing the family along.

Let’s recap: an 11-year-old, on-the-edge-of-biological-maturation girl is about to lose her whole world – her friends, her hobbies, her hangouts, her school – and she’s going to be going to a big city where she winds up being just another face in the school halls. This is where Inside Out’s story kicks into high gear – Riley’s emotions start to become unbalanced, with Joy taking a backseat to Sadness and Disgust, with a huge dose of flaming Anger waiting in the wings. No matter how much Riley tries to make the best of her situation, Sadness seems to be taking over quite a lot, and Joy can’t have that, can she? 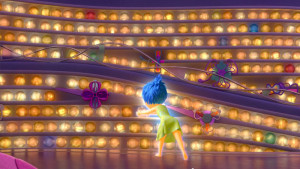 As Riley makes new memories, this is where the imagination of Pixar magic shines, as these memories are represented by spheres that are colored by whichever of the five emotions created them. Core memories, the ones that Riley holds onto that help make up who she is, are carefully stored in a special place to be left untainted – if another emotion touches them, they will be changed to that emotion’s color forever. The term “coloring one’s memory” is taken well out of the figurative and straight into the literal, as formerly yellow spheres turn blue at Sadness’ touch. When the Core memories are endangered and lost in the vast wasteland of Riley’s mind (the structure of which is better seen than described), Joy and Sadness try to retrieve them, leaving Fear, Disgust, and Anger in charge, which starts a chain reaction of bad things getting worse…

The struggle to keep our emotions in check is one we endure on a daily basis, and never has it been more perfectly personified than in Inside Out. We see how each emotion can twitch and activate at the drop of a hat, and how each should rely on the other for balance, but they rarely do that, do they? The film’s imaginative screenplay, by veteran Pixar director and co-writer Pete Docter and co-writers Meg LeFauve and Josh Cooley, takes us into the wild and dark land that is our mind, mining comedy and truth from all corners of its structure, like what happens when we let memories fall by the wayside, or what happens when that annoying song keeps coming back to the forefront of our minds out of nowhere. 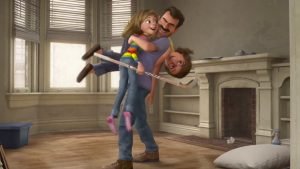 It also emphasizes how universal these emotions are, and how normal it is to be any given one at any given moment. There are scenes that let us know these aren’t just characters in Riley’s head, but in everyone’s. Being the first Disney/Pixar film to truly take on this precarious stage of human development, Inside Out dares to not just explain it away with a wink and a laugh, but with the solemnity and depth that this truly deserves. Amy Poehler, comedian and “Saturday Night Live” alumna, plays Joy with a respect and wisdom that never goes into silliness or self-parody; countering her is Phyllis Smith as Sadness, whose characterization is a meek, yet beautiful downer. Both of them, as with the rest of the voice cast, are perfect in their roles, each being the exact personification that each character needed. I mean, who else but Lewis Black could be Anger?

The script, the voice cast, and the animation all combine to make, as I have said before, the best Pixar film to date; I honestly can’t recall one of their films that is so outstanding in its emotional and intelligent depth, nor can I think of any of their films where I didn’t focus more on the voice actor than the character. Inside Out achieves a wonderful balance between all of its elements and connects on every level by engaging us as humans, sharing what makes us the same, and trying to make sense out of the mundane by being extraordinary. Don’t miss it.