Here we go again, ladies and gentlemen; the lovable Thunder Buddies, John Bennett (Mark Wahlberg) and his miraculously talking teddy bear Ted (voiced by Seth MacFarlane), are back to gross us out and make us laugh in Ted 2, the sequel to 2012’s surprise box-office hit. Directed and co-written by MacFarlane, Ted 2 is everything a sequel should be, in that it’s not merely a technical improvement over its predecessor, but an emotional improvement as well. We find MacFarlane taking all the things that were great about the original Ted, along with the “hit” portion of the hit-or-miss A Million Ways to Die in the West, combining the two for a more-hit-than-miss film that winds up being better than the first. 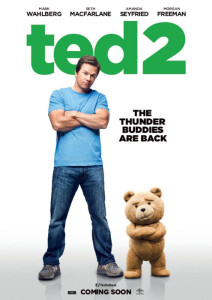 Of course, it’s Seth MacFarlane, so there will be jokes that go over like lead balloons; there will also be some very un-PC language used that more define the characters’ upbringing and social class more than deliberately offend. As per the first film, there’s a ton of profanity, constant toilet humor, and more bodily excretions than you may want to see. However offensive it may be, MacFarlane does earn his laughs through his usual brand of mischief and social commentary, along with his knack for including musical numbers that will delight his regular viewers and confuse anyone who’s unfamiliar with Busby Berkeley showstoppers.

Immediately, we notice that MacFarlane’s going for bigger and better, as he opts for a full 2.35:1 widescreen picture, choosing to fill the frame in the film’s opening moments with a top hat and dinner gown dance sequence straight out of the 1930s, with the dancers kicking and pirouetting with Rockette-like precision. To me, this feels more like the beginning of Indiana Jones and the Temple of Doom, where we’re taken from a small club to a vast stage that couldn’t possibly fit in the previous space; while this may seem weird at first, it’s best remembered as the type of homage that MacFarlane has done for ages, but he’s got a bigger budget now. 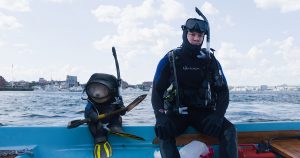 Wahlberg is at his usual comedic, farcical best as Boston townie John, recently divorced from Lori (Mila Kunis, not appearing in this film) because she spent the marriage trying to change him into something he could never be. John has since chosen to remain the stoner man-boy; how else could a movie like this generate its laughs without male characters in a state of arrested development? Nothing is seen of John’s life outside of his hangouts with Ted, so it’s suggested that he’s the same person we saw in the opening reels of the original film, with all of his growth cast aside for humor’s sake.

Ted’s just gotten hitched to his brash, gum-cracking, grocery store co-worker Tami-Lynn (Jessica Barth, also reprising her role from the first film), which sends John further into his depression, the side effects of which Ted hilariously, yet disastrously discovers on John’s laptop, which kicks off one of the film’s running jokes about how Google keeps suggesting something you’re NOT looking for on the search engine. This gag and several others throughout the film (like Instagram and hashtagging) are easy to spot when they’re coming; the mileage may vary on how well each pays off, and it must be said that there’s only so many times one of these gags can be used before it loses its charm.

One year into the marriage, Ted and Tami-Lynn are looking like every filmic stereotype of a couple locked in a death spiral. Ted’s drinking beer and smoking a cigar in a wifebeater while sorting out bills and yelling at Tami-Lynn for spending all sorts of money they don’t have. Tami-Lynn’s throwing hot pans at Ted and blaming him for everything wrong in their lives, and neither can nor wants to back down. The “abusive couple in an apartment” is an easy target, yet with the thick Boston accent and the stereotypical domestic disturbance happening between a woman and a teddy bear, it’s hilariously cartoonish.

Taking advice from a dubious co-worker, Ted vows to have a baby with Tami-Lynn in order to save the marriage, only to have the process bring Ted’s legal status into sharp relief: the state of Massachusetts does not recognize him as a person, but rather property, “like garbage, or a piece of sh*t,” as it’s so elegantly put multiple times throughout the film. Hiring pro-bono civil rights attorney Samantha Leslie Jackson (Amanda Seyfried), who smokes copious amounts of marijuana (due to migraines – yeah, right), Ted and John go to court to prove Ted’s personhood, which starts the movie drawing some seriously uncomfortable parallels between the plight of slaves and homosexuals.

The heart of Ted 2 is found in Ted’s struggle for recognition as a person, yet Samantha chooses to word it wrongly and paint him as human. We all know Ted isn’t human, nor will he ever be; he doesn’t have human organs or even so much as an ounce of sperm to give to Tami-Lynn to have a child. Yet, he is a sentient being, and I wonder why Samantha didn’t choose to argue that. Was it so that the ending courtroom scene would be more resonant?

Sometimes, Ted 2 tries too hard to be topical and prescient, almost hitting the nails too hard on the head, using current issues like Ferguson and Bill Cosby to earn some kind of awkward laughter. However, where Ted 2 is at its best is seeing the camaraderie between Ted, John, and Samantha – and thankfully, we spend a lot of time with these three for the movie to work its magic on us. I do have to wonder, though, about how Amanda Seyfried has put up with being in two movies written and directed by MacFarlane where her screen opposites make fun of her eyes (Charlize Theron did this in A Million Ways to Die in the West). To balance that, I guess, she’s given one of the film’s best moments in an homage to John Landis’ ¡Three Amigos! from 1986; it’s a song so beautiful and well-performed, I wouldn’t be surprised to see it wind up in the running for Best Original Song at next year’s Academy Awards. 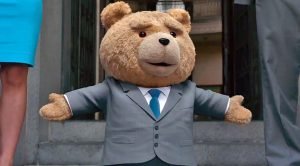 MacFarlane often chooses easy targets for his comedy, and the laughs range from sidesplitting to a little nervous, as if we’re laughing at his temerity to have written audaciously racist, sexist, ageist, homophobic (which says more about John and Ted than being truly homophobic), and ignorant jokes. However, more often than not, we do find ourselves laughing along with the movie as it bares some frightening truths about our everyday lives. The script pulls no punches as we see issues of infertility, sperm donation, being caught at the wrong time on camera, and identity taken head-on in the usual MacFarlane style, which is to say that it happily crosses the line numerous times while waving the middle finger at you. I, for one, appreciate that someone’s still daring to be offensive while balancing it out with a large dose of humanism. He doesn’t so much acknowledge our failings as human beings as he does exaggerate them beyond the tasteful, and that’s a lot of where his comedy lies.

Another part of his comedy rests with the various cameos in his films and television shows. Fans of all of the post-original Star Trek iterations should wonder if he’s pillaged the casts wholesale, and there are even two appearances by actors in garb you may have never expected to see them in again. One of these cameos results in a wordless post-credits payoff, so stick around for that (you’ll also hear the Norah Jones version of Seyfried’s song). Amidst the cameos, the raunchiness, the offensive language and stereotypes, and the return of Donny (Giovanni Ribisi) as a scheming janitor, Ted 2 still revels in being about two inseparable friends willing to go the extra mile for each other. Their story is more tightly focused on them this time around, making for a more coherent and funny film that outshines the original film by leaps and bounds.