With those words ringing out amidst a blast of bongos, Bao Nguyen takes us on a Steadicam glide through a space many of us have seen, but few of us have really traversed: Studio 8H at 30 Rockefeller Center, home of one of America’s most venerated comedic institutions, “Saturday Night Live.” What was originally called “NBC’s Saturday Night” (hence, the opening tagline, “Live, from New York, it’s ‘Saturday Night’!”) celebrated its hard-earned 40th anniversary earlier this year with a 210-minute televised special, where cast members from every year of its production came out to reprise their famous characters, with bloopers and screen test footage being played interstitially between sketches. 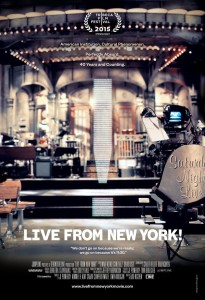 Contrasting this loud and brash party is Nguyen’s pensive, low-key 90-minute documentary, Live From New York!, featuring the darker side of the party – gender and race issues, the egos, the studio politics that have hampered (and still do, to this day) the writers and the actors, and other things we as a viewing audience didn’t see in between the sketches and the musical performances. Featuring interviews from the creator of “Saturday Night Live” himself, Lorne Michaels, and various luminaries who got their start on the show, Live From New York! serves as both an eye-opening tell-all and a finessed look inside the history and workings of this show that’s still making America laugh every Saturday night.

“Saturday Night Live” has not just been a staple of American late-night comedy for the past 40 years, it’s also been a touchstone people look to in order to gain a comedic perspective, often saying “What’s ‘Saturday Night Live’ going to do?” to target current events. From 1975 to the present, we’ve seen the best and the worst that humanity has to offer, and “Saturday Night Live” has been there to pick up the pieces and run screaming hysterically through the streets, mining comedy from the darkest places of the 24-hour news cycle. Come Monday mornings, the watercooler talk is almost always about what Justin Timberlake or The Lonely Island did in the latest SNL Digital Short, or how someone on “Saturday Night Live” had the guts to take the mickey out of some serious social situation. 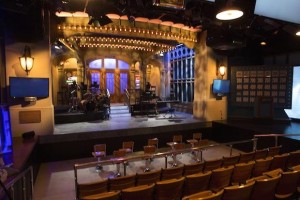 Live From New York! reveals all of this from the perspective of the castmembers and production staff, whose insights and candor reveal so much love for the show, even if the experience may not have been the best for them. One of the more electrifying segments of the documentary features Garrett Morris, the sole African-American male in the show’s first cast, as he speaks about the tokenism and lack of good characters compared to those written for the other actors. Throughout this segment, we see “Saturday Night Live” address the racial divide, yet the show still has a long way to go toward equality, as bits of sketches from then to now are shown that comically acknowledge the lack of diversity in the cast and the writer’s room.

It’s not exactly a whitewash or a gladhanding, as Live From New York! seeps a little beneath the tensions that exist just out of the camera’s eye, sometimes rehashing stories we’ve heard from behind-the-scenes specials in years past, keeping a lighter tone than expected. However, amid all the positive sentiments proffered by Lorne Michaels and the cast, there’s often an undercurrent of what I can only define as a certain type of unease running throughout the film, as if people were afraid to say too much about everything. I find myself thinking about what Billie Joe Armstrong from Green Day says of two of his songs from their concept album “American Idiot”: “If ‘Holiday’ is the party, ‘Boulevard of Broken Dreams’ is the hangover.” If the 40th anniversary extravaganza was the main event, Live From New York! does a masterful job of cleaning up and showing you the other side of the laughter.