Posted by Eddie Pasa on March 4, 2015 in Movie Reviews / No Comments

Meet Milan Mumin, a Serbian immigrant to the United States. Formerly lead singer of a band called Love Hunters, now he spends his time driving a cab while writing songs for his new solo project. In the film Love Hunter, we first see him recognized by a fellow immigrant on the street, seemingly at random – he’s amazed to see Mumin driving a cab instead of being a revered frontman of one of Serbia’s biggest bands. 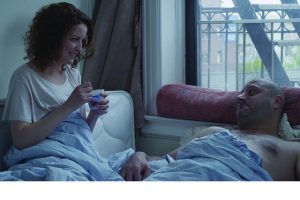 In this short two-minute introduction to Mumin, we can see what Love Hunter is really trying to get at: making it big in America, yet having to grind it out in jobs that have no relation to the dream you’re chasing. Mumin’s struggle is universally appealing, and that’s what lends Love Hunter its charm. He’s an average-looking guy with a distinct singing voice (admittedly, it takes a bit to get used to it), but nothing’s going to get in the way of him realizing his dream. Not his job as a cabbie, not the lack of a bass player (we’ll get to that in a bit), and not his girlfriend Lela (Jelena Stupljanin), who wants him to move back home with her when she’s done visiting.

Writers/directors Nemanje and Brane Bala keep the pace lively and moving quickly in this semi-documentary, incorporating real-life information and occurrences from Mumin’s experiences. Love Hunter follows Mumin as he gets closer and closer to his two-day stint in a recording studio – he’s written songs and has had extensive rehearsals, but with his bass player quitting right before the recording session is supposed to start, he’s in a bind. As luck would have it, a chance night on his friend’s couch leads him to Kim (Eleanor Hutchins), a bass player who’s got the heavy sound he wants. 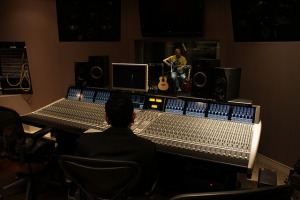 Throughout the movie, Mumin tries to keep one step ahead of everyone while trying to make as much money as he can in order to not only afford the studio rate (which has already been discounted), but to afford Kim as well, because she’s demanding payment for time lost at work and to help her child get braces. As Mumin and Kim interact, rehearse, and write songs, a friendship with a hint of something more is enkindled, leaving him at a crossroads with what to do about Lela.

Yeah – sounds like every rocker’s fantasy, eh? Love Hunter stays right with Mumin as he moves between his job and his musical life, examining the things and people he’d rather focus on more than others, and that’s where we really see why the film’s titled Love Hunter; believe me, it’s not just a reference to his former band. For me, it’s like he’s getting a taste of everything going right the way it did back home, and now he’s almost believing he’s back at the top without actually having gotten there. And from that point forward, Love Hunter becomes a bit of a “Dude, don’t do that!” kind of movie; it’s not necessarily a train wreck like This Is Spinal Tap, but it’s not exactly smooth sailing, either.

What makes Love Hunter so engaging is Mumin’s eagerness and his open heart: the former keeps us enthralled in his quest, and the latter tends to get him in a bit of trouble sometimes. He’s a performer through and through, aiming to please everyone and sometimes losing focus on the long game, but it’s fun to watch him play his music and flash back to when he was singing in front of stadium crowds in Serbia. His two interests – Jelena Stupljana as girlfriend Lela and Eleanor Hutchins as bassist Kim – are as opposite as can be, one opting for a safe life and comfort, while the other is more of a fly-by-the-seat-of-her-pants kind of girl. They both bounce off of Mumin in their own different ways, and it’s interesting to see the larger meaning behind both of them – Lela represents tradition, while Kim represents the American dream – with only Mumin deciding which is best for him.