Posted by Eddie Pasa on March 6, 2015 in Movie Reviews / No Comments

The term “rode hard and put away wet” originates from horseback riding days, when a horse was put back in a stable after a long day’s work without a sufficient cool-down period. These days, it seems to be used as a metaphor for someone who looks sick or tired. Adam Carolla’s play on this term in his new film Road Hard summarizes his character Bruce Madsen’s road-weariness of being a former television star being forced to go back on the stand-up circuits to pay his bills. However, a little bit of the geek in me wishes that it was a play on the title Die Hard, where one man is forced to battle insurmountable odds in order to save himself and get the girl. I mean, it’s not that much of a stretch is it? Especially since the lead character’s name is Bruce… 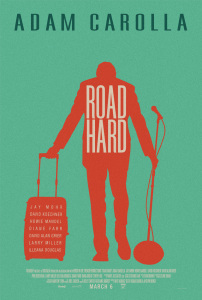 That’s basically what Road Hard runs down to: it’s one man against the world with seemingly no one having his back. Carolla mostly plays his smarmy self that we’ve seen over the years, with very few unguarded moments as he travels from state to state, facing dwindling crowds (not to mention dwindling paychecks) and and tiresome impersonal encounters. With little help from his manager Baby Doll (Larry Miller), who seems to spend more time by his pool with half-naked starlets than actually getting Bruce booked, Bruce doggedly carves out a coast-to-coast, soul-crushing path from one comedy club to the other, earning what he can to put his daughter Tina (Cynthy Wu) through college.

A lot of what I know about the comedy circuit I learned from Christopher Titus, and many of the perils of life on the road that he talks about are shown in Road Hard: the cruddy hotels, the “chuckle-sluts,” the demanding ex-wife (which is a large reason of why Bruce is on the road), the hecklers, the guy who won’t laugh… the list goes on. Co-writers/directors Carolla and Kevin Hench give us a solid example of what life is like for a comedian who’s fallen from the spotlight, grinding it out for a purpose that isn’t even his. Regardless, they keep the laughs coming at a quick clip, even if it feels more beat-by-beat than organic. 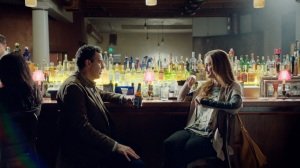 It’s a slickly-handled state of affairs, with Carolla anchoring the proceedings all the way. While much of his performance seems to be derived from the same persona that we saw in “The Man Show” or heard on his radio show “Loveline” (these shows are also alluded to in the movie, defining Road Hard as more of a semi-autobiography than a comedy-drama), Carolla shows genuine moments where we’re finally looking at the man, not the myth. This is helped by the appearance of Sarah (Diane Farr), a woman who drifts in and out of his life after accompanying her friend to one of his shows. She becomes the facilitator for the audience seeing what they’ve wanted to see all along: Bruce-representing-Carolla naked. And I’m not talking about nudity; I’m talking about Carolla dropping his snarky public persona for five minutes and letting us see a more personal side of himself.

Much like life on the road, characters move in and out of Bruce’s sphere of consciousness with seemingly no effect, seen once and never seen again. Road Hard is packed full of familiar comedic actors, from Illeana Douglas and David Koechner (respectively playing Bruce’s ex-wife and her new husband), David Alan Grier and Philip Rosenthal (Bruce’s comedian breakfast buddies who actively try not to rub their success in his face), and Jay Mohr, as Bruce’s former hosting partner Jack Taylor, now a hit on late-night television. Full of cameos like these, Road Hard can be a little too annoyingly slick and impersonal at times, but that’s the point it’s trying to make: you have to have armor and keep people at arm’s length if you want to survive in this business. However, Road Hard is at its best when it pulls back the curtain and allows us a glimpse into the offstage world we never see, and it’s definitely got laughs for days.

At the West End Cinema for one week starting today. Also available On-Demand and as a digital package at http://www.roadhardmovie.com/.