Posted by Michael Parsons on February 27, 2015 in Movie Reviews / No Comments

In “Focus”, Will Smith plays a con man who falls for his apprentice, a gifted pickpocket played by stunning “Wolf of Wall Street” star Margot Robbie. Kind of like 2009’s corporate espionage flick “Duplicity”, the lead characters play hard to get with each other while engaging in what I assume is meant to be a sexy, enticing fantasy of intrigue and deception. Only here, the “sexy” is dull, the fantasy is often preposterous, and the intrigue is compromised by clichés like “There’s no room for heart in this game. It’ll get you killed”.

Smith’s character Nicky, a guy who’s been in the game a “long, long time”, looks like he’s ready for retirement. It’s mainly because the actor, a versatile talent, appears tired, or perhaps just disinterested in the material, which would seem impossible in the presence of his radiant co-star, who virtually lights up the screen. Enter Robbie’s bubbly newbie Jess, who makes a mark out of the veteran hustler at a hotel bar, and promptly gets him up to 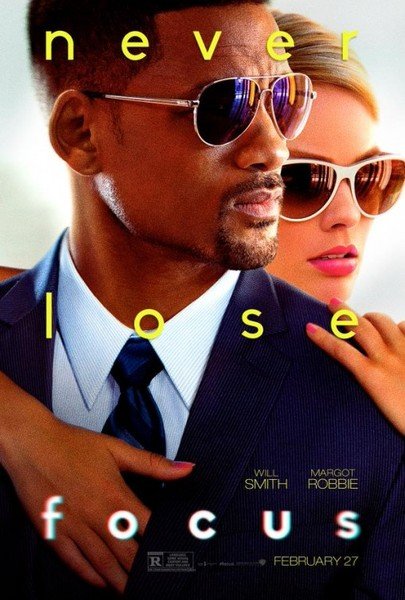 her room, where, in a familiar scenario, he sees right through her seduction for the swindle it really is, but goes through the motions anyway because “he likes boobs”.

Yeah, it’s a comedy — at least it wants to be a comedy, and for that, they at least have the right man in Smith, who can elicit an occasional laugh even from the most drab of scripts. But filmmakers Glenn Ficarra and John Requa, who also wrote and directed 2009’s serviceable rom-com “Crazy, Stupid, Love”, seem a bit out of their element in the crime genre. Things are awkwardly paced, as Nicky takes young Jess under his wing and  grooms her for the big leagues, where he deploys a team of expert thieves in New Orleans to relieve unsuspecting tourists of their valuables. This is a volume business, he explains. There’s no “big score”. Montage, montage, montage, and cheers, we’ve just made $1.2 million.

As the film delves into the details of our protagonist’s elaborate plans, “Focus” plays like Scorsese-lite, right down the requisite “Sympathy for the Devil” inclusion (though the song actually serves a purpose, no matter how off-the-charts ludicrous it is), in a scene where Nicky succumbs to his gambling addiction at the Super Bowl with an eccentric billionaire (BD Wong).

Meanwhile, the budding romance is more implied than depicted, in what mostly looks like a really expensive cologne ad. Presumably because he’s afraid of feeling (as men often are in these movies), Nicky parts ways with a heartbroken Jess; the film jumps ahead three years to Buenos Aires, where Nicky, looking more fatigued than ever, has been hired by race car mogul Garriga (Rodrigo Santoro) to drop false intel on one of his competitors. Of course, posing as a drunken, disgruntled ex-employee of Garriga’s should be enough to get Nicky deep within the inner sanctum of the enemy, who will then spend millions based on their implicit trust in him.

This is all well and good for a disposable grifter flick, I suppose (and not even close to the most far-fetched part of the film — wait’ll you get a load of Nicky’s grand last-ditch maneuver), but when Nicky loses his cool after Jess shows up on Garriga’s arm, “Focus” starts to fall apart like a roll of wet toilet paper. I’ve always been a fan of Smith, and Robbie is one of my favorite up-and-coming stars — she certainly breathes life into the proceedings where she can — but the characters, though impossibly attractive, aren’t given enough time to develop before the flick’s abrupt shift in direction. It then tries so hard to throw us off the scent of its big multi-twist climax that the love story, which was stunted to begin with, is never very believable. Not terrible for a matinee or a diversion on cable, but the most fun I had during “Focus” was watching Gerald McRaney (“House of Cards”), who steals his handful of scenes as Garriga’s cranky, metaphor-slinging enforcer.