To write about Predestination is, in essence, to spoil it. For a film like this, which deals with time travel and intricate plotlines, is it best to discuss the film’s plot, themes, or aesthetics? I’ve tried to start this review in so many different places, but none of them seem right. Maybe it’s my mind mirroring Predestination’s time labyrinth, where no one knows where it begins or ends. All I know is that Predestination is a well-shot and well-acted adaptation of a Robert A. Heinlein short story, the secrets of which may or may not be apparent early on, but it’s a hell of a time getting to the finish line. 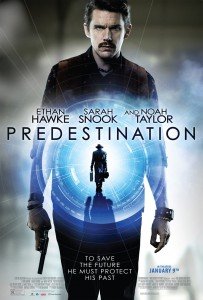 Think of the ouroboros – the snake eating its own tail – when you watch this movie. Or, consequently, think about another age-old conundrum, mentioned by the nameless Temporal Agent (Ethan Hawke) as he talks with a loner in a bar: the chicken or the egg and which came first. Apparently, the role of the Temporal Agent is to make sure that history unfolds as it should, that events – no matter how catastrophic or innocuous – occur in the order they’re supposed to.

The loner tells his story about a girl named Jane (Sarah Snook), a pretty girl who enrolls in a government program called SpaceCorp, which at first looks like (as intimated by the interview questions) a sort of joy division for the United States astronauts, but honestly looks more like the serving women you see in the first half of Stanley Kubrick’s 2001: A Space Odyssey. Excelling at everything she does, Jane moves through the training with ease, which leads her to the next phase of her life, where everything goes kafluey.

As this loner’s story unfolds, the story will become obvious and the twists will, no doubt, be telegraphed. However, the sheer pleasure of Predestination is how everyone gets to where they need to go and what they do once they’re there. Ben Nott’s deeply colored and mysteriously-framed photography keeps the viewer in the game, almost becoming a character itself, keeping us in suspense as each sequence reveals its secrets, and boy howdy, this movie’s full of secrets. For fear of disseminating some of those secrets, I’m going to try to dance around it a bit. See if you can keep the beat with me, willya? 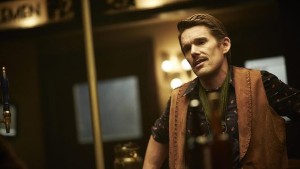 There’s one word that can undo this entire film, and that word is “why?” Predestination is the ultimate time travel paradox movie, with no relief or end to its machinations. Take one piece away from the film, and it can collapse upon itself, which is how tightly wound the story is; each partition is reliant upon the other, with every scene change and every set being important enough to take notice from the very first shot. It’s a head-spinning, mind-melting trip that will have you wondering and questioning the importance of Jane for days afterward.

Australian newcomer Sarah Snook gives the kind of performance veteran actors pull off with a lot of difficulty. You can almost feel how good a handle she has on Jane and her growth as her own person, with her weighty emotions being completely real and palpable. This is not an actress playing a role; this is a transformation on several different levels, with Snook playing well into every step (literal and figurative) she takes. Her performance is definitely the centerpiece of the movie, even with Ethan Hawke’s more recognizable name and talents being much of this movie’s marketing hook; while Hawke is not to be dismissed out of hand, Snook is an unexpected powerhouse.

The Spierig Brothers, Michael and Peter, have made into flesh renowned science-fiction author Robert A. Heinlein’s short story “ – All You Zombies – “ (don’t go and read it now if you haven’t, you spoiler fiends!) and turned in a surprising treat for an early January entry. Benefiting from great performances and an intriguing, engrossing story, Predestination is a sparkling, energetic, and wonderfully low-key science-fiction film; it may not have the razzle-dazzle of its bigger-budgeted, excessive brethren, but the Spierig brothers infuse it with more than enough energy and style to make it look just as good. It packs an equally great punch, the lasting effects of which will stay with you long after the movie’s over.