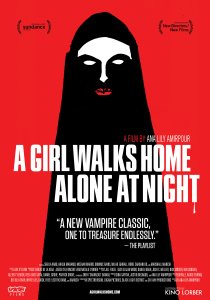 As badass as it sounds, it would totally give the wrong impression about this film. A Girl Walks Home Alone At Night isn’t your average vampire movie; it’s not your average love story; it’s not your average anything. Relying on simple filmmaking and a terrific female lead, A Girl Walks Home Alone At Night makes its mark as the antithesis of even the best of the vampire films by not being ostentatious, brutal, or sparkly. Instead, it’s a 99-minute black-and-white exercise in subtlety and playing to open spaces.

By “open spaces,” I’m not just referring to the deserted town of Bad City, Iran, where the sidewalks and houses grow increasingly empty, while a pile of bodies rises in a ditch near the oil derricks on the other side of town. I’m referring to large gaps of silence which the actors use to intimate details about their characters. There’s not a whole lot of dialogue in A Girl Walks Home Alone At Night, and that’s largely due to Amirpour’s “show, don’t tell” approach. When she finally decides to “tell,” we don’t learn much except for how women are seen in this little corner of the world; honestly, it feels like 90% of the dialogue consists of a man telling a woman what she’s worth, or a woman telling another what her dreams and aspirations should be.

The rest of the dialogue is spent on Hossein (Marshall Manesh), a junkie whose son Arash (Arash Marandi) has had enough. After leaving a party, Arash runs into The Girl (Sheila Vand) on a deserted street. He’s dressed as Dracula; little does he know she’s the real thing and looking for a bite, yet she’s strangely drawn to him, and not in a bloodsucking way. Maybe it’s his state of intoxication or his obvious want for a friend or someone just to be with, or maybe it’s that he has an openness about him that transfixes her somehow.

Amirpour avoids stock vampire clichés and goes for showing the naked honesty between two people trying to hold on while foundering in a sea of loneliness, despair, and death. There’s nothing horror-like about this movie; instead, it’s a boy-meets-girl drama with the odd quirk of having the girl be a vampire. Vand’s blank slate face exudes an almost-childlike innocence that belies her true nature. She’s that moving shadow in the dark that you thought you saw out of the corner of your eye. She’s that person staring oddly hungrily at you when you get out of your car. But she’s also the girl who, even though the chance for a bite presents itself, nestles her head on Arash’s chest in search of the kind of comfort that can only be given by simply being next to someone.

Everyone in this film is looking for someone else’s approval or companionship, whether it’s a prostitute wanting to be acceptable to her pimp, a father who’s so far gone that he yells at his absent wife for leaving him, or the film’s central couple. When you’re surrounded by that much space and death, there aren’t many ways to survive it unless you have someone on your side. Everyone who doesn’t have anyone on their side is lost in this film, and those who do are saved. A Girl Walks Home Alone At Night speaks to that loneliness and our want for love or friendship; who knew that vampires could be just as lost as we think we are?