A Most Violent Year

Posted by Eddie Pasa on January 16, 2015 in Movie Reviews, New on DVD and Blu-Ray / No Comments

Here’s what’s great about A Most Violent Year: its simplicity in its filmmaking. It’s a very matter-of-fact, cut-and-dried, take-it-or-leave-it approach that writer/director J.C. Chandor takes with this tale of a man caught between doing the right thing and immoral acts to keep his oil business afloat. I liken it a lot to Francis Ford Coppola’s groundbreaking 1972 masterpiece, The Godfather, in that we see an honest portrayal of people caught in places they don’t want to be. 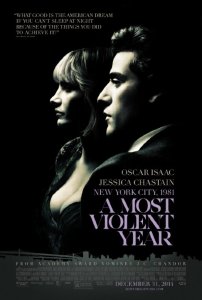 Both A Most Violent Year and The Godfather feature brutally honest brushstrokes when bringing their lurid subject matters to life. Violence in both films is presented non-salaciously, laying bare the brutality and horror of its nature. Likewise with its characters, they are both rich with strong personalities and silently dominating figures whose machinations ultimately breed an ending that may or may not be done to their satisfaction, but are done nonetheless.

The out-of-nowhere Oscar Isaac, renowned for last year’s Coen Brothers awards entry Inside Llewyn Davis, steps smartly and with a bold subtlety into the lead role as oil tycoon Abel Morales, first seen finishing a land deal across the Hudson River from Manhattan. It’s a land deal that will give him ample waterfront property to import his crude oil with minimal disruption, and it will ultimately make him one of the New York area’s biggest power players in the oil business. Unfortunately, it’s also a deal that’s going to bring the law and his competitors after not just him and his business, but his family as well.

So begins Abel’s near-fanatic devotion to keeping the best morals for himself and his business, even when his truckers are getting shot at and hijacked. Also driving him near to madness are the manipulations of his wife Anna (Jessica Chastain), a shrewd businesswoman whose streetwise tactics clash nastily with Abel’s free-and-clear plan of having nothing to hide from the law, who are represented by Agents Lawrence (David Oyelowo) and Lange (Ashley Williams), almost hellbent on destroying Abel’s business. 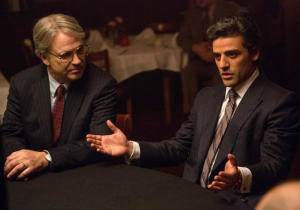 The film’s heft is brought to bear by Abel desperately walking that line between corruption and passive compliance; he doesn’t want to use guns or shady bookkeeping or any of the things that seem so normal these days in big business. However, because he cares deeply for his family, his workers, and their families, how far is he willing to go to protect them?

Owning every frame of this movie is Bradford Young’s cinematography. Young captures early-’80s New York and its surroundings with the purpose of allowing you to feel Abel’s solitude; there aren’t a lot of busy shots or overly bustling handheld camerawork to distract you from the story. You’re made to feel as if you’re watching a near-stageplay-like drama unfold, with its characters weaving in and out of the wings, dropping in when necessary and leaving when not.

Also commanding your attention is Oscar Isaac, as he plays the immigrant who came up from nothing to becoming a territorial shark with one deft move. His pitch-perfect performance has garnered a lot of attention (and got my nomination and vote for Best Actor in the 2014 Washington Area Film Critics Association awards) because of a performance that exudes a lot of power. It’s not an overt kind of power, the kind you’d see Tommy Lee Jones or Nicolas Cage overplaying in some of their larger movies; it’s more about the quiet power Abel has over his family, his business, his enemies, and most importantly, himself. Isaac plays with this power wonderfully, emoting being crushed and crumbling on the inside but maintaining an affable sense of pride and control that makes this performance one of the best of 2014.