Posted by Eddie Pasa on January 16, 2015 in Movie Reviews / No Comments

Merriam-Webster Online defines “still life” as either 1) a picture consisting predominantly of inanimate objects, or 2) the category of graphic arts concerned with inanimate subject matter. Thinking about writer/director Uberto Pasolini’s new film Still Life, I can’t think of a more appropriate title. For 92 minutes, we are immersed in the routine world of a man who arranges funerals and eulogies for people who die alone and forgotten, with no family or friends to attend to them. But the question is: is the titular “still life” that of the people he’s taking care of, or is it his own? 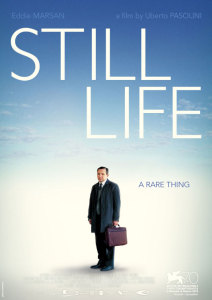 John May (Eddie Marsan) has been doing the same job for over 20 years: making sure the dead have someone to remember them. Finally, faced with downsizing and with his job being absorbed into another department, he has one last case: to find anyone who remembers a man who’s recently been found dead in an apartment across from May’s. Pleading with his superior Mr. Pratchett (Andrew Buchan) for more time to be able to finish this final task, he takes it upon himself to travel far and wide to find anyone willing to attend this man’s funeral.

We experience May’s solitude and abject loneliness, peering out the windows and observing the life around him. He has no social life, nor does he talk with anyone on a regular basis, except for maybe a stray morgue attendant or the priest who celebrates the funerals May arranges. May is a gentle man, soft-spoken in his demeanor and not very jokey; he represents the more humane and human side of us, caring about those for whom no one cares, and going that extra mile to make sure that each case is closed to the fullest of his capabilities. 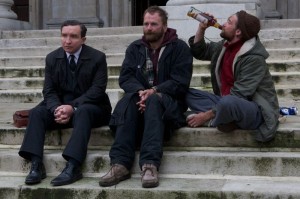 Eddie Marsan, recently seen in such films as J.J. Abrams’ Mission: Impossible III and Edgar Wright’s The World’s End, is a modern-day chameleon – slipping in and out of genres and roles so different from whatever he played last. Here, in Still Life, he plays the worry-laden underdog, believing that no one should check out alone. This last mission starts bringing May out to the world, which Marsan plays like a volume knob slowly being turned up so that one can finally hear and experience life outside a dull office and a morbidly sad job. This is a performance that I’ve never seen from him, and it’s an absolute wonder.

However, it’s unfortunate that you can almost see the sadly ironic twist coming maybe halfway through the film, or even earlier, if you’re quick at that kind of thing. The gutpunch of an ending that Pasolini has written is fitting and almost wholly depressing, but it also feels a little trite. I’ll allow that this is probably the only way Still Life could have ended, but that doesn’t mean the film’s impact is made less in any way. No matter if you can guess the ending of this film, it’s still a joy to see someone breaking free of his trappings and seeing how beautiful life can be, even at an advanced age.