Posted by Michael Parsons on January 16, 2015 in Movie Reviews / No Comments

As such a prolific and versatile actor, it’s not surprising that Julianne Moore occasionally takes one-note roles in films line “Nonstop” and “The Hunger Games: Mockingjay”; she’s reserving her singular talent for projects like “Still Alice”, an unsentimental tear-jerker that depicts the horrible realities of Alzheimer’s disease in mature, relatable, sometimes even humorous terms.

Based on the bestseller by neuroscientist Lisa Genova and adapted for the screen by writers/directors Richard Glatzer and Wash Westmoreland (“The Last of Robin Hood”), this film could easily have become a sappy movie-of-the-week if tweaked slightly in the wrong direction. While traces of such trappings exist at the very fringes of the picture, the filmmakers clearly have a deep enough respect for the subject matter not to besmirch it with soap-grade melodrama (though this outstanding cast could probably make something compelling out of even the most threadbare cliché). This is a rare, wonderful film. 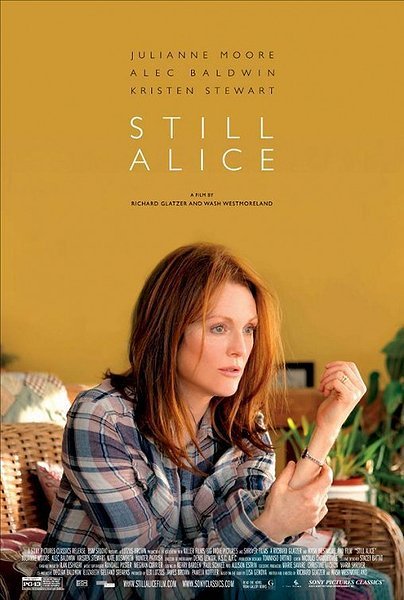 Whether or not you buy into awards buzz, Moore deserves every bit of attention she’s been receiving (including an Oscar nomination) for her portrayal of  Alice Howland, a revered 50-year-old linguistics professor at Columbia University. Alice has a great marriage (Alec Baldwin plays her husband Tom), three grown children (Kate Bosworth, Kristen Stewart and Hunter Parrish) and a mean “Words With Friends” game.

Then she receives a life-changing diagnosis. After some memory lapses —  a few forgotten words during a speech and a scary episode during a jog — a PET scan corroborates her doctor’s suspicions: Alice has early-onset Alzheimer’s. Even more terrifying, the disease is familial, meaning there’s a chance it has been passed along to the kids .

Slowly stripped of the very cognitive attributes on which she’s an expert, as well as what makes her the exuberant, life-embracing person that she is, Alice struggles to maintain her dignity as the symptoms worsen. While the progression is harrowing, something an over-actor might have inadvertently turned into a comic perversion of the source material (particularly a later scene in which a terrified, dementia-stricken Alice soils hers pants because she can no longer find the bathroom), there’s an optimism about the film that carries us through the more painful moments as if the outcome weren’t inevitable.

Considering what she’s capable of on-screen, Moore seems to have perfected the art of taking on absurdly demanding material without ever scene-chewing, and it allows room for her co-stars to shine, notably Baldwin as her steadfastly loyal, loving hubby, and especially Stewart as her youngest daughter Lydia, an aspiring thespian with whom Alice often butts heads. Both give excellent performances (Baldwin is a very convincing crier), but it’s Stewart’s character who is integral in conveying the film’s message about compassion, a weight that the “Twilight” star seems to carry with an effortless grace.

Perhaps the most telling moment in the film comes from a video message that Alice records for herself with instructions on what to do when things get really bad. She says: “Your life has been anything but tragic”. This is the feeling that resonated with me after the credits rolled. “Still Alice” is more than a great drama, it’s a genuinely moving experience.