The Tale of the Princess Kaguya

Posted by Eddie Pasa on November 3, 2014 in Movie Reviews / No Comments

(Please note: this review is of the Japanese-language version, not the newly-dubbed English version.)

There’s something ethereally special about Isao Takahata’s The Tale of the Princess Kaguya. Although devoid of the polished, finished animation that Studio Ghibli’s productions – My Neighbor Totoro, Spirited Away, and From Up On Poppy Hill among them – the dreamlike sketches that comprise this film allow us to focus more on the story and to enjoy the simplicity of almost brushlike strokes of the animators’ pencils. 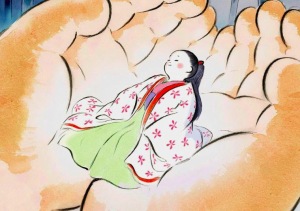 Based on an old folk legend called “The Tale of the Bamboo Cutter,” this film runs away with our imaginations while toying with our ideas of what happiness should be. Is happiness truly self-owned, or is it merely a projection of what other people want for us? So begins the short life of Kaguya (Aki Asakura), a mysterious being found inside a bamboo shoot by the eponymous Bamboo Cutter (Takeo Chii). After taking her home to his wife Ōna (Nabuko Miyamoto), they start to notice something else strange: Kaguya is growing at such an alarming rate, starting off as a baby and proceeding to toddlerhood and adolescence over the course of a few days.

The Bamboo Cutter finds other things in bamboo shoots, such as cloth (supposedly made for royalty) and a whole hoard of gold pieces. This gold stash enables him to move his family out of their poor mountain area and into a city mansion, replete with servants and a woman named Sagami (Atsuko Takahata), whose sole purpose is to teach Kaguya how to be a proper gentlewoman. All the while, the Bamboo Cutter maintains that this is the good life and it must be what Kaguya wants, isn’t it?

However, her presence here on Earth has been riddled by strangeness, from the way she was found, the way that nature’s objects bend to her will, and how she manages to be great at everything she attempts. There’s an explanation brewing, but it’s quickly glossed over by the legend of her beauty and wisdom spreading to the noblemen, who all want either a look at this woman or to marry her. 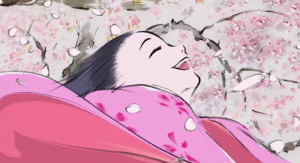 The Tale of the Princess Kaguya adheres strictly to the folktale, deviating little from the text except to develop more of Kaguya’s personal relationships with her family and her mountain neighbors, including a young man named Sutemaru (Kengo Kora) with whom she seems to find a romantic and kindred spirit.

Isao Takahata has fashioned a haunting, affecting film using a rich story to complement its sparse animation. We find ourselves truly digging into Kaguya’s mystical and cryptic history while rooting for her to find the happiness she seeks out of her short time on Earth. The film can also be seen as a challenge to traditional gender roles, as Kaguya definitely doesn’t act like a princess of her time. Her indomitable spirit cannot be contained, no matter how much Sagami or the Bamboo Cutter wish it to be; she is a character truly unbridled and free.

The Tale of the Princess Kaguya does leave out one very important part of the original folk tale for the sake of a clipped, bittersweet ending. However, this film is damn near to perfect as a film can get, so I’m willing to give that a pass. It is a breathtaking, powerful, sublime film in which to find oneself enraptured. Kaguya embodies that hope and spirit that we all wish to have; using it as a metaphor for our lives here on Earth strikes home with such a chord, you’ll be thinking about it and musing upon it for days to come.