Posted by Michael Parsons on October 27, 2014 in Movie Reviews / No Comments

Maybe the biggest surprise of this Halloween season is Alfonso Gomez-Rejon’s clever re-working of the 1976 film “The Town That Dreaded Sundown”, which itself barely cleared cult status outside of Texarkana where the string of grisly unsolved murders that inspired the film had occurred in 1946. Director Charles B. Pierce’s original was nothing to scoff at, to be sure, and perhaps its hooded killer (known as The Phantom) even served as an influence for later icons in the slasher sub-genre (Jason Voorhees’ pre-hockey mask get-up in 1981’s “Friday the 13th Part 2” specifically comes to mind), but it’s not exactly gracing a lot of must-see lists. At least, not mine. 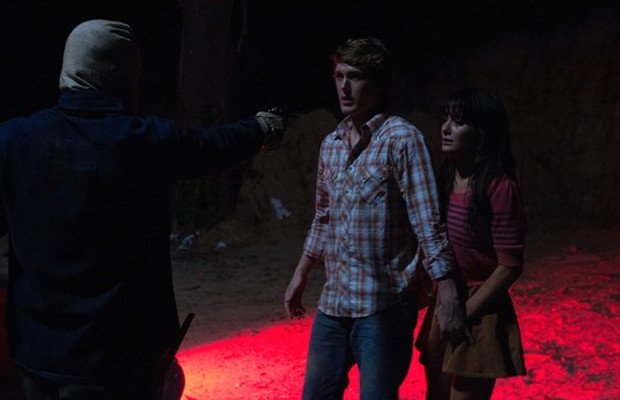 But instead of simply remaking the film, Gomez-Rejon (FX’s “American Horror Story”) has done something interesting: He’s incorporated Pierce’s original pseudo-doc into his narrative, making for a strange, freaky “movie-within-a-movie” that remains tonally serious despite its built-in self-awareness and a few in-jokes. Sure, it has been done before — Wes Craven’s “New Nightmare” upended the entire “Nightmare on Elm Street” series by having Freddy Krueger emerge from the movies to come after the actors themselves — but it’s never been done this well, and never, as far as I know, with something that’s ultimately rooted in a true story.

The film takes place in 2013 Texarkana, Arkansas, where some of the younger residents spend their Halloween night celebrating the town’s macabre history by watching the original “Town That Dreaded Sundown” at the local drive-in, a ritual that folks old enough to remember what actually happened don’t exactly take kindly to.

For the kids, the horrific true events are so far in the past that it might as well be urban legend. But it looks like the Phantom Killer has returned when high school senior Jami (Addison Timlin) and her date Corey (Spencer Treat Clark) are attacked by a hooded assailant at Lover’s Lane, where Jami’s life is spared only so that she can remind the townsfolk what had gone down almost 70 years prior. “Make them remember”, he grumbles at her through his potato sack mask.

A psychedelic/slasher/mystery that settles in somewhere between “Scream” and Patrick Lussier’s superb remake of “My Bloody Valentine”, “The Town That Dreaded Sundown” has all sorts of grisly fun with the genre as the killer preys on young (and not-so-young) lovebirds, sometimes mimicking the original movie (a trumpet used as a bayonet should jog the memory of those who’ve seen it before) and sometimes in new and creative ways (a nasty motel scene that I won’t spoil). But the best moments come courtesy of cinematographer Michael Goi and his brilliant bird’s-eye views: the first sequence of the film descends upon the crowd at the drive-in theater in one long tracking shot, and a later angle lingers above as the killer pursues a young woman through a corn field. 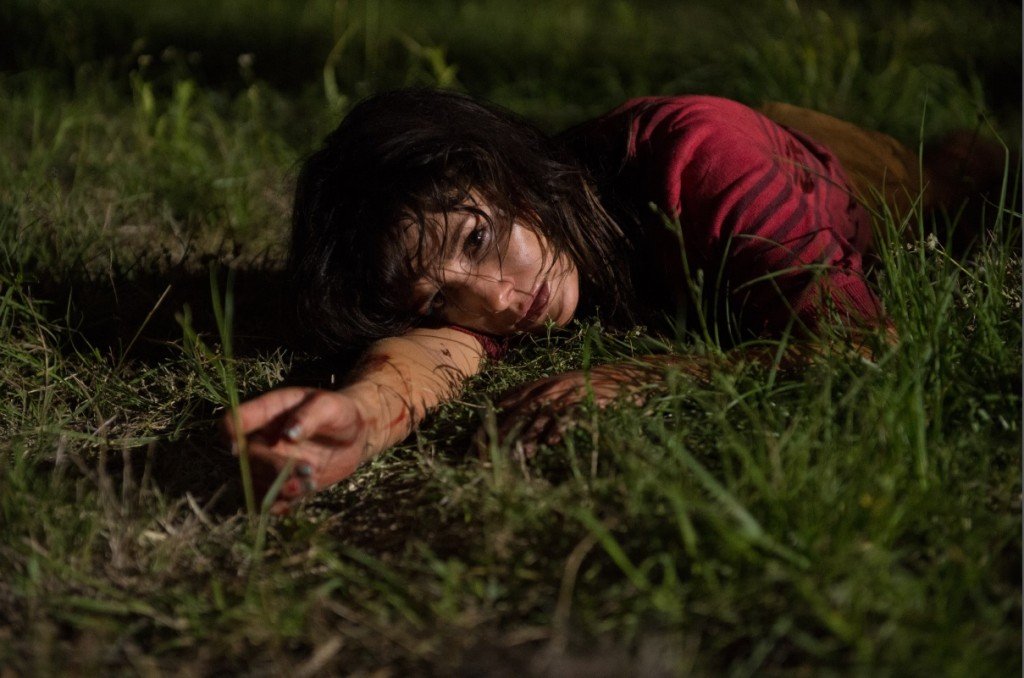 Unlike most slasher-style flicks, the teenagers in this crafty re-imagining aren’t treated like the typical nitwits that get hacked up just because they’ve decided to fool around on a knife-wielding maniac’s turf. The lead, played well by Timlin (“Odd Thomas”), is a convincing mixture of vulnerable and capable, and her claims are taken seriously by Texas Ranger “Lone Wolf” Morales (Anthony Anderson) when she receives an email from someone claiming to be the Phantom  — a lead that ends up pointing in an unexpected direction. Even with the support of Morales, Jami launches into her own investigation with the help of Nick (Travis Tope), a suspiciously gentle young man with a tragic past who works in the town’s archives. The friendship they develop is unusual and realistic, a testament to both the actors and Roberto Aguirre-Sacasa’s thoughtful script, and Tope’s (“Men, Women and Children”) deliberately hard-to-read character is one to both sympathize with and keep at arm’s length.

There are plenty of creative risks taken here, particularly in its cross-cutting of images from the original film into murder scenes and, in at least one instance, a flashback/dramatization of the sequence being filmed, and that’s what makes this “Town That Dreaded Sundown” such a supremely original horror picture. A stylish, kaleidoscopic nightmare that could easily have been overly disorienting — or just plain ridiculous — in even marginally less capable hands, the film announces early on that it’s going to be something more diabolically amusing than your typical slice-n’-dicer, and for such an ambitiously off-the-wall undertaking, Gomez-Rejon has managed to pull off one of the best horror films of the year.