Posted by Eddie Pasa on November 4, 2014 in Movie Reviews / No Comments

Please note: this review originally gave Interstellar three stars in 2014. The intervening years have provided a different perspective worth a rating change in 2019.


“What’s the most resilient parasite? A bacteria? A virus? An intestinal worm?”
“What Mr. Cobb is trying to say—“
“An idea. Resilient, highly contagious. Once an idea’s taken hold in the brain, it’s almost impossible to eradicate it. A person can cover it up, ignore it – but it stays there.”
— Cobb and Arthur, from the screenplay of Inception

I open this review of Christopher Nolan’s latest film, Interstellar, with a quote from one of his earlier films for a reason. Thinking about Interstellar made me wonder what I’d missed about the film, as I couldn’t help feeling a little underwhelmed by it all. Even though I stayed away from all the pre-release hype, interviews (sorry, Kevin), early reviews, and the last trailers, Interstellar felt a bit from time to time like a 169-minute big-screen, big-budget version of a “Doctor Who” episode. A “Doctor Who” episode featuring Matthew McConaughey in the driver’s seat of the TARDIS, that is… 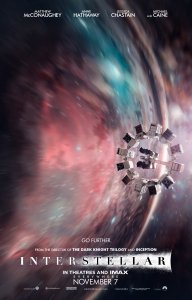 This science-fiction epic, co-written by Nolan and his brother Jonathan, is fairly simple on the face of it. We, as a species, have exhausted Mother Earth for pretty much all of what she could give to sustain us, to the point where the only crop being grown is corn. Dust storms and blight plague the farming community in which Cooper (Matthew McConaughey), his father Donald (John Lithgow), and his children, son Tom (Timothée Chalamet) and daughter Murph (Mackenzie Foy) live. Murph has been affected by what she calls “a ghost” that haunts her room, knocking over books and leaving Morse Code messages in the dust.

These incidents seem to be calling her and her father – an engineer and former astronaut of a now-defunct space program – to a specific set of coordinates, where an underground mission is underway to find an alternate planet to ensure the survival of humanity. Because of Cooper’s abilities, he is asked by an old friend, Professor Brand (Michael Caine) to join his daughter Amelia (Anne Hathaway) on this last mission. They’ve found a wormhole near Saturn and are on a last-ditch effort to find the survivors of the Lazarus project – three scientists who have journeyed to other planets in other solar systems – to see if they have found any of their planets to be habitable.

Interstellar is spectacular event filmmaking. Nolan’s use of the larger format film types – anamorphic 35mm and full 15-perforation 70mm IMAX – combined with cinematographer Hoyte Van Hoytema’s evocative, stirring cinematography fully immerses you in the harrowing mission, seating you right alongside Cooper and Brand as they navigate harsh planet climates and the dangers of outer space travel. The special effects work is wonderful, and as Nolan shot and edited this on film (as it so proudly says in the closing credits), every effort should be made to see this in a full IMAX theater, like the ones here in DC at the Smithsonian museums.

Speaking of film… remember the opening quote? Here’s what came to my mind while driving home from the theater after watching Interstellar, and it’s something I just can’t shake: this movie is all about the struggle to keep film relevant in the face of cheaper digital production. Almost everything in this film parallels Christopher Nolan’s well-documented fight to keep using film to shoot his movies. The central character, Cooper, represents film and the old ways; he is capable of doing things that the new, younger scientists cannot. At every turn, attempts at negating Cooper or shutting him down entirely rear their ugly heads, whether it be a command straight from the top or getting grief from his own child, being angry and hurtful when Cooper decides to join the mission. 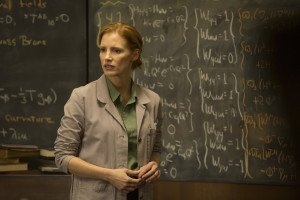 The death of Earth not only represents the death of the ideal, it also represents the death of the tangible. The very thing that has sustained the film industry is now under direct attack from an unseen force – much in the way that digitally-shot productions are just ones and zeroes instead of physically-captured pictures in a frame. A lot of the “ghost” communication is through antiquated means such as Morse Code, as if wanting to desperately hang on to older, reliable forms of communication. Hathaway’s aptly-named character, Brand, seemingly wants to go the easy route, not paying much heed to Cooper’s wisdom (a parallel for film studios and their lack of originality). One of the Lazarus survivors, a fellow named Mann (as in “stick it to The…”), tries to halt any further advances that Cooper tries to make, saying that it’s all for naught and that we should just resign ourselves to our fates. Even their orbiting spacecraft, the Endurance, after having been damaged and set into a near-suborbital spin, looks like a film reel being torn apart.

It’s a very thinly-veiled subtext that makes perfect sense when you take Nolan’s love for film into account, and I don’t mind that at all. What I didn’t like about the film was how tremendously average the film’s script is. Yet again, we have another Christopher Nolan movie where someone’s trying to plant an idea in someone’s head; from Following to Memento to Insomnia to Inception to Interstellar, Nolan seems to be overly preoccupied about the genesis of inspiration. It’s a motif that has served him well, but its use in the film’s third act turns Cooper into a bit of a deus ex machina, even if he’s caught in a place that should have killed him. Logic and supposedly-known rules take a backseat to trumped-up schmaltz in the third act, and I can’t help but feel it was a bit of a letdown.

However, what’s to be noted here is how much Nolan differentiates his widescreen, shot-on-glorious-film spectacle from other pretenders to the throne. Interstellar makes a case for good, old-fashioned, story-driven extravagance, rather than having the effects be the story. Humanity’s survival in a world decimated by an extreme case of climate change (it gives a whole new meaning to the phrase “living in the Dust Bowl”) is a pressing theme in today’s culture war between climatologists and their deniers; while that is what drives Interstellar, it’s the Nolan sturm und drang that gives the film its oomph.