Posted by Eddie Pasa on August 7, 2014 in Movie Reviews / No Comments

“It’s Teenage Mutant Ninja Turtles! A reboot of a 1990 filmed adaptation of a comic book property! Starring… MEGAN FOX’S HALF-OPEN MOUTH! And gratuitous shots of her butt! And TONS OF UNNECESSARY COMPUTER GRAPHICS! Coming soon to a theater near you to rob you of the dollars that should have been going to Guardians of the Galaxy!” Well, that’s what the announcers would be saying on the radio if there were any truth in advertising.

Honestly, did we need another Teenage Mutant Ninja Turtles film? After the relative cheese of the first trilogy, followed by a somewhat decent animated film, did we need yet another film explaining that the titular Turtles and their rodent master Splinter were created from exposure to a green ooze? That the Turtles were brought up on pop culture, so they sound like an accurate reflection of our current vocabulary trends? And that Splinter trained them to be lightning-fast ninjas to combat the growing darkness spread over New York City by the Foot Clan?

That’s what you get in the first thirty minutes of the movie. However, there’s a new twist to the proceedings: Channel 6 reporter April O’Neil (the aforementioned Megan Fox) has a tie to the Turtles and Splinter, one never before discussed in any of the previous filmed incarnations. It seems that as a child, her chemical researcher father and his partner Eric Sachs (William Fichtner) had done experiments with a type of regenerative mutagen aimed at being a cure-all for any type of disease, and they had experimented on – yup, you guessed it – four box turtles and a rat. When a fire breaks loose in the research facility, young April saves them from destruction, setting them loose in the sewers of New York City. And now, it’s Splinter and the Turtles’ turn to save April from the evil Shredder and the Foot Clan. 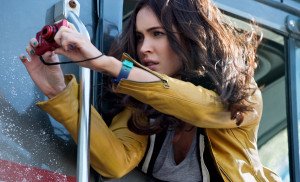 Here’s the thing: we don’t need this movie. We flat-out don’t. But as long as it’s being done, we might as well be entertained, right? Wrong. This iteration of Teenage Mutant Ninja Turtles would be great if it focused more on the interplay between the four turtles and their fight against the Foot Clan. However, this story is being told through the eyes of April O’Neil, so that means MEGAN FOX IN EVERY SHOT. And every shot of Megan Fox is that close-up of her with her pouty, half-open mouth, as if to say that she’s breathless with disbelief at the events unfolding in front of her. Newsflash: it gets old really quick. And just when you think it’s gotten old, that’s when you realize that the movie isn’t even half-over yet.

The computer-generated Turtles are fascinating to look at, with their humanoid expressiveness being charming and disarming, even though they’re supposed to be super-badasses. Somehow, between Michelangelo’s intentionally cheesy flirting, the wonderful uber-geek that is Donatello (he even fights with his techno-goggles on!), the stolidness of Raphael, and the strong leadership of Leonardo, the entertainment factor swells and thrives. Any time the Turtles are doing their thing without any human interference, it’s a joy to watch.

However, that’s not the movie that Liebesman and company gave us. We are instead forced to watch scene after scene of the Turtles having to bail out the damsel in distress. Granted, this film was not made for critics like me, but for a new wave of 14-year-old boys who want the comic books to be just as fast as the current action movies. The martial arts game is upped, but it’s nothing special. The 3D conversion is immersive at points, but it’s not worth the extra price. The shallowness of this Teenage Mutant Ninja Turtles outing is proven, at last, by its closing theme song, the chorus of which goes, “Knock knock, you about to get shell shocked.” Such prose. It may not be better than “T-U-R-T-L-E Power” by Partners in Kryme, but at least there was some kind of substance there. Liebesman’s Teenage Mutant Ninja Turtles lacks a lot of substance, but the Turtles themselves almost make up for it.