Posted by Michael Parsons on August 8, 2014 in Movie Reviews / No Comments

Brendan Gleeson plays the quietly forlorn but devoted Father James Lavelle, a Catholic priest who is threatened with death by a mysterious guest in his confessional booth. It’s a shocker of an opening line, as the unseen parishioner graphically details his molestation from a priest at an early age, but James doesn’t necessarily appear to be shocked. The man on the other side of the partition believes that the only real way to make his statement is to take the life of a good priest, which Lavelle is. His demise is promised in one week’s time, the following Sunday.

This hardly seems like an intro for a film with a sense of humor, but writer/director John Michael McDonagh’s “Calvary” is as wickedly cheeky as it is thoroughly disconcerting. The dialogue is like something that might have resulted from a creative sit-down between Edgar Wright and Cormac McCarthy, if religion were the subject. The premise, however, could have come from Hitchcock or Agatha Christie; it’s a whodunnit set in motion before any crime has been committed, and the potential victim is 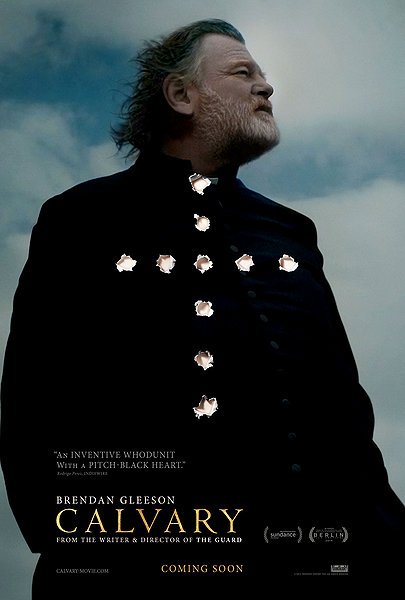 the film’s only detective (the town’s police chief, who ends up lending Father James a pistol, is too busy in his own extracurricular escapades to care). Father James claims to know who the culprit is, or at least that’s what we’re led to believe. Regardless, his seemingly unbiased and steadfast attention to the welfare of the townsfolk, which outweighs the inclination to protect himself, reveals little of this knowledge to the audience.

Mass must not be in heavy attendance here in this small pocket on the Atlantic coast of Ireland, where Father James maintains his faith among his mostly faithless neighbors and butts heads with colleague Father Leary (David Wilmot), who is more accountant than clergyman. James is ridiculed relentlessly by the very people that he prays for, a group of damaged individuals who seem slighted by the priest’s very presence. Surgeon Frank (Aidan Gillen, riding the intensity of his “Game of Thrones” character), awkwardly comical butcher Jack (Chris O’Dowd) whose wife (Orla O’Rourke) openly cheats on him with physically abusive mechanic Simon (Isaach De Bankolé, playing a character from his native Ivory Coast), and a disturbed alcoholic millionaire (Dylan Moran), all make gestures at the priest’s expense (the most dramatic of which is Moran urinating on Hans Holbein’s 16th Century painting The Ambassadors in front of the priest — I’m told by Wikipedia that it’s loaded with symbolism appropriately mirroring their relationship, as well as other themes in the film). A virginal-looking, cannibalistic serial killer that Lavelle visits in prison (Domhnall Gleeson) ironically seems to have more respect for James’ old school cassock than the townsfolk do. 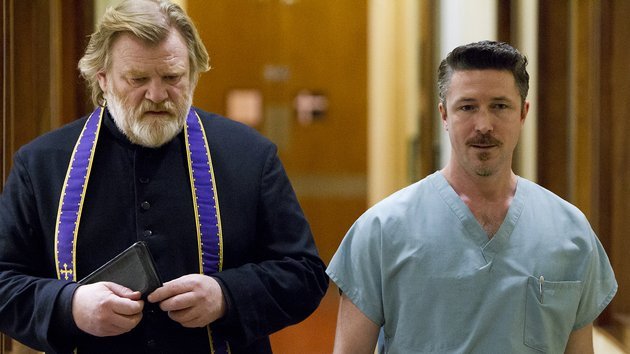 So soulless does this place appear that one might mistake it for the fifth ring of hell if not for the majestic sweeping Irish vistas (McDonagh recently joked with us that you typically only get these views in more romantic films like “Far and Away”). The local watering hole is a veritable den of suspects, where James does his daily do-gooding amongst borderline caricatures of at least a few of the Seven Deadly Sins (one of them, a gigolo that the police chief seems to have on retainer, is incongruously absurd). They mock and criticize mostly — at one point, Gillen’s venomously hateful doctor spouts a horrific story about a child’s surgery just to get James’ goat, and perhaps hint at his potentially impending doom — but it’s not until one of them burns down the church that the priest openly begins to lose his nerve.

And James is not without his own demons. Kelly Reilly plays his recovering addict daughter Fiona, who visits him after a failed suicide attempt, the scars on her wrists still fresh. Less outwardly desperate than Reilly’s similarly afflicted character in 2012’s “Flight”, though in some ways even more tragic, Fiona still hasn’t forgiven her father for abandoning the family when she was young, before he took his oath. As with most of the movie, their first exchange of words is surprisingly unsentimental, when James picks her up at the train station and the two discuss the error in her exit plan like she’d just botched a job interview (“you’re supposed to cut up and down, not side to side”, is the gist of her folly).

As it’s driven by some pretty blunt and unsparing dialogue, one might view the pitch black humor in “Calvary” as simply mean-spirited. Consider the moral subtext, though, and you’ll find a film with a lot more on its mind than religion and retribution. I’ll delve no further into plot points, but I will say that McDonagh’s sophomore directorial effort is an intelligent, challenging and uncomfortably amusing thriller. To boot, this is one of Brendan Gleeson’s finest performances to date.