Guardians of the Galaxy – Mike’s Review

I suspect that I won’t be in the minority when I say that James Gunn’s foray into the Marvel Cinematic Universe is one impressive piece of escapism, and that it might be the most visually extravagant movie you’ll see this summer. And that it’s surprisingly funny, thoughtful and well-developed. And that we finally have a movie where the 3D conversion is actually worth the added price of admission (and I didn’t even see it in IMAX).

“Guardians of the Galaxy” is big and silly, but it’s big and silly done in spectacular, visionary fashion. It re-instills the confidence that cinema can be both massive and creative, off-the-wall yet coherent, self-aware and also entirely out of its 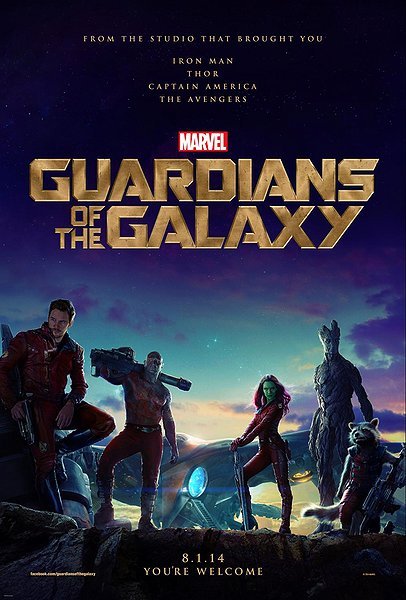 gourd. Yes, big studio-funded technology can be used for some great things if by the right filmmaker (let’s use any of the “Transformers” movies as the antithesis of that statement). This is the type of movie that Spielberg might have made had his early science fiction phase happened  during this era.

Despite any predisposed notions you might have about superhero films (let’s face it, they’ve become an integral part of contemporary cinema), there’s little that will be more rewarding than watching a prison break orchestrated by a wise- cracking raccoon in a zero gravity field, or a slightly over-confident space jockey gyrating his hips as a means of distraction rather than blowing something up (though the movie has more than its share of big explosions).

These are just examples that come to mind, but are a pretty good meter of what to expect in “Guardians”. A rambunctious mix of space opera, western and super hero epic, recalling things like “The Fifth Element”, “Serenity”, “The Last Starfighter” and “Star Wars”, this hyper-energetic space odyssey has virtually no self-restraint in its telling, other than to remain within the MPAA’s PG-13 guidelines (which hardly detracts from the sensational visual effects and stunning cinematography by Ben Davis).

Director James Gunn, who co-wrote the film with first-timer Nicole Perlman, and who only had a couple of  features under his belt himself before this (2010’s “Super” and 2006’s “Slither”), has put together something with more heart, humor and overall brilliance than its Marvel cousin “The Avengers”, and without the benefit of having origin films to acquaint us with the characters beforehand. To those who haven’t read the Marvel Comic by Dan Abnett and Andy Landing, the movie might seem like it’s making up the rules as it goes, but Gunn’s apparent refusal to slow things down for the layperson only proves his dedication to the storyline. Like with many of the elaborate action sequences in the film, to describe how our characters’ various abilities blossom (with one of them quite literally) would be like trying to detail the effects of a kaleidoscope to someone who’s never looked through one. 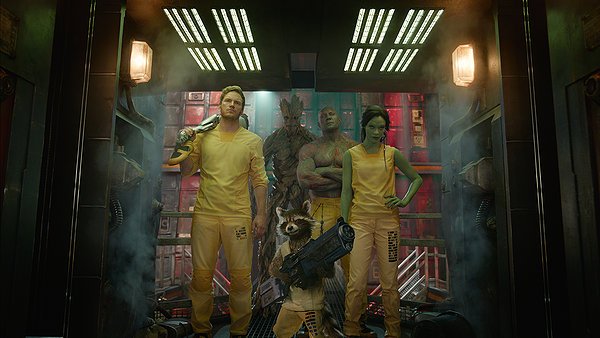 When self-proclaimed “legendary outlaw” Peter Quill (a.k.a. Star-Lord) gets wrangled by Xandarian military authorities (led by Glenn Close and John C. Reilly) for innumerable violations of intergalactic law, he’s joined by his future teammates in a high-security space prison: Gamora (Zoe Saldana), a sexy, tough green chick who owes a little something to Gene Roddenberry; Drax (a.k.a. The Destroyer, played by MMA fighter/pro wrestler Dave Bautista), an inmate whose family was murdered by Gamora’s evil surrogate father figure Ronan (Lee Pace playing the film’s primary antagonist); Rocket, the aforementioned smart-ass, gun-slinging, genetically engineered raccoon (voiced by Bradley Cooper), and Rocket’s bodyguard, a walking shrub voiced by Vin Diesel, who milks the only phrase in his character’s vocabulary (“I am Groot!”) for a multitude of meanings depending on his inflection. 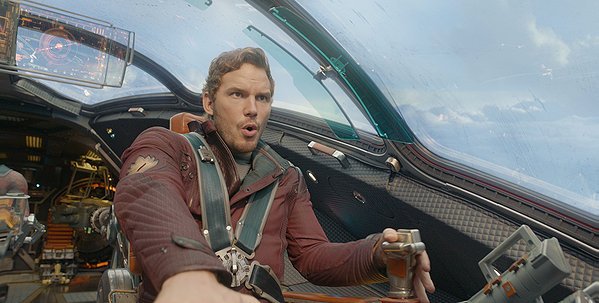 The film is fun and very funny, and full of ’80s pop culture references (it comes back to Kevin Bacon in “Footloose” more than once), but not at the expense of depicting its characters as living, feeling individuals with a measure of realism. After a quick expository visit to Earth circa 1988, where his mother utters her last words in a hospital bed before Peter is whisked off by extraterrestrials, we fast forward a couple of decades to Pratt’s seemingly happy-go-lucky Quill as he skips and dances along a beautiful but ominously barren planet to the tune of “Come and Get Your Love” by Redbone. The anachronistic soundtrack (which also includes “Hooked on a Feeling” by Blue Swede and “Moonage Daydream” by David Bowie, among others) provided by the “Awesome Mix” that Quill was given by his mother as a kid on what is apparently the most durable cassette tape known to man, lends a whimsical, nostalgic quality unusual for this type of film, as we might wonder what Quill has been up to in the intervening years. 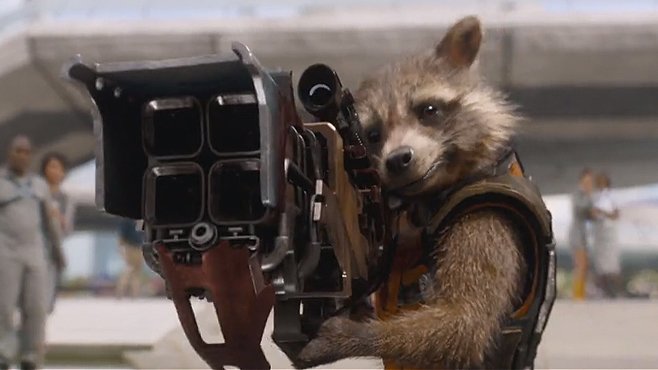 An encounter with some galactic baddies led by steel-eyed Korath (Djimon Hounsou) finds Quill leaping across chasms, employing the use of rocket boots and a nifty space mask, while holding a priceless orb that contains secret powers to be revealed later in the film. It’s an artifact that causes friction — at one point literally — between Quill and his reluctant teammates, who find themselves with a much more important task than they bargained for when the sinister Ronan (vaguely reminiscent of the Emperor from “Return of the Jedi”) sets his sights on it.

While introducing our unlikely heroes with their various ulterior motives, getting them together, and putting them on their path to multiple sequels (the second film is already slated for 2017) in just under two hours, Gunn has managed a stellar, surprisingly efficient comic book adaptation that embraces every zany, wacky, colorful aspect of the source material, putting it to celluloid like a giddy fanboy with $170 million at his disposal. The cast does wonders with their characters: Cooper is perfectly sardonic as Rocket, but also manages sensitivity; Bautista’s dry humor, which is derived from his character’s inability to understand metaphors, is just as impressive as the actor’s stunt work; Saldana’s vengeful Gamora is not entirely resistant to Quill’s advances, and holds that delicate balance between stoic warrior and potential love interest without becoming a cliché (this dynamic seems to draw from Harrison Ford and Karen Allen in “Raiders of the Lost Ark”). “Oculus” star Karen Gillan plays Gamora’s evil sister Nebula, and Michael Rooker is comically sleazy as Quill’s blue-skinned, snaggled-toothed abductor/boss Yondu.

It’s impossible not to recall the “Star Wars” cantina bar scene when the gang visits the lawless city of Knowhere, which is located in the skull of a long-dead celestial giant floating amidst debris in some remote strand of the galaxy, to negotiate a deal for the orb with a seedy character called The Collector (Benicio Del Toro). Here, “Guardians of the Galaxy” shows a director who has passionately studied memorable moments in movies with the intent of tipping his hat to them with his own artistic signature, not simply imitating them.