Fourteen-year-old Lorenzo (Jacopo Olmo Antinori) and his ten-years-older half-sister, Olivia (Tea Falco) are hiding out in an apartment building’s basement storage area. Each has a personal reason: Lorenzo, not popular in his high school, is ditching out on a class ski trip, while Olivia shakes off a case of the DTs while she kicks heroin. Bonded by the barest of threads, these two spend a week in each other’s company, escaping from their everyday pain.

So goes master Italian director Bernardo Bertolucci’s newest film, Me and You (original Italian title: Io e Te), a small-scale effort that yields small-scale results. It’s an easy watch, but don’t expect anything deep; much of the film’s time is spent trying to make this half-brother/half-sister relationship spark some kind of sexual tension, which (to me) is ridiculous. Just putting them in a room alone together with their respective troubles should have made for a worthier film. Alas, the direction Bertolucci chooses makes the film wind up spinning its wheels to its rather obvious conclusion. 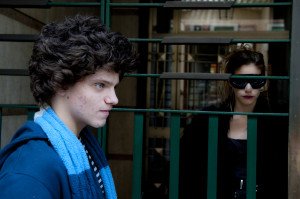 We know next to nothing about Lorenzo; his opening scenes and certain behaviors in the film may suggest that he’s a little on the obsessive-compulsive side, and he’s totally withdrawn from life around him. It’s not like others aren’t trying to reach out to him – a friend tries to get him to share a joint in the early goings, and his harried mother (Sonia Bergamasco) tries to engage with him and draw him out a bit (and gets really awkward conversation in return). He’s just not really “there,” opting to buy an ant farm and watch that instead of going skiing, as Olivia so vehemently points out during their stay together.

There’s really no reason for his Neverending Story-type escape into his own apartment building’s basement other than the suggestion that we’re supposed to take him as a misfit. Likewise, Olivia’s appearance and presence seem totally manufactured; flighty and intoxicated, she stumbles her way into Lorenzo’s temporary living space and makes like the Tasmanian Devil, throwing his physical and mental worlds into odd upheaval. Most of the time is spent with Lorenzo watching Olivia in the throes of withdrawal, basically being at her beck and call. Will she relapse? Will she keep her promise to Lorenzo? Falco plays it curiously ambiguously, with one foot seemingly in the real world, while the other’s inching towards getting another fix.

I suppose the last act’s figurative “up and out” somehow symbolizes their struggles being overcome, but it doesn’t feel like it means anything. The ending freeze frame is supposed to show a confident and more learned Lorenzo walking with a more assured stride, but it’s not earned. The only person that really shows growth in this film is Olivia, as we see more of her past and her current journey, making her the only sympathetic character, with a hell of a performance by Falco backing it up. Me and You seems to want to aspire to loftier purposes, but misses the mark somewhat, landing in a place where self-reflection and introspection only beget the most minor of revelations.