Playing for one night only at the Angelika Film Center – Mosaic on Wednesday, July 23.

Thinking about Manuel Martin Cuenca’s Cannibal (original Spanish title: Caníbal) gets me remembering something that Rob Gordon said in the novel High Fidelity: “You’ve got to kick off with a killer, to grab the attention. Then you’ve got to take it up a notch, or cool it off a notch…oh, there are a lot of rules.” Cannibal starts as everyone would expect a movie called Cannibal would, with a very simple, yet effective wide shot that quickly turns into the point of view of a man named Carlos (Antonio de la Torre), the titular cannibal on the hunt. However, any expectations of a gripping thriller should be laid to rest immediately after the climax of this opening scene, as that’s as exciting as it gets.

His modus operandi? Kill women and eat them. Simple. However, for the rest of Cannibal‘s running time, we are given no reason as to why he does this, much less how he started doing it. The ending kind of hints at a possible explanation for his psychosis, but it’s a bit of a reach. Cannibal is more of an in media res look at the life of a serial killer going about his day-to-day business. Knowing now that Cannibal is a character study of a psychopath instead of a straight-up horror movie, I’m inclined to be a little kinder to it than my original reaction to the film.

We’re not going into Hannibal Lecter territory here; there is no seething mad, unnerving antagonist to behold in these proceedings. Instead, we have a fairly normal person who just happens to do what he does in his spare time. By day, he’s a tailor in Granada, operating a low-key business and not really standing out in any way. His nighttime excursions, however, belie his solitary personality. He doesn’t take to outsiders well, especially when new neighbor Alexandra (Olimpia Melinte) moves in – she’s loud, brash, forward, and intrusive, showing a non-mutual interest in Carlos’ life. 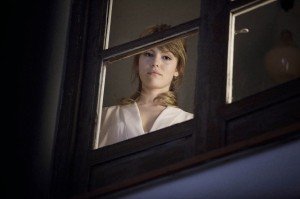 When she disappears, her sister Nina (also played by Melinte) comes looking for her. She’s almost a photo-negative of Alexandra, sweet and innocent, which enchants Carlos. He does everything he can to “help” her find Alexandra, allowing her access to his life and opening himself up to possible romance. This is where my questions about the film begin. Why Nina? What makes her so different from his usual target? Does he see her as a way out, a point of salvation? Her presence in his life changes everything about him – his routine, his killing method and success rate, and his fear of contact with others.

Cuenca keeps us engaged with Carlos, never permitting anything unnatural to come between us and him. There is no score in this film, nor are there sweeping, grandiose camera movements – Cuenca definitely wants to drop us in on a few days in Carlos’ life, making us experience everything he does. It’s almost as if Cuenca desires sympathy for Carlos, a seemingly normal man with a quirk beyond the pale. As cinematic serial killers go, Carlos is rather boring, never acting crazy or psychopathic, even when he’s committing his dastardly deeds. De la Torre gives a wondrously muted, detached performance, as if he’s numb to the world and its riches, seeking the only satisfaction he can muster: a pan-fried slice of female flesh. You can see that he’s somewhat disturbed by this odd peccadillo, wrestling with his conscience and trying to reconcile normalcy with the things that he does in his off-hours.

Cannibal may seem boring and stillborn on first viewing; however, it’s one of those movies that makes you think about its motives and its mechanics days after you view it. It’s a film that plays to lonely silences, with the excitement deriving from Carlos’ potential victims entering his sphere of consciousness. When he finally attempts to save himself, it may already be too late, with Nina throwing everything he knows and believes into chaos and ruin. Powerful in its stillness, beautiful in its simplicity, and beguiling in its final throes, Cannibal is an unexpected treat.