I’m at that point in my film watching life where I don’t need everything spelled out for me, but I’d like a film’s narrative to at least make sense. Sadly, Molly’s Theory of Relativity is not one of these movies; in fact, it’s just downright maddening. The way people act in this melodrama is truly head-scratching; people do things for no apparent reason, if only to serve some inane purpose, like existing for the writer’s whim. There are 9 characters in this movie, and we don’t know anything about them, as the ending all but undoes what came before it. Not in the sense of “it was all a dream,” but more in the sense of continuity. When you have two twentysomethings struggling to make ends meet and faced with one of the biggest decisions of their lives, does it make sense to all of a sudden start going down a road of possibilities to the point that it derails everything? Not to me, it didn’t.

Molly’s Theory of Relativity is an entire movie of wants. Molly (Sophia Takal) wants a new life. She wants money in order to start that new life. She wants to know what’s going on with the boy on the other side of the wall from the apartment she shares with her husband, Zak (Lawrence Michael Levine). She wants to see her family members before embarking on the journey she and Zak have set for themselves. Likewise, Zak wants his father Asher (Reed Birney) to take care of him financially and emotionally. He wants his inheritance. He wants his father’s approval of his professional life, which involves driving an airport shuttle and working at a Midtown Manhattan Burger King. Both of them even write their wants on one of their apartment walls, later recruiting their friend Ruby (Daisy Tahan) to write even more wants on another wall.

The movie starts us looking at the relationship between Molly and Zak, making it appear fun and carefree and a little kinky; soon, characters start popping up in their apartment that they neither pay heed to nor notice just sitting there on their couch. Among them are Molly’s mother Sasha (Cady Huffman), her grandmother (Rebecca Schull), and her Uncle Eli (Tom Morrissey), who seem like the ghostly interlopers that director/writer Jeff Lipsky wants them to be without really explaining their presence. He merely has Takal, in her dull monotone of a voice deliver some throwaway line about how one or the other has passed on or whether they’re still alive. For having the title role of the movie, Takal sounds a lot like a high school senior in her school play, with no weight or gravitas behind any of her words or actions. From half-hearted, ludicrous physical attacks on Asher to rapping with Ruby about her life and how it’s going, Molly is a relative zero. 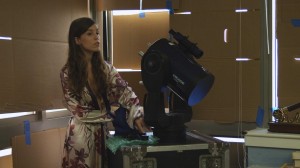 On the other hand, Zak turns out to be a pretty regular guy, and he is given the best characterization in the whole movie; Levine plays Zak with a fun mixture of childish imp and world-weary soul, and the screen lights up whenever he’s on it. Whether he’s going after his dad for walking out on his mother or sweetly titillating Molly with sexual advances, he’s as real as it gets in this movie. Our eyes wind up being drawn to him, rather than to Molly’s spiritless storyline. As well as Reed Birney, who gives the movie his level best, even when spouting lines that seem trite and forced. These two lend the movie a certain sense of reality, at least until Molly has to intervene and take over.

12 hours have passed since my viewing of Molly’s Theory of Relativity, and I’m still none the wiser nor satisfied by this movie. Seriously, if you’re going to have jumbled timelines, imaginary characters, totally nonsensical dialogue, and actions that do not befit the characters, at least make it mean something. Molly’s Theory of Relativity is, at least to me, 101 minutes of meandering wallowing in the search for personal guidance and wish fulfillment. The filmmakers want us to believe that it’s about more than it seems, but how can it be anything other than someone’s want to make something different and falling flat on its face? Each revelation of Molly’s leads us to further confusion while subjecting us to dialogue and situations that don’t matter one bit to anyone; the script runs endless circles around itself, making everything feel false and superficial.