Plimpton! Starring George Plimpton as Himself

If you’re at all like me, one of the first times you were ever exposed to the late George Plimpton was his brief scene in 1997’s Good Will Hunting, where he shares screen time with one of the men that would later win the Academy Award for writing it, Matt Damon. Damon, playing the titular Will Hunting, has been ordered by the Massachusetts court to undergo therapy as a condition of his release from prison; Plimpton plays Henry Lipkin, one of the psychologists that Hunting takes apart methodically, researching him before their therapy session and using what he knows about him to label him as a man who likes “putting from the rough” (i.e., gay). Lipkin’s reaction to this challenge is priceless, stuttering in disbelief at what he’s hearing and ultimately walking out on Hunting. It’s a memorable scene in a memorable movie, mostly due to Plimpton’s acting and Damon’s writing.

However, this only was the tip of the iceberg that was George Plimpton, and it doesn’t even get a mention in the new documentary film Plimpton! Starring George Plimpton as Himself, a movie which focuses on his finest achievements as a “participatory journalist.” Plimpton, in order to write about any kind of undertaking, would first experience said undertaking firsthand, be it as a football player, a trapeze artist, a hockey player, an actor, or whatever would strike his fancy. He lived his life through the lives of others, but never once vicariously; he put himself in situations in order to gain experience and knowledge, and the resulting articles or books were considered some of the greatest of his works.

Hailing from Manhattan’s Upper East Side, George Plimpton grew up the son of a lawyer and a writer; the film touches on his time as a school student and how he would go out for various extracurricular activities – sports, academic clubs, etc. – but not really be good enough to join the various teams. Still, though – it was the experience of having attempted something that stuck with him throughout the rest of his life. After helping co-found the literary periodical The Paris Review in 1953, he would interview prominent authors and artists for a series called “The Art of Fiction,” a mainstay of The Paris Review, which featured Q&A sessions with the likes of Ernest Hemingway, William Styron, and Kurt Vonnegut, among others. 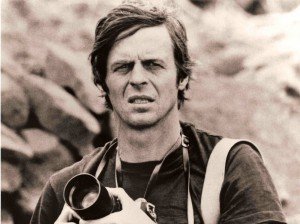 Eventually, as the film shows us, he starts delving into all walks of public life and writing about his brief stints in those various roles. His novel “Paper Lion” remains one of his most-known works, centering on his time as a rookie quarterback for the Detroit Lions. It is continually hailed as one of the best books about sports of any kind, and with Plimpton’s naturally disarming charisma, it’s easy to see why. Plimpton! Starring George Plimpton as Himself features interviews with his friends and family, and it also features voiceovers from Plimpton himself, culled from interviews, speeches, and even a witness deposition given after helping to wrestle Robert F. Kennedy’s assassin Sirhan Sirhan to the ground immediately after the shooting. (Don’t feel bad if you didn’t know that – even I was unaware of this until I watched this documentary).

Plimpton! Starring George Plimpton as Himself shows us the high points of Plimpton’s career as an everyman who loved telling his stories. Never once does it feel like anything other than a celebration of a life well-lived, with a good dose of inspiration to spare. As Dr. Frank-N-Furter once said in The Rocky Horror Picture Show, “Don’t dream it – be it.” George Plimpton was a man who dared to be, and his stories will live on for generations. No matter how silly they may be – the opening scenes of him preparing to participate in a high-flying trapeze act come to mind – they’re always informative and intriguing. So, too, is Plimpton! Starring George Plimpton as Himself, a documentary that extols the virtues of actually living life, not just observing it.