Posted by Michael Parsons on June 21, 2013 in Movie Reviews / No Comments

In “World War Z”, Brad Pitt plays a United Nations investigator who finds himself with the fate of the world in his hands. It’s a great film that falls just shy of its potential to be phenomenal, but hey – who would have thought that Max Brooks’ bestselling novel could’ve translated to the big screen in the first place? Unlike any zombie film I’ve seen and certainly closer in premise to “28 Days Later” and “Contagion” than to anything in George Romero’s canon, “Z” is full of big, beautiful aerial shots that capture an eerie sense of what things would look like in the midst of a global pandemic. 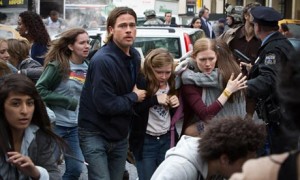 There’s a bizarre realism to this film, considering the subject matter,  because it focuses on the characters first, establishing a pattern of logic and depth of emotion before impressing us with big, loud special effects. In that regard, “World War Z” is every bit as relatable as a homegrown drama, an unusual trait for an action/adventure story (I hesitate to categorize it as horror, though I’m decidedly jaded), particularly one that isn’t afraid to use the word “zombie” regularly in the dialogue. But even when the film opens up to a massive scope, boasting effects that prove to be more immersive than gimmicky, it’s never too overwhelming, avoiding the busy camerawork that tends to weigh this type of film down; the narrative remains on a small-scale instead of spreading itself too thin.

“World War Z” follows Gerry Lane (Pitt), a devoted father who’s retired from his hazardous U.N. job to spend more time with his wife Karin (Mireille Enos) and two young daughters. When they’re forced to evacuate Philadelphia after all hell breaks loose, they find themselves in Newark, where they narrowly escape an attack to get airlifted off the roof of an apartment building. But it’s not without a price. 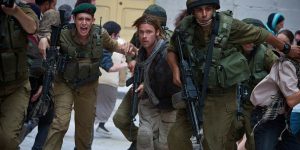 In order to secure his family’s safety on an aircraft carrier some 200 miles off the coast of New York, Gerry agrees to accompany a young doctor to South Korea where they believe the whole thing got started. After an unfortunate turn of events, he’s led to Jerusalem, where they’ve built a fortress to keep the infected out, and Gerry gets a hunch about a potential cure before narrowly escaping another onslaught of undead.

Though the film is certainly a spectacle (and the CGI quite impressive), it’s strongest in its most subtle moments. Director Marc Forster (“Quantum of Solace”) allows plenty of breathing room between action sequences, and one might become more concerned (as I did) about Gerry getting back to his family than saving the human race. And after the first half hour, their connection is conveyed with minimal contact; there’s a scene later in the film in which Gerry is flying at 30,000 feet and a mushroom cloud suddenly goes off in the distance, rocking the plane and disrupting his conversation with Karin on his satellite phone. It’s almost more upsetting than watching a whole city get overrun by the snarling, fast-moving zombies.

“World War Z” is an exciting, gorgeous, emotional movie that takes an upside-down approach to the typical blockbuster, whittling itself down to a rather interesting – and perhaps understated – conclusion, while the political, environmental and social commentary is so straightforward that it’s almost literal. Don’t bother seeing this one in 3D; the conversion was completely unnecessary and, if anything, darkens the picture (at least it did at my screening). This film is much more than I expected – if you’re hesitant to see a zombie flick, I assure you that Forster (very creatively) keeps the bloody aspects out of the picture almost entirely. Trust me, I was apprehensive about the PG-13 rating.