Posted by Eddie Pasa on February 23, 2018 in Movie Reviews / No Comments

… Be in bed by midnight’s bell…
… Never let a stranger through your door…
… Never leave each other all alone.

So goes the opening lullaby over The Lodger’s opening credits. Creepy and foreboding, the song warns of woe to those who break these rules, which we nearly see in the early goings as Rachel (Charlotte Vega) tempts fate by staying out until the clock chimes at midnight. Running through a darkened forest – well, it’s not exactly dark, ‘cause she’s able to read a book by a lake with no other light – to a large home which practically screams “I’M HAUNTED!”, she barely makes it to her room before a mysterious puddle of water starts forming at the bottom of the staircase. 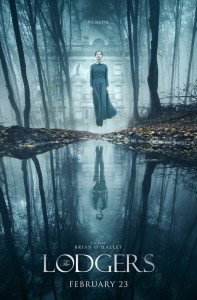 You see, Rachel’s half of a twin set, the other half being her brother Edward (Bill Milner), an agoraphobe fully under the bootheels of whatever presence holds them prisoner in their house. They cannot leave; they live only to placate whatever malevolence lives beneath their floors and pervades their waking moments by appearing as floating, naked corpses. And as the film starts on what’s implied to be their 18th birthday, they’re now of age and a prime target for whatever the spirits have lined up for them.

This atmosphere of dread and doom is what director Brian O’Malley exceeds smashingly at creating. Similar praise is directed at the acting, costuming, set design, and the effectively disorienting cinematography. However, this effort can’t shake the lacking screenplay, which (to its credit) tackles breaking a cycle of systematic abuse. While this theme is certainly valiant and to be commended, the script and direction quickly dismiss events and sights without giving any time to properly dwell upon them. 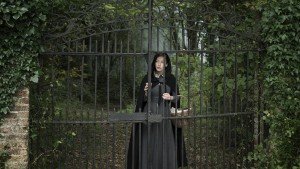 I rarely ever say this, but this 93-minute film could have stood to be a good five or seven minutes longer. Drawing out an attraction between Rachel and recently-returned soldier Sean (Eugene Simon) instead of going from a quick glance to near-copulation may well help us understand why Sean tries his damnedest to help Rachel out of her circumstance. Seeing more from Edward’s point of view – and not just the culmination of years of madness and fatigue – would have been appreciated, as I believe he was witnessing something different from what Rachel was experiencing.

But maybe that’s the point. Maybe we’re supposed to move through this film just like Rachel and Edward, never having any time to enjoy what’s around you for fear of the unknown coming to call. The Lodgers is like one of those roller coasters which starts off at 80 miles per hour and stays there, with no buildup or ebb and flow. We’re thrust into events we barely understand – but are made to understand through intimation, exposition, and the inevitable reveal of the house spirits’ true intentions – with everything and everyone being ancillary or a mere means to an end to the twins. 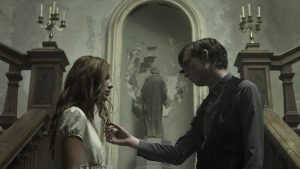 They’re also a representation of how there is no respite for Rachel from any kind of terror, whether it be in her home or the outside world. For instance, we encounter town ruffian Dessie (Moe Dunford), a man who takes what he wants when he wants. He forces Sean’s sister Kay (Roisin Murphy) into a sexual act (the equivalent of maybe second or third base, in case you’re wondering) before turning his lusty sights on Rachel, at one point threatening to rape her. When does all of this end for Rachel? She’s not safe in her home or outside, so where can she go?

Charlotte Vega gives Rachel a very interestingly ambiguous quality, desirable yet detached; she plays Rachel as if she’s hesitant to set foot anywhere decisively for fear of retribution from anyone or anything. She’s been living with her literal and figurative ghosts for so long, beholden to the past and doomed to the fates of those who came before her. So when she gets that little glimpse of hope from the mutual attraction between her and Sean, she’s caught between fully enjoying what it could be and trying to get as much out of him as possible before she resigns to her prophesied destiny. This is the metaphor with which this entire film is executed; there may not be a tomorrow for Rachel, so we’re sped through until she decides to take action for herself. 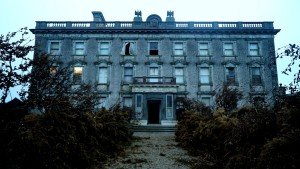 If you’ll notice, I haven’t mentioned Edward much, as The Lodgers seems to be more about Rachel’s journey into the light as opposed to Edward’s journey into the darkness. He’s already succumbed to the house’s spirits, just waiting to do what they want him to do and die afterwards. With a pallid, gaunt appearance, as if worn away from a lifetime of horror, and with a too-quiet voice, Bill Milner gives little life to Edward, which is very appropriate for the character. He’s not supposed to be alive; he’s a shell running on a basic subroutine. But has that subroutine been hijacked and programmed by the ghastly wraiths which have plagued the twins for most of their lives? With this maddening portrayal, Milner doesn’t ever let us know where Edward ends and the spirits begin.

I started this review with a lesser grade, thinking The Lodgers was undercooked. The rating has since been amended, as the film is not undercooked, but it’s of a different flavor than I was expecting. There is so much subtext and nuance to unpack, making this film impossible to shrug off upon first viewing. The Lodgers draws its horror from our childhood fears and the normalizing of abuse, leading to the question: is the real horror from within or without? And is the courage to break free from these shackles enough? The Lodgers is much more than a spook story; its ghosts are not merely malevolent spirits, but the spectral past commanding the present in order to take over the future.