A Wrinkle In Time

Posted by Eddie Pasa on March 8, 2018 in Movie Reviews / No Comments

Director Ava DuVernay’s adapation of Madeleine L’Engle’s A Wrinkle in Time can be likened to a Maypole. At its center is a very solid adventure featuring two loveable, precocious children looking for their father under the most adverse of circumstances. Everything else waving and fluttering around it is certainly eye-catching and engaging, but never feels like an integral part of the core itself. 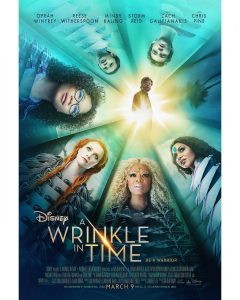 A Wrinkle in Time is full of fantastic and memorable ideas – one of the children’s guides turning into a majestic flying creature, an eerie world where children and parent alike behave robotically, among others – strung together with no cohesive flow or reason. Also, they’re all too quickly dismissed in order to keep the story marching forward. Somehow, an unintended side effect of this is losing its emotional rooting and connection to the audience, instead of using these sights to keep us attached and interested.

In trying to keep us grounded, the script by Jennifer Lee (writer and co-director of Frozen) chooses to spotlight young Meg Murry’s (Storm Reid) emotional and intellectual journey and growth. Originally seen as a bright, forward-thinking person in the early goings, a sadness has overtaken her after her father Alex (Chris Pine) disappears suddenly. She’s got a lot to deal with in other parts of her life – genius younger brother Charles Wallace (Deric McCabe), school bullies led by next door neighbor Veronica (Rowen Blanchard), and maturing into herself at that less-than-magical point where kids become teens.

This establishing slice of life shown to us at the film’s start provides a strong foundation for what’s to come. Meg deals with the pain of loss with a mask of a “just get it done” kind of attitude, with barely an acknowledgement of the life around her. Of course, when you’re her age and the last thing you want is your kid brother embarrassing you in front of all your school friends, wouldn’t you not want to acknowledge anything? It’s in these human moments where we adults truly (and somewhat woefully) appreciate what Meg’s going through. Not only have we been there, but we want her suffering to be eased, just as her mother Kate (Gugu Mbatha-Raw) so wearily does.

But the film goes sideways when Mrs. Whatsit (Reese Witherspoon), Mrs. Who (Mindy Kaling), and Mrs. Which (Oprah Winfrey) make their entrances. These ethereal strangers drop hints intimating they know more than they should about Alex, who’s imprisoned on the other side of the universe. With the three Misses guiding them, Meg, Charles Wallace (who’s always referred to as “Charles Wallace,” not simply “Charles” or some derivation thereof), and Meg’s suddenly-along-for-the-ride acquaintance Calvin (Levi Miller) make the impossible leap to where Alex was last seen, landing on a lush planet full of color and brightness, and here’s where the film starts to lose its traction.

We’re hopped along from destination to destination – one of them involving an out-of-nowhere Zach Galifianakis as a mystical seer – with nothing to grip. There is no tangible, hardy foothold on which we can find purchase; everything is almost in and out of our eyeballs, like a cinematic stream of consciousness which cannot – or dare not – stop. Once the three kids leave the Murry’s back yard, each new scene brings an entirely new set of rules and customs. It’s not hard to keep track of where the plot’s going, but the constant changes and the overuse of CGI gets a little tiresome.

For instance, we’re told Alex is being held on a planet of evil and darkness called Camazotz. Once we get there, we’re thrown into immediate peril as the ground beneath Meg and Calvin cracks and falls away, with a tornado whipping up out of nowhere. Seconds later, we’re in a neighborhood where all the children bounce dodgeballs in menacing unison. Seconds later, we’re on a beach with Red (Michael Peña) trying to lure Charles Wallace away like Pennywise the Dancing Clown and Georgie in the early scenes of It. 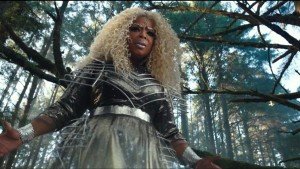 We’re given all these neat sideshows, but they ultimately have nothing to do with the main attraction. All of these fairly memorable characteristics of Camazotz are shouldered aside with no bearing on the eventual outcome. It would have been neat to see the creepy neighborhood kids tied into how Camazotz is a hive mind-collective, the way it does in the book; however, most symbolism and higher thought seems to have been eschewed for the readily-digestible and a lot of clichéd, pat, and easy viewing.

A Wrinkle In Time‘s motives and themes – especially those about familial love – hold true to the book, and almost heartbreakingly so. We’re shown that everyone – from bully Veronica to “big man on campus” Calvin to Charles Wallace to Meg – has their own difficulties in life, and that to fight them, there must be a modicum of understanding or love. And this is the most admirable quality about this film; it encourages its viewers to dare to do better by each other and ourselves. That’s a part of this film’s core which can’t be buried under CGI gewgawgery, and it’s a welcome sight in today’s “me first” society.