Posted by Eddie Pasa on June 9, 2016 in Movie Reviews / No Comments

When The Conjuring was released in 2013, I marveled at its daring step backwards to a time where scares were paramount, relying on mood, tension, and fear instead of the blood, guts, and crappy acting found in other contemporary horror movies. Director James Wan – who cut his horror teeth on the original Saw (which I maintain is one of the greatest exercises in tension ever made), Dead Silence, and Insidious – has a terrific knack for storytelling and scares, with The Conjuring being one of his best achievements. He brings it all back for The Conjuring 2, once again dipping into the files of paranormal investigators Ed and Lorraine Warren for another story sure to cause our teeth to grind and eyes to slam shut in abject terror. 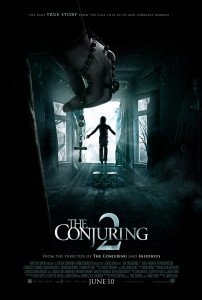 For the most part, Wan succeeds in replicating the successes of The Conjuring, which is exactly what I expected when it comes to this franchise. I say “for the most part” because he replicates it a little too well, almost matching The Conjuring beat-for-beat and making the unexpected a formula. Does it still work? Yes, thanks to the thrilling subject matter and worthy performances from all on either side of the camera. Don’t mistake “formula” for “boring,” though – The Conjuring 2 settles for nothing less than the dread and unsettling terror established in the first film. All Wan and company seem to have done was switch locales from Rhode Island to the London borough of Enfield and train their cameras on another family in emotional upheaval.

Peggy Hodgson (Frances O’Connor) has been recently dumped by her husband (the circumstances of which lend one of the film’s few laughs), who hasn’t bothered to pay child support for their four children, who all live with Peggy in a run-down public housing estate. Older sister Margaret (Lauren Esposito) defends younger brother Billy (Benjamin Haigh) from bullies making fun of his stutter, while preteen Janet (Madison Wolfe) is seen playing with a homemade Ouija-type spirit board and mistakenly getting in trouble for smoking at school. The joy has utterly run out of their lives, which is when a malevolent spirit decides to start playing tricks on Janet, eventually driving her mad. 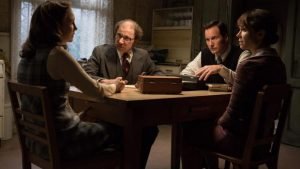 There’s a little bit of a loss of urgency, however, and that’s mostly due to the is-it-or-isn’t-it-a-hoax nature of the film. Whereas both Ed (Patrick Wilson) and Lorraine (Vera Farmiga) witnessed firsthand the paranormal activity of the first film, they come into this story rather late and with potential bias towards debunking the haunting. Even Anita Gregory (Franka Potente), a member of the Society for Psychical Research is on hand to sow the seeds of doubt. And why shouldn’t we doubt? Wan keeps what Janet sees out of the view of any other member of the Hodgson family and the investigators, and even though the Warrens desperately want to believe and help this family, they’re not given much to go on with this outing.

Even the scene showing what should have been a very pivotal point – where Ed talks one-on-one with the spirit – is couched in a shadow of doubt, although it’s one of the film’s most exciting sequences and befitting of the long unbroken take Wan gives it. Yet for all the doubt, more than enough is shown through Janet’s eyes to make us want to crawl into the seat of the person sitting next to us, even if we don’t know them. Balancing our misgivings with visions of what may (or may not) be going on with Janet is an interesting choice, and we find both cast and crew fully committed to the ambiguous nature of the film. 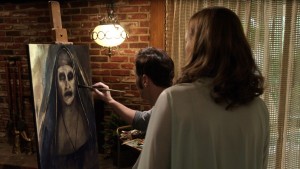 The Conjuring was a successful blueprint as to how to terrorize audiences without the gore by showing a more human side and fully fleshing out their characters, earning its R-rating by being simply too intense and scary for a PG-13 rating. Its sequel follows the blueprint almost to the letter, again earning an R-rating with barely any sight of blood or use of foul language. However, one can’t help but notice how similar it is to its predecessor by being an almost note-perfect cover of the original. The yellow typewriter font used for the opening and closing text; how much of the time we spend with the victims before the Warrens get involved; the kinds of scares – someone getting dragged into a room on her own, someone whispering “There’s someone in the room!” before things go kafluey – Wan chooses to use; and the final shot all seem to scream “FORMULA!”, even though we feel like it’s a different ride and purpose altogether.

But if it’s a formula, who’s to deride it if it works? Wan and company make it work well, layering the film with tension and utter madness before its inevitable showdown between the forces of good and evil. Unlike the diminishing returns of every Paranormal Activity sequel, The Conjuring 2 has found a way to stay fresh and frightening, throwing their actors into hair-raising situations and grabbing scream-worthy performances out of all of them. Keep your eyes open, no matter how much you might want to shut them out of fear; you might see some hints in the early goings as to how the mystery might be solved (NOTE: pay close attention to the decor in the Warren home). Don’t worry about the formula; just enjoy being scared for 133 minutes.