Posted by Eddie Pasa on June 9, 2016 in Movie Reviews / No Comments

Friends of mine know I’m a sucker for magic; from even the simplest matchstick party gags to the most complex setups seen on Vegas stages, I appreciate good sleight-of-hand and misdirection. (You could probably correlate this with my film reviewing capabilities, but let’s be civil and not go there.) My first reaction to 2013’s magic-central Now You See Me was one of contentment and excitement – I’d seen it while on vacation with my family and adored its spark. There was a freshness and effervescence brought with its mix of new talent and seasoned pros, along with snappy dialogue and urgent – not frenetic – photography and direction. This was a movie that, like a good magic trick, took its time and had its way with you, leaving your mouth agape at the final reveal. 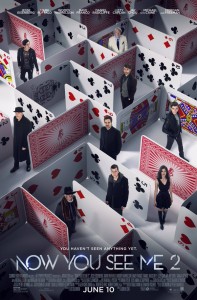 It’s a little less so with its sequel, Now You See Me 2. Whereas the first film devoted itself to strictly action and chases, Now You See Me 2 sees The Four Horsemen get real. Egos and pride are at stake, and the resulting drama director Jon M. Chu and writer Ed Solomon (without the help of his Now You See Me co-writers, Boaz Yakin and Edward Ricourt) wish the audience would appreciate makes it feel less magical and more of a chore. Gone is the lighthearted feel of the high-flying original; now, we’re almost immediately saddled with interpersonal politics and backbiting as we once again ride alongside The Four Horsemen.

Well, make that Three Horsemen. Escape artist Henley Reeves (Isla Fisher, not appearing in this movie) has chosen to take her leave, leaving illusionist J. Daniel “Danny” Atlas (Jesse Eisenberg), mentalist Merritt McKinney (Woody Harrelson), master thief Jack Wilder (Dave Franco), and group leader/FBI inside man Dylan Rhodes (Mark Ruffalo) without the necessary fourth stage member. The film opens with Danny protesting his superiority over Dylan’s lack of leadership in the year since they destroyed the lives and livelihoods of insurance magnate Arthur Tressler (Michael Caine) and magic debunker Thaddeus Bradley (Morgan Freeman). Hungry for their next stunt and to once again serve the public in their own special way, Danny complains to The Eye – the organization responsible for the Horsemen’s financial and material backing – and is told to be patient, for he will eventually replace Dylan as their leader. 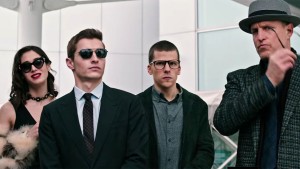 Throughout the entire film, we have to deal with Danny and his arrogance, which Eisenberg plays up with no limit. Whiny, sullen, and unwilling to work as a team player, Danny skulks through the film as the pretender to the throne, an act which wears thin the further the movie drags on. Drags, you say? Yes. Solomon’s script has The Four Horsemen – made whole with eponymous costume and gag expert Lula (Lizzy Caplan) – and Dylan constantly sniping at each other, with Lula’s dry sarcasm tending to more rile tensions up than to defuse them. Just when you think they’re over the previous spat, here comes another problem or bump in the road to jar them right back to where they were five minutes ago, arguing and being petty.

Also, the film makes attempts at being emotional through a subplot concerning Dylan’s father, the late Lionel Shrike (recast with Richard Laing in Elias Koteas’ place), with Dylan being probed and prodded by Thaddeus about what his father meant to him. This opens up all sorts of possibilities in the film, especially the cop-out epilogue and the all-too convenient help the Horsemen receive in getting the job done. It’s as if Solomon and Chu weren’t confident in the audience taking leaps of faith, instead laying everything bare and not leaving anything to our imaginations. It’s a little too pat, a little too handy; I expected the sequel keeping at least the same level of excitement as the original, but by dumbing everything down, the film definitely loses more than a few steps. 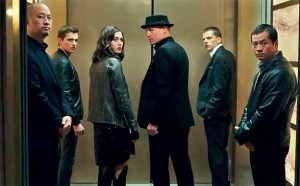 Now You See Me 2 takes its predictable twists and turns amid eye-popping and nail-biting action, which – let’s face it – is the reason you’re going to pay your admission fee. There’s a five-minute sequence involving card-flipping which must be seen to be believed, even if it is computer-enhanced – the choreography and blocking of this entire scene is spectacular. Likewise, The Four Horsemen’s grand finale is something to behold, but there’s a certain je ne sais quoi missing from this scene – and a lot of what goes on in Now You See Me 2, even the action scenes. Chalk it up to less time given to showmanship and the tricks themselves, and more time given to their personalities and egos. I mean, I can’t even remember what the point of Lula’s act is in the final scene, but I do remember she talked an awful lot instead of actually doing anything.

Of course, none of their egos hold a candle to the film’s central figure, a tech genius named Walter Mabry (Daniel Radcliffe) who also happens to be a British expatriate living in a palatial loft in Macau, China. Strutting his stuff like the peacock he thinks he is, Walter slides into the Horsemen’s sights by disrupting their latest attempt at Robin Hoodery – exposing a cell phone maker to the public as a privacy-destroying imbecile – and blackmailing the Horsemen into carrying out a heist Walter needs done. It’s going to take the Horsemen working at 100% and as a unit to not just complete their task, but to crawl out from under Walter’s thumb and get back to working in secret. 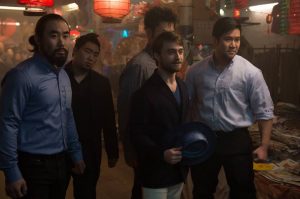 If the plot sounds familiar – a vaunted heist gang has a job interrupted and is basically forced to dance to someone else’s tune for fear of being either turned into the authorities or, worse, killed – you’re right. Now You See Me 2 comes off as a sort-of millennial version of the misunderstood, underappreciated Ocean’s Twelve, except without the cast looking like they’re having fun flitting around Europe. To be sure, you can still tell there was fun had, and it’s not altogether a bad film. Now You See Me 2 suffers from going in the same direction as an established film franchise and having no creative spark. If there’s another Now You See Me film which involves one of the Horsemen being badly injured and the remaining members banding together to take merciless revenge, I’ll consider it a fully lost opportunity to do something fresh.