There’s some great writing in the new Judd Apatow film “Trainwreck” courtesy of Amy Schumer, who also plays the promiscuous, over-imbibing gal to which the title refers, but there’s also a lot of what I can only describe as “run-on” comedy — that is, when a scene just doesn’t know when to quit. This is a two-plus hour film that would have been a hell of a lot better at 100 minutes, but again it feels like a product that somehow missed its stop at the editing room. (For example: there are only so many ways that WWE star John Cena can bungle dirty talk in bed before it just starts to feel like a series of outtakes). 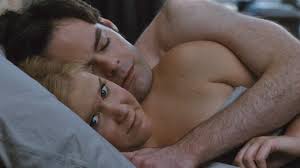 Swinton) pushes lowbrow pieces like “Ugliest Celebrity Kids Under 6” and has little patience for her employees’ personal problems. A product of her upbringing and the parting words of her adulterous father (Colin Quinn), Amy has one night stands down to a science, while closest-thing-to-a-boyfriend Cena laments her proclivities and eventually walks away (to his credit, the character is likable and believably sensitive).

When she finds herself falling for renowned sports doctor Aaron (Bill Hader) after being assigned to write an article on him, Amy seems hellbent on sabotaging the burgeoning relationship by sticking to dad’s credo that “monogamy isn’t realistic”. This is delivered in the film’s opening scene (also one of its funniest), in which Quinn explains his departure by asking his (at the time) 5 and 9-year-old daughters if they’d be happy if they could only play with one doll for the rest of their lives.

But Aaron, who splits his time between surgeries on famous athletes and the Doctors Without Borders program, is steadfast in his commitment to making it work with Amy, unafraid to tell her how he feels. This is so utterly foreign to her that she’s perplexed when he calls her the day after their first night together (“What the hell is wrong with him???” she asks a co-worker, concerned).

This film is an improvement over Apatow’s last flick, the ho-hum “This is 40”, which is probably more notable for its epic length than anything else. Ultimately, “Trainwreck” evolves from a rather languorous first act, which feels more like a hodgepodge of shoot-from-the-hip sketch comedy bits than anything else, into a surprisingly deep, fitfully funny and occasionally moving story about relationships, loss and redemption. Pacing remains an issue, but at least the movie has heart.

Highlights of the film include LeBron James in a substantial role as Hader’s best friend and moral support, and Brie Larson as Schumer’s younger sister Kim, who, married with a kid and another on the way, didn’t take to their father’s advice like Amy.

“Trainwreck” also proves that Schumer, best known for her irreverent show “Inside Amy Schumer” on Comedy Central, can really act. Paired with Hader, who had a stunning dramatic turn in last year’s “The Skeleton Twins”, the chemistry is palpable, and their dynamic vacillates between funny and realistic pretty seamlessly.

If only Apatow would dial back on the meandering improvisational bits, this film would have been a whole lot funnier. As it is, “Trainwreck” feels like a few great talents starring in a movie that is fairly stock for adult comedy in the new millennium.