Boulevard features the dubious honor of being the last film released with a live-action performance by the late Robin Williams. (His last filmed performance was seen in last year’s Night at the Museum: Secret of the Tomb, followed by a voice-only performance in the upcoming Absolutely Anything.) I say “dubious” because even giving one of his most unguarded and truthful performances can’t save Boulevard from being merely ho-hum, which isn’t what I expected when this film is the equivalent of a bomb exploding; the other characters are merely minimal casualties of its effects. 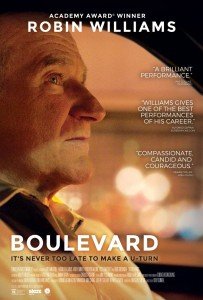 Williams leaves us with a searing, lasting portrayal of a man caught in a lifelong lie when jarring circumstances shake him loose of his moorings. His character, Nolan Mack seems to lead a smooth life – he’s got a longtime, steady job at a local bank, a Mercedes-Benz, a supportive wife named Joy (Kathy Baker), and the two-story in suburbia. However, the façade seems to be crumbling; his father lies in a barely-responsive state in a local nursing home, his wife wants to go on a cruise (Nolan abhors the idea) after hearing his best friend Winston (Bob Odenkirk) talk about his experiences, and his boss at the bank has suggested him for a promotion after being a low-level worker at the same branch for 20-some-odd years.

That’s a lot of pressure, even for someone not hiding a secret like Nolan’s been hiding his entire life, which finally manifests itself in a chance encounter with Leo (Roberto Aguire), a street hustler whom Nolan nearly hits with his car while on a stroll. Knowing full well what Leo represents to him, Nolan begins a near-nightly (albeit non-sexual) relationship with Leo, who turns out to be the spark so sorely needed in Nolan’s life. It’s a humdrum existence, as Nolan shuttles from work to nursing home to his own separate room apart from Joy, lacking so much of the intimacy and intensity he craves. He’s been stuck in this lie, this moribund existence for almost his entire life, and with Leo, he’s finally got a shot at true happiness, or so it seems. 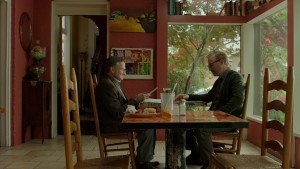 Nolan’s been flying under the radar for years, either keeping others at a safe distance and living according to the supposed “standard.” Much like the film Beginners, Boulevard shows you the emergence from a self-imposed chrysalis of man who’s had enough of his repressed homosexuality. Yet the film’s script, as written by Doug Boesbe, takes us to fantastical places almost too contrived and soap-opera for this kind of subject matter and for these kinds of circumstances. Then again, Nolan’s never been able to fully express these desires, so what choice does he have other than to fall into trumped-up drama? Boesbe fills his screenplay with ill-covered lies, a stereotypical white trash pimp (Giles Matthey), and a coming to terms that appears to be flung out of nowhere to quickly tie the story up and move along.

Ben Gibbard of the band Death Cab For Cutie writes in his song “Crooked Streets”: “I’m a war of head versus heart, and it’s always this way / My head is weak, my heart always speaks before I know what it will say.” While we don’t exactly see “war” in Nolan, we do see Williams playing it as a man long buried in the dirt who’s finally clawing his way to the light. Dito Montiel takes great care in making sure that Nolan is the most sympathetic character in Boulevard, leveling up Nolan’s excitement levels – and the mistakes he makes – as the film progresses. Joy wants so badly for her relationship with Nolan to work, she’s willing to accept these accumulating errors, almost wanting to extend her own lie that she’s living as well. 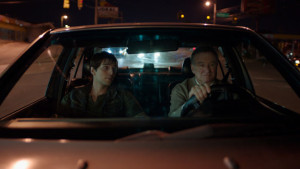 Which brings us to Leo, the hustler who’s stolen Nolan’s heart. Throughout the film, he seems to represent cold reality; unable to give Nolan the intimacy he wants, he’s perfectly fine with giving him sex (which never occurs), as that’s his role. He knows what part he plays in the grand scheme of things, and although he tries to give something back to Nolan, he quickly reverts to the straightforward nature of the service he provides. While everyone else walks around enshrouded in some kind of lie, there’s nothing that Leo does outside of his character, which makes him the most honest person in the picture.

Taken apart, Boulevard works on so many depths and levels; taken as a whole, those levels aren’t cohesive with each other, which is its major downfall. Boulevard is about the lies we tell ourselves to make our lives work and what happens when one person stops lying. The world does, indeed, crumble; hearts are broken; viewpoints are irrevocably changed; yet life continues. Melodrama and artificial action feel unnecessary when someone decides to be who they truly are, no matter what age, as this kind of upheaval contains enough drama to last more than the 88 minutes we have here. The full brunt of the emotional conflict isn’t brought to bear upon the right characters; instead, we have parking lot fisticuffs between Nolan and a horrible pimp who sounds like T-Bag from the television show “Prison Break.” Left alone and given room to grow organically, Nolan’s journey in Boulevard could have been so much more, had the filmmakers not forced it to be something it shouldn’t have been.