I can almost hear the song “Pac-Man Fever” as I write this: “I got Pac-Man Fever… it’s drivin’ me crazy!” (And if you want to hear it, too, click here.) This 1982 song by Buckner & Garcia and a tune about “Space Invaders” my eldest sister and her friend wrote and recorded on a cheap radio/tape player in response to “Pac-Man Fever” are what went through my head when I saw the trailer for Pixels. Life-size versions of my favorite childhood Atari and arcade video games are seen terrorizing the world’s populace, most notably Pac-Man; being a video game junkie from the way back (not so much in recent times), I instantly realized I’m at the point in life where Hollywood’s version of nostalgia is going to rip straight from my own youth. Guardians of the Galaxy had early ‘80s and late ‘70s songs scattered throughout; films like Friday the 13th, A Nightmare on Elm Street and other ‘80s films are getting remade; obviously, the next step would be video games, right? My only hope for Pixels was to see Adam Sandler not sully the video games by filling the movie with the kind of humor we’ve been seeing in his past few films. 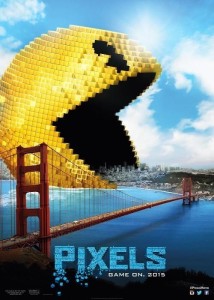 Well, consider my one hope fulfilled; aside from one pee joke (and it’s kinda cute), Pixels stays far away from the potty humor and keeps it relatively clean. Do we have Harry Potter and the Sorcerer’s Stone director Chris Columbus to thank for this? Maybe, but the result is a curiously bland film, with not many laughs as you’d expect (although there are some hearty, well-earned guffaws) and passable action sequences, with the typical Sandler shenanigans sidelined in favor of his version of “maturity.” Pixels doesn’t stray too far from the usual “Adam Sandler movie” formula, but enough of a twist is put on each character so you’re not quite sure where they’re going, lending the film a bit of a confusing unpredictability. This effort to change up styles makes me applaud the film, but it also makes me scratch my head at the undefinable quality of these people. Here, we have a film where Kevin James – yes, Paul Blart Mall Cop himself – plays the President of the United States, yet is neither smart enough nor dumb enough to really strike any kind of consistent tone and connect one way or the other with the audience.

That same middle of the road is shared by Adam Sandler’s Sam Brenner, a computer/home electronics installer/repairman (think Best Buy’s Geek Squad) and former child video game whiz. Fearing excelling at anything since losing a pivotal “Donkey Kong” game in a 1982 competition to Eddie “The Fire Blaster” Plant (Peter Dinklage), he lives a dull and stultifying existence, especially since his childhood best friend Will Cooper – whose talents lay elsewhere in the arcade – grew up to be President, with whom Brenner still shares beers and laughs. Throughout the film, Sandler underplays Brenner, almost walking through the film with little purpose other than to get to the next scene. It’s not a particularly exciting or energizing performance, and aside from one throwback to Happy Gilmore, you don’t see any of the familiar Sandlerisms. However, his character’s definitely not annoying or stupid, so at least he’s got that going for him. 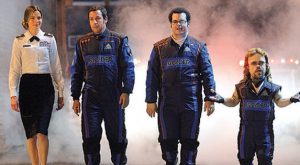 So why does their connection still matter? Because an alien attack on a US military base in Guam reveals similar patterns to those Brenner saw in his boyhood video games; recognizing those patterns enabled him to excel at these games as a child. Much to the chagrin of Cooper’s military advisor Admiral Porter (Brian Cox) and Lieutenant Colonel Violet Van Patten (Michelle Monaghan), Brenner – along with former childhood acquaintance Ludlow Lamonsoff (Josh Gad), the stereotypical “guy who lives in his mother’s basement and obsesses over video games and conspiracy theories” – has to train Army personnel to beat these aliens, eventually taking the lead and allowing himself to regain his confidence.

I mean, this sounds so good on paper, and it looks pretty decent on-screen. An alien intelligence has intercepted images of people playing video games and misinterpreted them as a declaration of war; they come to Earth using those video games (and the games’ tactics) on us, turning everything they destroy into a big pile of – you guessed it – pixels. It’s a video game version of what happens to the Voyager probe in Star Trek: The Motion Picture. The short film upon which Pixels is based shows a simpler version of what we find in its big-screen offshoot, but Columbus’ adaptation just kind of hangs there, not being funny enough to be called a comedy and not being action-packed enough to fit into the action genre. Make no mistake, though: “middle of the road,” which this movie is, is not the same as “mediocre,” which it isn’t. Pixels is entertaining, but a far cry from “excellent” or “classic.”

Obviously going for the family demographic, there’s very little offensive material here, but we’re not exactly in G-rated Disney territory, either; there are a few jokes straight out of the Sandler playbook, yet they’re saved for the other characters. Dinklage gets the best of them, clearly playing off both his “Game of Thrones” persona and his dwarfism by being the biggest strutting peacock (heavy emphasis on that last syllable, if you please) in the film, too eager to overcompensate for his – ahem – shortcomings as a person and as a gamer. His redemption and the reason he needs it play into what made Brenner into the sadsack he is, and it’s one of the main themes of the film.

Josh Gad’s Lamonsoff is plainly meant to skewer the keyboard cowboys of late who have no idea how to interact with people in the real world, yet hide behind their computers in the relative anonymity of the internet and hurl invectives to mask their loneliness. Gad plays him well, being one of the most exciting characters in the film to watch. He shifts from a guy living in his own head and overly attached to an unattainably beautiful female character in a video game to a fast-driving, weapon-firing hero throughout the film, and his transformation is fairly sweet to watch, but we’re only given barely enough of him; it’s as if even the filmmakers knew he was going to get tiresome if left onscreen too long.

For all the flak Sandler has gotten over the last few years for his one-note portrayals of immature, arrested development-type loser males, he at least tries to show us a different take on a guy stuck in a dead end job who has to rise to an ultimate challenge. However, even he must take a backseat to this film’s true star: nostalgia. Those of us who always wished to see a real-life “Galaga” attack or what “Centipede” would look like if it were to be played right over our heads finally get our wish, courtesy of some dazzling CGI work that, due to its very nature and character, fits right into the movie and snags the lead right out from under the human characters. The best bits of the movie – the large-scale versions of beloved video games – are more than enough to warrant a viewing of this film, but don’t be surprised if the rest of it leaves you feeling like the machine ate your quarter.