Posted by Eddie Pasa on July 9, 2015 in Movie Reviews / No Comments

There are so many layers to Tarsem Singh’s Self/Less to start simply with an offhand remark about how many influences Singh has incorporated into it. Granted, at first look, Self/Less plays like a mix of John Frankenheimer’s Seconds, Robert S. Fiveson’s Parts: The Clonus Horror (unofficially remade as The Island by Michael Bay), Rian Johnson’s Looper, David Mamet’s The Spanish Prisoner, Geoff Murphy’s Freejack, Paul Verhoeven’s RoboCop, and quite a few other suspense and science-fiction films. However, there’s enough social commentary in the film to supersede its homage or pastiche, which makes Self/Less its own animal without feeling like it’s excessively borrowing from the aforementioned films, whether intentionally or unintentionally. 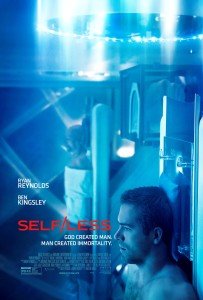 All of the above films deal with someone being on the run after some type of reality-altering event, often being hunted by the very people the protagonist accepted as friends or, at the very least, co-workers. Freejack and RoboCop deal with someone whose consciousness is transported into a younger body as a means of some kind of immortality, and that’s where we find ourselves with Self/Less. It’s also a bit of a David Cronenberg-esque statement upon how the wealthy take advantage of the poor and the price only the wealthy can afford to pay to live forever.

Suffering from cancer and given weeks to live, richer-than-Croesus real estate tycoon Damian Hale (Ben Kingsley) is mysteriously given a card for Phoenix Biogenic, an aptly-named company specializing in a process called “shedding.” Shedding is exactly what you think it might entail: letting go of the physical self and transplanting one’s consciousness into a new body. Phoenix, indeed. Spearheaded by Dr. Albright (Matthew Goode), Phoenix promises lab-grown bodies, free of defects and disease. Damian chooses to undergo the procedure, dying looking like Ben Kingsley and waking up looking like Ryan Reynolds. 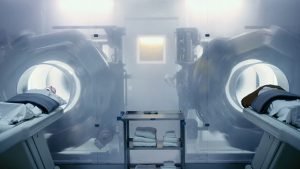 Walking the streets as an internet millionaire named Edward Kitner, Damian enjoys the young life as he runs around in shiny sports cars, lives in a palatial New Orleans estate, has his way with beautiful women, and plays basketball with his friend Anton (Derek Luke). Here’s where an unexpected lesson in both personal and business ethics starts: although Damian’s been promised that the body he’s in was grown in a lab, he starts to have visions of a family, of war, and of a life he never once knew. It comes to light that instead of getting a factory-new model like he was promised, Damian’s new ride is more of the “previously owned” variety, and Dr. Albright may not be the cool, in-control person we think him to be.

Self/Less is a fast-paced, elegant film with so many moral ramifications that it could have easily sunk under the weight of its own preachiness. Instead, Singh chooses to keep the proceedings moving forward and leaves the questions for you to chew on after you leave the theater. It’s heavy, but it’s not so heavy that you forget to accept what’s being thrown at you. Singh disorients us with flashbacks and flashforwards intertwined with the present running timeline, almost hoping to land you in as much of a state of confusion as Damian finds himself in after being given a new body. 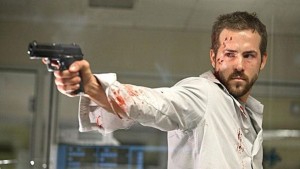 Known for his cerebral films The Cell and The Fall, Singh combines realistic, grounded action with a grand science-fiction premise, making a slick, great-looking film which won’t make you stop thinking once you leave the theater. It’s his most visually straightforward film to date, keeping mostly to real physics and inhabiting real-world spaces, from gold-laden apartments to simple country houses. Ryan Reynolds puts forth a finely nuanced performance as the young Damian, reveling in his youth, only to be later haunted by his choices and what effects his money had on people – like the family belonging to the body he’s now occupying.

Even though Self/Less wears its influences on its sleeve, it’s a mighty fine mix of them, and yet none of them. The script, written by brothers David and Àlex Pastor, gives us enough exposure without overdoing any single character moment and lets Singh’s visuals speak for themselves. Fewer perfect endings achieve what this film gives us in its denouement, and it’s exactly what this film and its characters deserve. How we get there is quite an adventure, full of twists and heart, all anchored by a terrific central performance by Reynolds. Self/Less is half morality lesson, half chase film, and all enjoyable.