The Despicable Me franchise is as old as my eldest child, both having been brought into the world in 2010; she discovered the first Despicable Me around the time her sister was born, thus introducing me to Felonius Gru (Steve Carell) and his lovable, outrageous minions. Or is it Minions, with a capital M? No one’s quite sure what they are or where they’re from, considering that they speak an odd combination of Spanish, French, English, Tagalog, Chinese, Japanese, Korean, Italian, Portuguese, and other world languages I couldn’t recognize. They’ve spent their whole lives in the company of different villains the world over, from the largest prehistoric fish to a nasty bank robber, eventually ending up in Gru’s service; an assumption would be that their language has evolved after spending time in different cultures, but that’s just my guess. 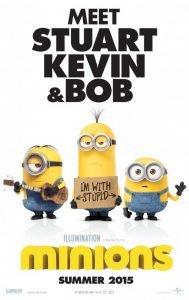 The Minions (I’m going to go with a capital M from here on out) proved themselves to be almost more popular than the main characters of Despicable Me and its sequel. Now, they have their own movie, Minions, which shows them evolving into their modern-day selves from being plankton-like, protozoan sea creatures who quickly learn to follow any beast – animal or man – who will protect them and (more importantly) not eat them. After being exiled to a snowy wasteland following a tragic wartime mishap, the adventurous trio of Kevin, Stuart, and Bob (voiced by co-director Pierre Coffin) try to bring their mischievous clan back to civilization to serve the grandest evildoer on the villain food chain.

Minions does well in explaining this in the opening minutes, generating large laughs from everyone in the audience: kids who enjoy the silly antics onscreen, and adults who appreciate history and the insertion of the Minions in some unexpected situations. The Minions have been involved in with some unsavory characters – Dracula and Napoleon Bonaparte being two of many examples shown – and all they do is live to serve them. They do so willingly, throwing their lives into their work and being blithely joyful about it, regardless of the consequences of said joy. I mean, baking a birthday cake for Dracula’s all well and good, but do they have to serve it in the morning and draw the curtains back when the sun’s shining?

It’s a combination of that playful ignorance and – oddly enough – surprising smarts that endears us to the three lead Minions, and that’s also how they find themselves in the service of Scarlet Overkill (Sandra Bullock), the world’s first female supervillain. Having stolen everything from gold to an Andy Warhol painting to Jimi Hendrix’s red Fender Stratocaster guitar, she and her hepcat husband Herb (Jon Hamm) need the Minions to get the one thing she’s always wanted since she was a child: Queen Elizabeth II’s royal crown. Nothing’s going to get in her way, especially with Herb’s technological inventions (a hypnotic hat and a lava gun being among them) and with the Minions’ blundering ability to get a job done.

As we expect from a film titled Minions and starring them, there’s a lot of pratfalling, that lucky sort of “doing the wrong thing at precisely the right time” shenanigans, and a LOT of the Minions’ gibberish. Part of the fun is listening for words you may recognize from other languages, and the other part of the fun is enjoying the hyper-fast, 331/3 rpm record on 45 rpm, rapid-fire speech patterns. The animation is stunning, making me question more than a few times if they weren’t using a combination of live-action footage and animation. Finally, the soundtrack is one of the finest collections of pop songs in any movie, coming from the likes of The Beatles, Donovan, and The Turtles – this being a film set in 1968, how could you not have some of that era’s great music in it? I wouldn’t be surprised if half the film’s budget was spent on obtaining the rights to use these songs. The use of The Who’s “My Generation” during a scene where the Minions are playing around and through Buckingham Palace is at once extremely fitting and subversive, and it also defines what I find a little wrong with the movie. 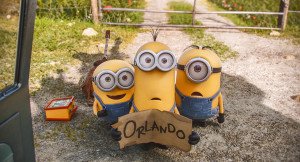 In the Despicable Me films, the Minions are disposable, near-throwaway characters whose purpose is to provide physical comedy, sight gags, and to set a scene by the tones of their voices. This being their movie, they’re onscreen for more than 98% of the time, and we’re given three lead Minions to give our focus. Yet the movie never feels like it knows who it’s talking to, as if they were trying on several different voices at any given time and seeing which one would speak greater volumes. Is this film a children’s film, or is it something posing as a children’s film but tailored for the adults who have to bring their kids to the movie theaters? The jokes are very adult-oriented (they’re not “adult jokes” or anything that doesn’t belong in a kid’s movie, don’t worry) and the setting and music speak more to adult sensibilities than children’s. Also, while the goofball antics entertain, it’s not a particularly laugh-out-loud movie; it’s more of a fast-paced action film with humorous intentions.

Also, what is it with villains these days in films being merely borderline evil? Sandra Bullock’s Scarlet Overkill is played up as being a sexy woman who wants to take over the world, but in actuality, she’s just a girl who wants all of the toys. Tomorrowland had a similar problem, its villain being no more than a apathetic man who merely chooses not to intervene and halt the decay of humanity on Earth. Avengers: Age of Ultron’s villain was exactly the same, a computer program who sees humanity’s eradication as the only way that real progress can begin. Minions’ Overkill doesn’t reach “memorable villain” status and seems to be only a foil for the Minions’ monkey business, at least until they meet Gru. 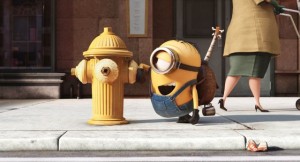 Minions is a film that almost seems unsure of itself, as if there’s some hesitation in relying solely on these Nuprin tablets (do you remember the ads for this pain reliever? “Little. Yellow. Different”) to carry a film on their own. It’s not empty and devoid of purpose, considering the strong themes of loyalty and friendship, but it feels like someone’s stepping on the gas pedal and not letting off until the credits roll. There’s no room to breathe, with every second containing some kind of gag or hasty character moment, thus making the climax of the film feel like a total non-event. At least they’ve thrown enough in there to keep the kids happy and your eyes moving, and the 3D’s not so bad, either. Oh, and here’s a hint: if you stick around for the music credits and you see “Revolution” by The Beatles credited when you hadn’t heard it at all during the movie… that probably means you should stay in your seat.