“Big things come in small packages.”
As a short person, I’ve been hearing this maxim my entire life. From friends who tried to make me feel better about not being tall enough to ride roller coasters at Kings Dominion; from teachers who tried to tell me height does not dictate ability; and from pretty much any girl who thought she was being nice to me by using this line to turn me down for a date or a phone number exchange. Yup, it’s not a whole lot of fun when people use your head for an arm rest. But now, out of the Marvel film factory comes Ant-Man! A film which celebrates being small! Well, not small, like 5-foot-3 small – we’re talking micro, like… ant-sized. 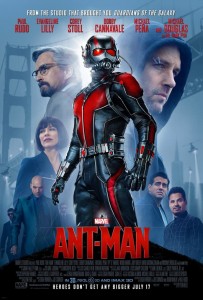 The twelfth film in the 7-year existence of the Marvel Cinematic Universe (MCU), Ant-Man has the honor of repeating the irreverence and the charm of last year’s MCU hit, Guardians of the Galaxy, which it quite handily does. It also tends to follow a lot of the same beats as Guardians, with a rogue thief being manipulated into a situation which guarantees he’ll become the lovable hero by film’s end. Maybe the MCU is getting too comfortable with itself and relying on past glories to stimulate its future. In an interview with BuzzFeed, Evangeline Lilly, who plays Hope Van Dyne in Ant-Man, said of the MCU: “I mean, they’ve established a universe, and everyone has come to expect a certain aesthetic [and] a certain feel for Marvel films.”

That said, Ant-Man fits in perfectly with the eleven preceding films, with director Peyton Reed ably taking the reins for this wild, rousing go-round. Most of the film is going to get by on the likeability of Paul Rudd, who affably plays Scott Lang, an electrical engineer-turned-convict jailed for stealing money from a corrupt business and redistributing it to the victims, which plays into the metaphor for the little guy being crushed under big business’ feet. This metaphor is hammered into us by not just this instance, but also by Dr. Hank Pym (Michael Douglas) trying to keep secret his research and development of the Pym Particle serum, capable of miniaturizing and reversing said miniaturizing. However, an early scene shows us how S.H.I.E.L.D. wanted it as far back as the 1980s for weaponization, which Pym protested by resigning; in the present day, after initiating a hostile takeover of Pym Technologies and renaming it Cross Tech, Pym’s protégé Darren Cross (Corey Stoll) announces he’s created exactly what Pym never wanted, a miniaturized battle suit called the Yellowjacket which he hopes to sell to the highest bidder, regardless of allegiance. 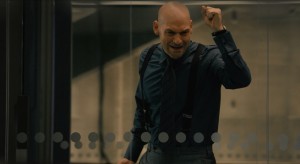 Unprotected overexposure to the Pym Particle can cause mental instability, which, of course, has turned Cross evil and makes him a formidable opponent, one whom Pym alone cannot stop. Cross’ plan hinges on replicating Pym’s successful human miniaturization, and it’s only a matter of time before he does. Only three things stand between Cross and world domination: Pym’s non-involvement with the Yellowjacket’s production; Hope Van Dyne, Cross’ assistant, also Pym’s estranged daughter who’s grudgingly carrying out Pym’s assignment to prohibit Cross’ success; and Scott Lang himself, who excitedly becomes Ant-Man under Pym and Hope’s tutelage.

Themes of the underdog and redemption in the eyes of our beloved reign through Ant-Man. For both Lang and Pym, it’s a shot to validate their existence in the eyes of their respective daughters, after having missed out on so much of their lives in pursuit of a higher ideal, which is why Pym chooses Lang in the first place. Both Douglas and Rudd play the absent-yet-extremely-caring fathers well, making for a believable pairing of like-minded heroes. Douglas plays a more kindhearted Gordon Gekko, yet with a similar focus and drive. As the daughter caught in the middle, Lilly is the standout performer in Ant-Man, having to balance pride with humility, anger with pity, and cynicism with innocence. Rudd’s got it easy, comparatively – he’s the man who’s eager to get back into good graces with everyone after his stint in prison, and he’s more than capable of commanding our attention as he goes from meek milquetoast to authoritative ant-commander and superhero. 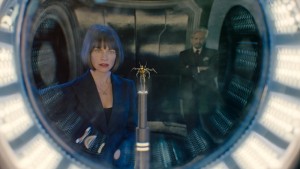 Ant-Man’s tone is cheeky, yet not subversive; it feels built to please everyone in the theater, which makes for a very canned kind of feeling. All the standard Marvel beats are hit at exactly the right times, when and how dramatic we expect them to be. Ant-Man’s biggest problem is that it feels too derivative for much of the movie. One can’t help thinking about how similar Lang’s recruitment is to Agent J’s in Men in Black; the “overheard confessional” trope gets trotted out when Pym tells Lang about his wife’s death, but doesn’t see Van Dyne listening around the corner; and, as must occur in these kinds of movies, there’s the stock-standard “massive failure blooming into massive success” training montage humorously showing Lang’s progression from zero to hero.

What Ant-Man gets right are the aesthetics, the performances, and the action. The smartly-timed transitions from miniature to full size – both physically as Ant-Man, and photographically switching from regular to macro for Ant-Man’s point of view – during fights and mission sequences dazzle in all the perfect places. This being Peyton Reed’s first mega-budget movie, he handles the balance between action and storytelling well, never boring or overloading the audience with weighty exposition or overly-hyper fight sequences. Similarities will be drawn between the verve and vibes of Guardians of the Galaxy and Ant-Man, and rightfully so; normal, unpredictable human nature faced with the extraordinary has never failed to win people’s hearts, which is what the charming cast and story does so well with Ant-Man. Avoid the 3D, because the action doesn’t allow you much time to appreciate it.