For the last ten years or so, we’ve seen a resurgence in the zombie horror genre. Starting with Zack Snyder’s bold remake of George A. Romero’s Dawn of the Dead, the nerd world and beyond has been gobbling up stories, movies, television shows, video games, and other forms of entertainment all having to do with the latest pastime: dealing with a zombie apocalypse. Hell, even Brad Pitt got in on the fun with his filmed adaptation of Max Brooks’ World War Z. All too often, those portions of entertainment deal with the violent side of the zombie uprising and the things one would do in order to survive it, leaving us to watch gory morality tales that only make us want to watch a more inventive zombie kill or the unlucky human that’s about to become the zombies’ lunch. 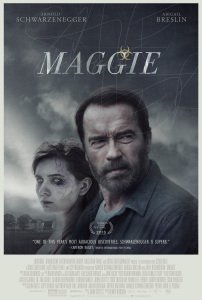 Enter Maggie, which can be summed up best as “a slice of how middle America deals with a loved one who’s been bitten by a zombie.” It can also be looked at as a thinly-veiled allegory as to how we reacted to AIDS patients in the 1980s, and it’s not hard to do so. Whichever way you view it, Maggie is an extremely thoughtful and matter-of-fact film that doesn’t bother with gore or nasty special effects. Instead, we watch as Wade Vogel (Arnold Schwarzenegger) tries to make the remaining time he has with his infected daughter Maggie (Abigail Breslin) tolerable, at the very least.

It seems that no one else but Wade wants anything to do with Maggie. The local law enforcement officers (J.D. Evermore, Douglas M. Griffin) want to get her to quarantine before she infects anyone else, the compassionate doctor (Jodie Moore) insists that a bullet would be better than what Maggie would receive in quarantine, and Wade’s wife Caroline (Joely Richardson) takes a kind of passive/aggressive stance of avoidance toward her stepdaughter. 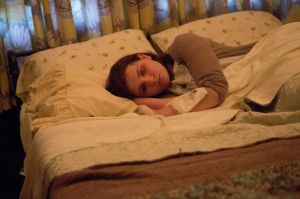 John Scott 3’s touching script takes us through Maggie’s final days as a human, chronicling the changes the Necroambulist Virus has wrought upon Maggie and taking us through each step as the disease shuts her down. This wasn’t meant to be an action picture or a horror movie; it’s instead meant to be just an examination of a life affected by the ravages of disease. To hammer this point home, think about this – Arnold Schwarzenegger, king of the ‘80s action movie, is seen holding a shotgun in this movie, but you never see him fire it. Not once. It’s almost a direct contravention to his former cinematic persona, which tells me that we’re not watching a stereotypical zombie movie or one of his usual roles.

Instead, we see a family trying to hold on to some semblance of “normal” in this decidedly abnormal new world. Schwarzenegger’s muted, somber performance is a heartbreaker, showing plainly the weight of the struggle he faces: does he try to protect his daughter or the community at large? He does well at exhibiting the pains of a father having to make horrible decisions in a time that couldn’t be more horrific; this is a new side of the actor that I’m seeing, and his performance more than anchors this film wonderfully. 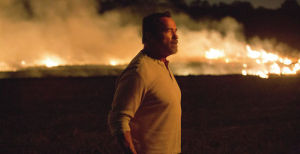 I applaud director Henry Hobson for eschewing the typical zombie trappings – gore, brains, blood, screaming and running – and giving us a quiet story about how this affects the heartland, not those in urban populations. He humanizes the epidemic, putting a face on something that, to me, never really had a face before. All my favorite zombie movies contain a lot of action and suspense, and yeah, I’ll admit to being a fan of the nasty special effects that are strewn about these movies like offal on a butcher’s floor. However, Hobson and Scott 3’s approach to the genre is a welcome one, giving us a film that takes its time for us to really see the effect of the zombie apocalypse and how it affects everyone in our microcosm. Maggie is a wonderful, thoughtful movie which, while it doesn’t pull its punches, is exactly what it needs to be: an emotionally charged story of a father’s love for his daughter.
And, y’know… zombies.