Posted by Michael Parsons on May 7, 2015 in Movie Reviews / No Comments

In the limited realm of PG-13 zombie fare, “Maggie” focuses entirely on something that films like the comical “Warm Bodies” and the action-blockbuster “World War Z” leave out: that long, nasty transformation from being human to being undead.

This otherwise dramatic indie flick from first-time director Henry Hobson (heretofore credited mostly for designing credits), which looks to be a metaphor for the awkwardness of adolescence, among other things, has little else to offer premise-wise, though that’s not necessarily a bad thing. “Maggie” knows exactly what it is — the story of a father spending every last moment he can with his recently infected daughter — and at the very least, that’s something a little more meaningful than another allegory for mass consumerism. 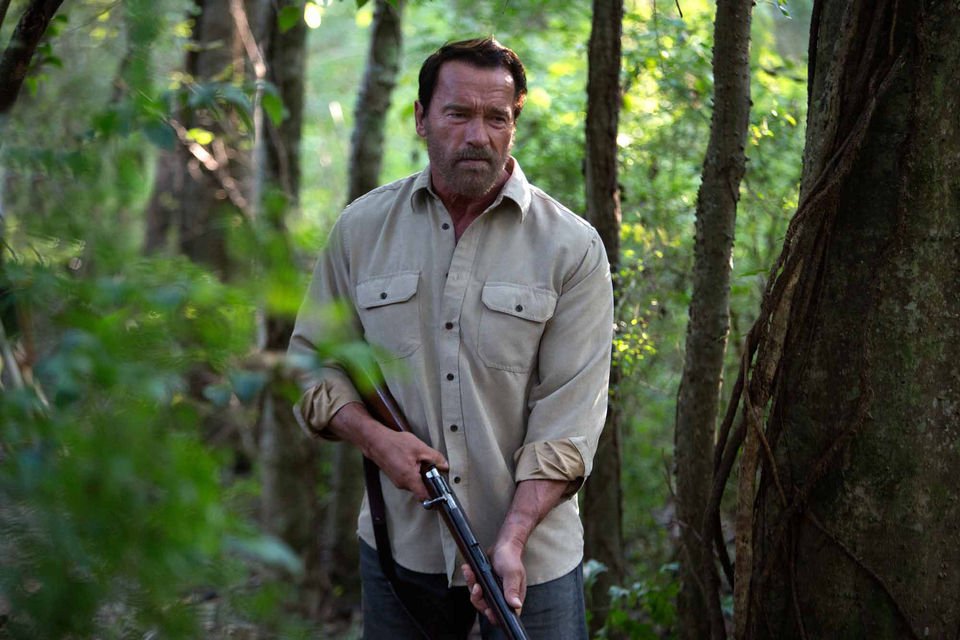 The movie also knows what it isn’t, which makes the casting of Arnold Schwarzenegger as the bereaved father of Abigail Breslin’s unfortunate title character pretty intriguing, because Hobson’s artsy slow-burn is the very antithesis of a Schwarzenegger flick, light on action and so heavy on atmosphere that it oftentimes feels stagnant.

This one requires some acting chops, and let’s face it, they’re not exactly drawing from the Oscar pool here. But Arnold pulls it off (and without kicking anybody’s ass at that), though the film is so solemn that he could probably have gotten away with sitting pensively for its duration.

This particular incarnation of walking dead, of whom we see very few during the film, are the product of something called the necroambulist virus, the effects of which we become quite familiar with over an hour-and-a-half of what feels a bit like “Pet Sematary” in reverse.

But ultimately, the horror of “Maggie” is more akin to the realities of an aggressive cancer than that of flesh-eating monsters, as Schwarzenegger’s Wade, a farmer out in the Midwest, is allowed to bring his teenage daughter home to live out her last six weeks amongst the family, which includes her stepmom Caroline (Joely Richardson) and two young step-siblings, and she even gets a night out with her undead-to-be boyfriend (Bryce Romero). Understandably, Caroline is concerned about the contagion, as are the local police, who come to see Wade after he’s forced to “kill” two of the neighbor’s undead kids.

Later, after an accident leaves her with one less finger, the doctor sends Maggie on her way (“You have a strong heartbeat – that’s a good sign”, he says), as the inevitable day draws nearer. How the authorities are keeping the zombie apocalypse under control while releasing the newly infected into the custody of their families is one of the film’s many unanswered questions.

But focus on the father-daughter relationship, and you’re bound to get teary-eyed at least once (as does Schwarzenegger, convincing enough in one of Hobson’s many close-ups). “Maggie” isn’t half bad as a kind of refined take on the whole genre, mining the zombie thing for at least a couple or original ideas, though Hobson and screenwriter John Scott III eschew most of what your typical horror fan will probably be craving.