The opening of Quentin Tarantino’s script for Pulp Fiction reads, “Three Stories… About One Story…” It was a triumph of a multiple perspectives, going on to influence the film world in so many ways. One of its bastard children hits US screens today, a fast-talking, double-crossing hoot of a film called Kill Me Three Times. While not as witty or as well-constructed as Pulp Fiction, Kill Me Three Times is powered by its intrigue and its odd hero/villain Charlie Wolfe (Simon Pegg), as he wends his murderous way through this sleepy Australian seaside town. 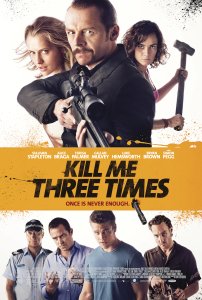 The rest of the characters are fairly archetypical for a film like this. We’ve got Alice (Alice Braga), the damsel in distress, whose sneering, obsessive (and overly possessive) husband Jack (Callan Mulvey) thinks that she’s cheating on him with pretty boy Dylan (Luke Hemsworth). Let’s not forget doctor Nathan (Sullivan Stapleton) who’s going to help the damsel disappear, and his scheming receptionist Lucy (Teresa Palmer) who’s got a few tricks up her sleeve. To round it all out, there’s the cop (Bryan Brown), who’s got his corrupt little fingers and toes in all the pies in town.

Where does Charlie fit into all of this? He’s the man who can get it done. Surveillance, murder-for-hire, you name it – he’s good at it. In fact, he’s a little too good at it, and he relishes being the stereotypical hitman, dressing in black and delivering pithy, schlocky, predictable comments with each shady deal or transaction. The way the film is written, he’s the guy you kind of wind up rooting for, hoping that he gets his money and his happy ending. Pegg plays Charlie like a man who’s managed to make a living rolling around in the mud of society, enjoying the little bits of justice he gets to dole out. It may be his own brand of justice, but it’s justice nonetheless.

It’s a very odd thing, to root for the guy who’s running around and killing everyone. There’s precious little else to really get behind, as everyone else is shown to be varying shades of despicable. Aside from not liking the way her husband treats her, is there much of a reason to like or support Alice or her side guy? Not really; they’re only there to provide some kind of narrative thrust and flow. Everything centers around them, but they wind up not being almost non-entities in their own story.

The true joy of Kill Me Three Times is to watch the double-crossing unfold. Everyone’s got some kind of angle they’re playing, and not a single person in this film can be called “innocent” with a straight face. First-time writer James McFarland’s script is serviceable, getting the job done without much fanfare or wizardry. Thanks to good pacing and direction by Kriv Stenders and Pegg’s hearty central performance, Kill Me Three Times is perfectly enjoyable, even though the twists may be standard and not much of a surprise. It’s a movie that feels like you’ve seen it a thousand times before, but this thousand-and-first time is still a fun time.