Isaac Asimov’s Zeroth Law of Robotics states: “A robot may not harm humanity, or, by inaction, allow humanity to come to harm.” In the 2004 film very loosely based on (it actually says “suggested by,” not “based on” in the credits) Asimov’s I, Robot, we see the evolution of this Zeroth Law into something very frightening, as we see a vast computer intelligence base its actions upon extrapolating the only end that humanity could ever give itself, and that is the ultimate destruction of humankind and the Earth as we know it. So, in the film, what does this intelligence do? It starts hunting those who could possibly undo its plans, and eventually unleashes a firestorm of robot sentinels to do its bidding. The robots turn evil – well, evil in our eyes, but in the eyes of the intelligence, it’s merely protecting humanity from itself – but there’s no stopping the unpredictability of human nature, which eventually triumphs.

I was trying to put my finger on what made Avengers: Age of Ultron so familiar to me, and this was it – it was almost a near-remake of Alex Proyas’ I, Robot. Only, y’know, with The Avengers in play instead of Will Smith. Make no mistake – viewed as a member of the Marvel Cinematic Universe (MCU), Whedon gets almost as close to perfection as you can get, nailing each character’s personal tone, inserting a relevant dose of social commentary on today’s times, splashing humor and wit throughout, and making sure that every character – man, woman, or other – is strong and meaty. 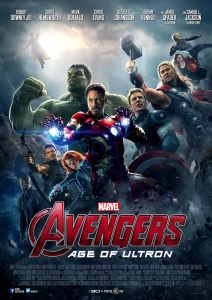 What’s also great is that The Avengers are entirely responsible for the film’s plot. This isn’t some fight against Hydra, S.H.I.E.L.D’s nemesis; this is a result of saying the right thing in the wrong place at the right time. “Peace in our time,” Tony Stark (Robert Downey Jr.) offhandedly mumbles to Bruce Banner (Mark Ruffalo), as they investigate the power behind an Asgardian scepter, recently reacquired from an Eastern European Hydra base in a thrilling firefight. During said firefight, he is given a glimpse at his worst fear: the annihilation of the human race and the death of his family of superheroes. With this vision fresh in his mind, he and Banner set about to use the intelligence in the scepter for something Stark calls “Ultron” – the one Iron Man to end all the Iron Men. One sentient robot being possessing an artificial intelligence unlike anything we’ve ever seen, sent to police the world, end wars, and bring about a new age of unity and peace. “Isn’t that the mission?” Stark says of the eventual goal of the world not needing The Avengers.

Through crazy random happenstance, Ultron is given corporeal form and a voice (the latter of which is provided by James Spader), and instantly goes to the internet to see what he’s dealing with. Of course, he sees a history of humanity and its violence; what’s an artificial intelligence to do? It’s a theme we’ve seen in the aforementioned I, Robot and in Luc Besson’s The Fifth Element – humanity must be destroyed to protect it from itself, so Ultron prepares to do so. Using “enhanced humans” Pietro and Wanda Maximoff (Aaron Taylor-Johnson and Elizabeth Olsen), respectively gifted with super speed and manipulative (physical and mental) abilities, Ultron creates an army of robots that all share his consciousness. How do The Avengers fight an enemy that can jump in and out of computers and possesses no central being? More importantly, how can The Avengers keep from fighting amongst themselves? Each of them is attacked by Wanda – also known as the Scarlet Witch – and shown their worst nightmares or their worst secrets, giving rise to mistrust and discord. 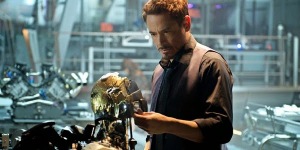 Looking at this synopsis now, I can’t help but feel like we’ve seen all of this before. Similar themes and character beats seem merely dropped into a nearly paint-by-numbers script, hoping that the action and humor for which Joss Whedon is so well-known will carry the film. Non-begrudgingly, it does, at least for me. There are sharp character moments that further define these heroes we’ve been watching for seven years; Natasha Romanoff (Scarlet Johansson) and Clint “Hawkeye” Barton (Jeremy Renner) are the beneficiaries of some well-deserved character development, often catching us off-guard with how deeply personal their stories can get. As a newcomer to the MCU, James Spader provides Ultron with an oozing, unctuous tone that goes quite nastily with his forceful actions and his brutal tactics.

Yet I can’t help but feel that we’re rushing toward some kind of endgame, with Marvel’s The Avengers and Avengers: Age of Ultron being quick stops on the way there. There’s a lot of action in Avengers: Age of Ultron, and there’s lots of laughs, too; however, all of that is almost totally forgettable. What isn’t forgettable are the interpersonal conflicts and exchanges that Whedon mines out of his characters. A wood-chopping scene between Captain America (Chris Evans) and Tony Stark lays bare their intentions and how their backgrounds influence them, and Romanoff’s history as told to Banner may turn your eyes watery for a bit. The marginalization of women, the concept of benevolent intelligence, and our nature to alternately create and destroy are all themes touched upon in Avengers: Age of Ultron; between this, the character development, and all the action, it’s a miracle the film is only 141 minutes long.